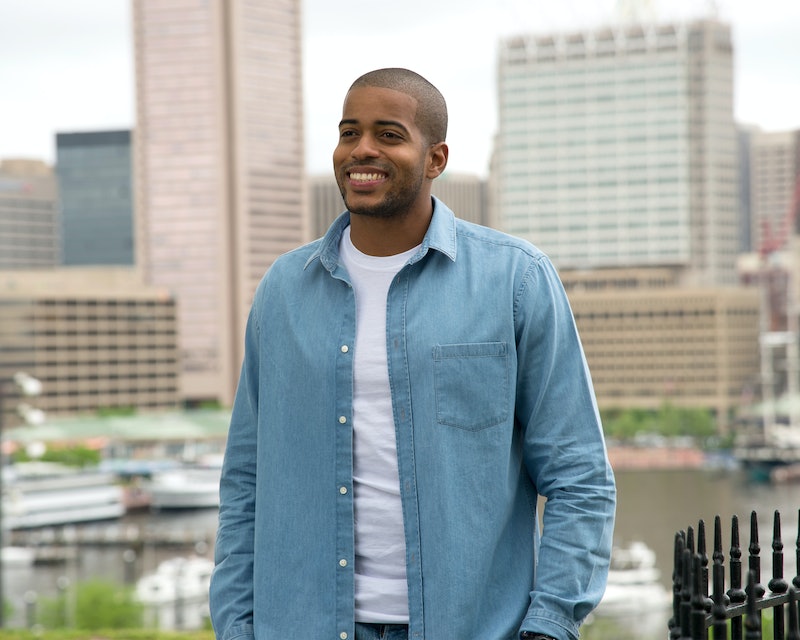 The quest for the next star of The Bachelor has begun, and fans have lots of theories. There are a few contestants from Rachel Lindsay's season who would make great candidates, and it's totally possible that Eric Bigger is the 2018 bachelor. Eric, a 29-year-old personal trainer from Baltimore, won over Bachelor Nation. Unfortunately, he ended up seeming unprepared to commit. After admitting that he'd never told a woman he loved her or brought a date home to meet family, Rachel wasn't sure if he was ready for marriage. However, time has passed, and Eric has proved to be mature and ready to find romance. There are a lot of reasons the super charming star would make an excellent Bachelor, and it seems like he is open to the opportunity.

It might be a bit longer until the franchise announces its next suitor. While there are plenty of rumors, there have been no official announcements regarding future seasons of the show. In fact, after the final rose was handed out on The Bachelorette, host Chris Harrison claimed in an interview with ET Online that ABC hadn't yet selected their next man. "Dean, Peter, Bryan, Eric. There's four great candidates right there," Harrison told the publication. "They'd all be great Bachelors, they would. I can't poke a hole in any of them, but in all seriousness, we've not picked a Bachelor. So, I can tell you, no Bachelor is chosen." If the franchise is going to keep fans living in suspense, it's important to turn to social media and other interviews for information. Here's all the evidence that Eric could be the show's next star:

He Would Welcome The Opportunity (And So Would Fans)

In a recent interview with People, Eric said that he hadn't yet been approached by ABC. That doesn't mean the network won't reach out to him, and if they did, he wouldn't rule out the opportunity. "No, I haven’t been approached,” he told the publication. “The universe is approaching me. Everyone’s talking about it!” In the same interview, he also said that he has grown since his season. "I would probably think about some of the things I went through, but I know how to get myself to open up, and if it’s the moment to find love, I’ll let it happen."

Eric won Rachel over with his fun-loving attitude, and if he were selected for to star on the series he would definitely bring this personality to the show. While recent Bachelors have largely been more subdued (it's hard to deny Nick Viall was a nonstop snooze fest), Eric might breathe new life into the show. "I haven’t really watched too much of the past Bachelors," he told People. "But I don’t know, I just think I just bring a different dynamic and different energy.” If the network want a bachelor with lots of charm, it would be difficult to pick someone better than Eric.

The Producers Set Him Up As An Option

Eric's exit from the show was super gracious, and he had nothing but positive things to say about his experience. During the "After The Final Rose" episode, the producers gave him the "Bachelor edit", meaning he's definitely a contender for the spot. While some contestant's "After the Final Rose" interviews are consumed by drama or bitterness, Eric seemed only grateful for the experience. He said that he definitely loved Rachel, but is still open to finding the true love of his life. Could the next season of The Bachelor be his time to do so? Only time will tell.

He Would Be A Smart Choice

At the beginning of the season Eric got off to a rocky start, but it was mostly because the true villains in the mansion antagonized him. He communicated well with Rachel, though, and it was during his hometown date that Bach nation really fell for him. He seems genuinely caring and charming, and was level-headed. It would be in the show's best interest to cast someone who not only has a lot of charisma, but who also is positive and goal-oriented. After all, in order to be the Bachelor and truly find love, you have to be optimistic about the process.

ABC has not yet revealed when the announcement will go out. There are a lot of great candidates from Rachel Lindsay's season, but Eric has the perfect attitude to be the next Bachelor. He's charming, positive, and ready to invest in the process. He's ready to find love, and fans are ready to watch him do so on national television.