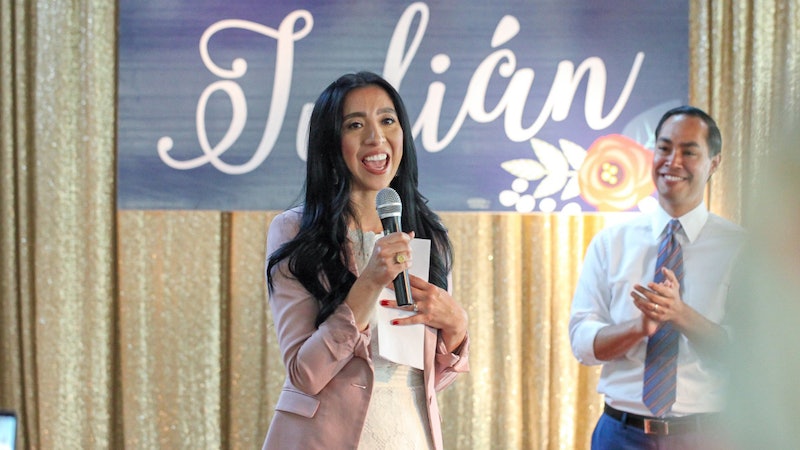 Courtesy of the Castro campaign

Erica Castro is tearing a paper straw wrapper into limp confetti. She’s just wrapped up a brunch event with supporters of her husband, presidential candidate Julián Castro, and I’m sitting down with her at a Starbucks in San Antonio over iced coffee (me) and iced tea (her). “Prior to Julián, I knew nothing about politics, was never involved in anything political prior to meeting him,” she tells Bustle. “And so it has been a learning curve for myself.”

While Erica, who works in education, has largely (and gladly) left the political arena to her husband so far, the campaign occasionally requires her to go outside her comfort zone. Still new to the spousal duty of giving a speech to a roomful of strangers, she called out what she said was mismanagement of the Department of Education under the Trump administration during the Women for Julián brunch that Bustle attended in late September.

“I have been an educator and an advocate for 16 years,” she said to the attendees. “When I see this president and the secretary of education, Betsy DeVos, running to cut school funding, I can only think one thing: We all deserve better than this.”

Publicly disagreeing with people in power, as well as being in the spotlight, seems to make her uncomfortable, which makes sense. It is especially difficult to take on new things — public speaking, interviews with the press, constantly meeting new people — on a national stage, where any mistakes reflect on more than just you. Despite this tension she feels in her role as presidential campaign surrogate, Erica is forthright when I ask about how their family values influence Julián’s campaign, the near constant waves of teacher strikes around the country, and raising their children.

Julián had a copy of the San Antonio city council map on his wall when he was a student at Harvard Law. Erica found it charming when she visited him on the East Coast. To her, the map was a sign of Julián’s ambition and commitment to their hometown. She had just started teaching elementary school math when she met Julián through a friend of a friend the summer after his first year at law school. She knew there was something about the man with the council map on his wall that intrigued her.

"We still want the same things that a lot of American families want."

The pair dated for eight years before getting married in 2007. “We were at the start of our own careers, so that kept us both busy,” she says, adding that having children was always the plan. Their first child, Carina, was born in 2009, when Julián had just been elected as San Antonio’s mayor. He took a position as secretary of housing and urban development under former President Obama in 2014, and their son, Cristián, was born that same year. Each child came along at an incredibly stressful time in their lives, but Erica says “there was no doubt in either one of our minds whether to have children or not despite our schedules, and so we made it work.”

Over the course of their relationship, Julián has run for city council, mayor of America’s seventh-largest city, and now president. If he wins, the Castros would become the first Latinx first family in U.S. history, and Erica acknowledges the pressure that comes with that territory. “We still want the same things that a lot of American families want,” she says. “We want great schools for our kids. We want access to great health care. We want to live in great communities where there's great jobs available for people in the community.”

“Yes, we may be Mexican American, but we still want the same things,” she adds. “We still hold true to our own family values as every other family does.”

Erica always knew her life’s work would be in education, just as Julián’s life was always on a trajectory toward politics. “I don't ever remember, when I was younger, not wanting to be a teacher, if that makes sense,” she says. “I remember, as a young girl at home, playing school with my brothers or friends that would come over.”

She grew up on the south side of San Antonio, a predominantly Hispanic area, where she and her brothers were raised by a single mother and saw their father on the weekends — “the divorced child’s schedule,” as she calls it. Erica was one of the first people in her family to earn a bachelor’s degree, and after graduating from the University of Texas at San Antonio, she returned to teach at the same Title I district — meaning the schools receive federal funding to help children of low-income families — in which she was enrolled 20 years earlier. Eventually, she’d earn a master’s degree from her alma mater and, after more than a decade in the classroom, move into a position as an instructional math coach, who works with teachers and administrators to develop instructional goals and lesson plans.

"It's a shame that teachers are having to resort to that, but I'm glad that they are."

As an educator, Erica has seen how poverty and instability affects young students. The school where she began teaching had an extremely high mobility rate, meaning the percentage of students who moved in and out was high. “I could start off the school year with a certain group of students,” she says. “By the end of that school year, it wasn't the same group of students.”

Erica says that if her family were to move to 1600 Pennsylvania Avenue and she were forced to leave the school district, she still would want to be involved in education. She believes politicians, including Democrats, can do more to support educators. She wants teachers to be provided better books and classroom materials, as well as extra hands inside and outside of the classroom, and wants to end the shaming of student lunch debt, a practice that publicly marks students whose parents owe meal fees. “As educators, we service the whole child. We service their social and emotional needs. So that takes a lot of resources” for teachers to do their job effectively, she tells Bustle.

It’s with that in mind that Erica insists teachers are right in striking to protest increasing class sizes, rising health care costs, stagnant wages, rapidly shrinking budgets, and cuts to resources. Over the past two years, teachers have gone on strike in at least seven states, most recently in Colorado, California, and West Virginia.

“I applaud these educators for taking a stand and not only advocating for themselves, but really they're advocating for their students. It's a shame that teachers are having to resort to that, but I'm glad that they are,” she says. “All our students throughout the country deserve a quality education, and unfortunately many of them are not receiving that.”

Erica believes her husband can change the education system in the United States for the better, and she believes his policies would improve the lives of the children she has spent her life teaching. His education plan would create “universal, high-quality, publicly funded, full-day pre-K,” raise pay for teachers, and make public universities tuition-free. It also acknowledges the structural forces that underpin continued segregation in U.S. schools and demands better protections for students in the LGBTQ and disability communities. It’s one of several intersectional proposals from a campaign built on the ethos of “People First.” But even after a series of debates in which he had a few breakout moments, Julián lags well behind his opponents in fundraising and struggles to register support in polls of early voting states. According to the RealClearPolitics poll average, support for Julián is lower than for Rep. Tulsi Gabbard, who failed to qualify for the September primary debate, and billionaire Tom Steyer, who has spent nearly $48 million since he launched his own presidential vanity project in July.

Yet the Castros continue to campaign for a better future for their own children, and everyone else’s. That’s why Erica was drawn to a career in education. Now, she’s seeing her own children fight for the causes they care about. Their 10-year-old daughter, Carina, who saw young Swedish climate activist Greta Thunberg’s speech at the United Nations in September, keeps the family accountable for their imprint on the planet. “I’ve been very proud of her in that she's also picking up that message, making sure that we're doing our part and she's doing her part,” Erica says.

Carina’s interest in climate change and Cristián’s looming pre-K start has informed Julián’s campaign policies, according to Erica. “In the back of his mind, he always has his kids,” she says. Those policies, which the campaign has bundled under its agenda for working families, include raising the minimum wage, family sick leave, and tax credits for families. That’s Julián’s platform, but it’s really Erica’s, too. She’s essentially a single parent at the moment. When her husband is on the campaign trail, she’s either working on lesson plans or making sure the children have eaten, arrived at school on time, and made it to all of their activities. This would be impossible without the help of her village of supporters, which includes her mother and mother-in-law. “I don’t know how I would do it without family,” she says, conscious that not everyone has the same resources.

“I know how special my children are to me, and these children that I'm working with, I know that they're just as special to their parents,” she says. “So I want to make sure that they're getting what I would want for my kids.”