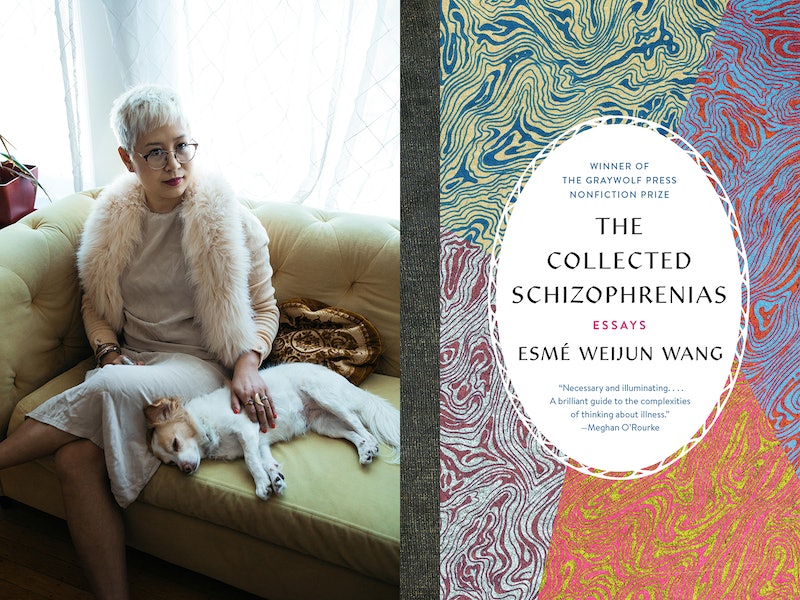 A long-time blogger and writer, Esmé Weijun Wang didn't initially set out to write about schizoaffective disorder. "There was a period of time when I did not think that, first of all, I would ever be particularly 'out' about having mental illness," Wang tells Bustle in a phone conversation. "And certainly not severe mental illness."

And yet, Wang writes about mental illness with clarity, precision, and vulnerability in her new book, The Collected Schizophrenias, a book she began while in the process of sending her novel, The Border of Paradise, to publishers. (After being rejected 41 times, the book was published in 2016.) While waiting on feedback, she began writing essays, and in 2014, "Perdition Days: On Experiencing Psychosis" was published on the now-defunct site The Toast.

The visceral essay begins: “I write this while experiencing a strain of psychosis known as Cotard’s delusion, in which the patient believes that they are dead.” Wang details the severity of her delusions — how they affect her everyday interactions with her partner and with others — and her efforts to get medical help.

"I write this while experiencing a strain of psychosis known as Cotard’s delusion, in which the patient believes that they are dead."

Even in passages that recount difficult moments in her life, Wang’s wit is palpable. In "Perdition Days," she describes a scene in which a young man turns to look at her as she walks into an electroconvulsive therapy consult. She is suffering from "psychic torture," but doesn't want to show up looking like a mess. She wears lipstick, and a thoughtfully chosen outfit. When the man turns to look at her, she thinks: “Yes, I thought, our eyes meeting, you may think I’m hot, but I’m also a rotting corpse. Sucks to be you, sir.”

During one particularly poignant essay in the book, Wang discusses Beware the Slenderman, the 2016 documentary about Anissa Weier and Morgan Geyser, two 12 year olds who stabbed a friend in 2014 after becoming obsessed with Slender Man, a fictional creature with roots on the Creepypasta Wiki. (Both Geyser and Weier were eventually diagnosed with some form of schizophrenia.) Wang sees parallels between this story and her own childhood delusions about the fictional world of Fantasia from The NeverEnding Story.

Wang writes: "One could say of my younger self that she was simply highly imaginative. Spirited. Already prone to storytelling, which would make sense for her future self — the novelist, the writer… If Anissa and Morgan had never attacked Payton Leutner, they might have not been diagnosed with any form of the schizophrenias as preteens. They might have been called cheerful, spirited, and highly imaginative until some future year, in which they wandered into a fracturing of their realities that could not be denied."

Reporting on schizoaffective disorder needs more nuance, but so do fictional accounts of mental illness in general, Wang argues. For example, Claire Danes’s character Carrie Mathison in Homeland has bipolar disorder and begins taking Clorazil (also known by its generic name, clozapine), which according to the National Alliance on Mental Illness, is used to treat schizophrenia.

Wang stresses that in her experience, this medication serves as an "anti psychotic of last resort" and includes “so many side effects,” that the choice is a strange and unrealistic one.

“I know that there are a lot of people who say that mental illness is so much more accepted in pop culture now,” says Wang. “But I still find that it's very rare that something like this psychoaffective disorder or schizophrenia or something more 'scary' might be included in pop culture. I would like to see somebody, a character in some kind of movie or TV [show] who’s a person who is living with this thing.”

"But I still find that it's very rare that something like this psychoaffective disorder or schizophrenia or something more “scary” might be included in pop culture."

Although Wang spends quite a bit of the book talking about public perceptions of schizophrenia, The Collected Schizophrenias is also a testament to her own journey, rocky as it has been. In addition to writing books, Wang currently runs The Unexpected Shape, a blog and online business that offer resources for people "living with chronic illness and other forms of limitation." Wang, who also has late-stage Lyme disease, is painfully aware of her own limitations, and hopes to help people manage their own.

Readers might find some solace in the knowledge that, while it’s not an easy journey to find the right diagnosis, medication and support, it is possible. The Collected Schizophrenias asks that readers not try to guess anyone’s story — and implores that they listen closely when and if someone chooses to share it.

More like this
Prince Harry Incorrectly Recites Christina Aguilera’s “Genie In A Bottle” Lyrics
By Jake Viswanath
'That '90s Show' Star Callie Haverda Got Advice From Mila Kunis & Ashton Kutcher
By Brad Witter
The Mysterious Gunther Corporation From 'Gunther’s Millions' Has Dissolved
By Brad Witter
Rachel Nickell’s Son Wants The Police To Take Accountability Over Errors
By El Hunt
Get Even More From Bustle — Sign Up For The Newsletter
From hair trends to relationship advice, our daily newsletter has everything you need to sound like a person who’s on TikTok, even if you aren’t.