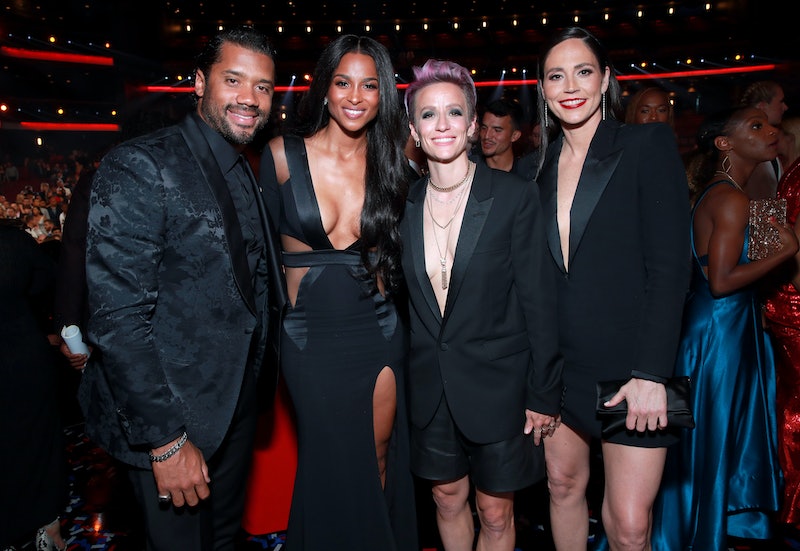 Russell Wilson, Megan Rapinoe and Sue Bird are dressing up for the ESPYS 2020, even if they are not going to be held in a packed theater like they have been in the past. This year, Wilson, Rapinoe and Bird were virtual hosts of the show, and they used the opportunity through fashion to speak out on important social issues.

Rapinoe and Bird posted a series of photos on Instagram on Sunday, in preparation for the ESPYS. In one photo, they both wore black pants and black T-shirts that read “Black Lives Matter." Wilson wore the same shirt in a video clip shared to Twitter. Designed by Meena Harris, Founder and CEO of Phenomenal Women, the shirts can be shopped here (with a variety of other BLM-themed merch) for $40.

In another image, Rapinoe is clad in a white suit and black T-shirt, while Bird stands as her inverse in a black suit and white T-shirt, with each top reading GF in reference to George Floyd. The T-shirts, designed by Fear of God and 6 other Black-owned brands, are currently sold out, but were selling on the brand’s Instagram channel at the beginning of the month for $100. 100% of the proceeds from the sale were donated directly to the Gianna Floyd Fund, which was established on behalf of George Floyd’s youngest daughter. What’s more, though, with their second look, the pair slipped into a pair of Michael Jordan kicks, noting in their caption that he was the first Black designer in sneaker history.

See all their looks, and shop the "Black Lives Matter" shirt, below.