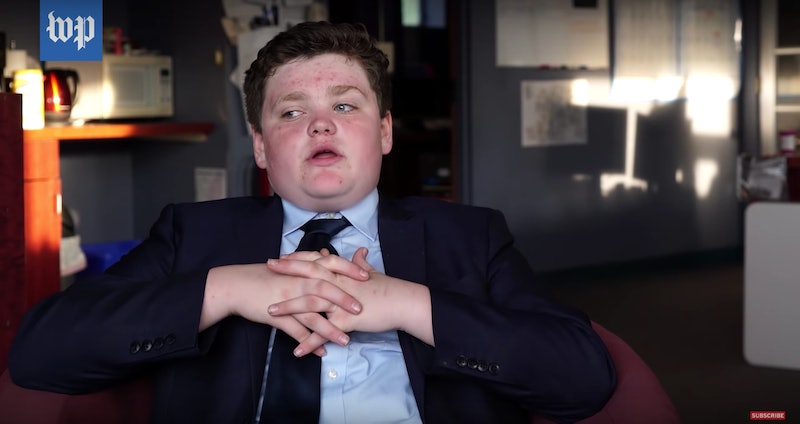 In a move that may surprise some observers, one 14-year-old has decided to run for governor's seat in Vermont. Meet Ethan Sonneborn, originally from Vermont's Bristol area, who has made media airwaves due to his young age and high political aspirations. In a video interview with The Washington Post uploaded on Aug. 9, Sonneborn said he was compelled to be more politically active after August 2017.

The Post reported that Sonneborn was compelled take a more active role in local politics after observing the white supremacist rally in Charlottesville, Virginia, in 2017. The deadly rally claimed the lives of three people, including an anti-racism protester named Heather Heyer. "I think what pushed me over the edge were the events in Charlottesville, [Virginia]," Sonneborn told The Post. "It was the first time I had this realization that a new generation of leaders would be better."

Some might think that Sonneborn is too young to be participating in gubernatorial politics. But under Vermont's state law, he is eligible to run on a gubernatorial seat and will appear on the state's primary ballot on Tuesday. In a recorded governor forum, Associated Press reported that Sonneborn said, "I think Vermonters should take me seriously because I have practical progressive ideas, and I happen to be 14, not the other way around. I think that my message and my platform transcend age."

The state law works in Sonneborn's favor. Sure, the teenager isn't legally permitted to drive yet but he can still run on a gubernatorial ticket in his state. After all, under the Vermont constitution, there is no age limit. The requisite for aspiring governors is that they must have lived in the state for more than four years.

On his website, Sonneborn articulated some of the issues that he would run his gubernatorial ticket on. In terms of youth engagement, a seemingly critical element of his campaign, Sonneborn wrote, “A major reason I decided to run was because I saw apathy from young people in my community. I decided that something had to be done about dismal voter participation rates. We need to encourage young people to get involved in politics, because today’s decisions are their tomorrow.”

When it comes to health care, Sonneborn touted himself as a proud support of fellow Vermonter Sen. Bernie Sanders and his position on universal health care. “No Vermonter or American should die because they cannot afford health insurance,” Sonneborn wrote. On the issue of LGBTQ rights, Sonneborn wrote that he is in favor of supporting civil rights for the community. If elected, Sonneborn would back “employment non-discrimination legislation and would commit never to support a candidate who couldn’t back this common sense issue.”

Environmentally, Sonneborn would back a carbon emissions tax and when it comes to the state’s education system, he said he would stand against filling the pockets of administrative bureaucrats and would support helping teachers instead. For those who lean on the progressive side, the 14-year-old’s campaign — regardless of how young he is — could be hard to disagree with.

It’s difficult to say if Sonneborn will secure Vermont’s governor seat. But he doesn’t seem bothered. According to Associated Press, Sonneborn is more keen on political participation from young people. “I think if I can get one person who wasn’t involved in the political process before involved now, then my campaign will have been a success,” he said.