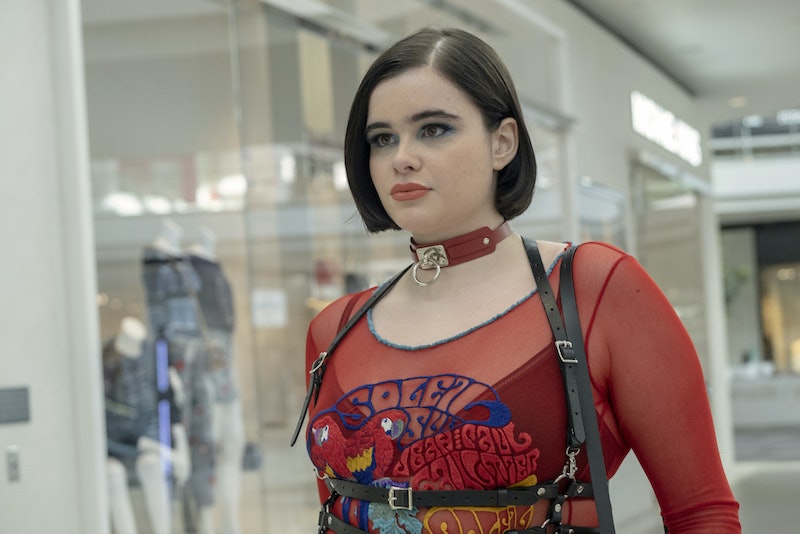 Every person in HBO hit Euphoria is going through some type of emotional journey. But the character who is most visually transformative in the series is Kat Hernandez, played by actress Barbie Ferreira, best known on the show as the designated undesired "fat girl." When audiences first meet Kat, she’s introduced as a quiet, bespectacled, One Direction fan fiction-writing virgin, who wears understated makeup. “At first [she’s wearing] a tiny bit of black eyeliner, some smudgy black mascara, no foundation, no eyeshadow, no lip color, maybe a lip gloss,” Doniella Davy, the show’s makeup department head, tells Bustle. But Euphoria wasted no time in changing that technicality.

As Kat loses her virginity, becomes a cam girl, and her sexual journey progresses throughout the season, her makeup becomes more daring and avant-garde. “Through getting all this male attention on the internet, she understands [her authority] now," Davy explains. "She's starting to use makeup to be like, ‘Who do I want to be today?’ And she's trying out all this stuff.”

Kat's looks are not like Maddy Perez's (Alexa Demie) bejeweled cat-eye or Jules’ (Hunter Schafer) neon negative space eyeliner, but edgy in her own gothy, punk, bad-girl sort of way.

Kat's goes from dressing modestly and wearing glasses to popping in contacts, experimenting with bold eyeshadow, red lipstick, mini skirts, fishnets, and bondage-inspired clothing, courtesy of her new income. But despite Kat being portrayed as shy during the premiere, Davy says that Kat always knew who she was, but through discovering her sexual power, she found the confidence to let it out.

“Her new look [throughout the season] was meant to be like a rebellious, alternative version to glam makeup and a total f*ck-off to all things precious and subtle and pretty and perfect,” the makeup artist explains.

In one pivotal scene, Kat heads to the mall wearing head-to-toe red, a commonly known power color, accessorized with a gift from one of her “cash pigs”: a body harness. The mall-goers watch her walk by with her powerful self-assurance, their mouths agape as Kat’s voiceover says, “I spent my whole life afraid that people were going to find out I was fat, but honestly who gives a sh*t? There’s nothing more powerful than a fat girl who doesn’t give a f*ck." In that moment, it becomes clear Kat fully understands her dominance, and how she can use to beauty to gain control over men.

While all of Kat's looks are badass, one of her most memorable is, as Davy describes, the “froggy green eyeshadow” that she wears to the town carnival. Although it appears muted in Euphoria’s moody, dark lighting, in real life it’s actually loud, bright, and very Kermit the Frog-esque. Davy used NYX's Vivid Brights Creme Color in True Green to create the look; and the bold hue paired perfectly with the scene. Here, Kat shamelessly wrangles and has sex with Luke Kasten, an older guy who went to their high school with a well-endowed reputation who Kat calls a "f*cking god." Their hookup was a massive conquest for her, and the she had the commanding makeup to match.

"I thought, OK, let's outline her red lips with black and that'll have a more experimental feeling to them," Davy says. "And then the upside down crosses are something that I think is just like a total f*ck you to all things religion and church and nun-related, and went in line with the feeling of this character that she was dressing up as. It just felt appropriate and cheeky, and kind of offensive in a good way. It's meant to elicit a certain response."

While anti-religion messaging in the makeup is quite explicit, it's also later revealed to be another symbol of Kat reclaiming her power over the men who once rejected her for her size. She ends up hooking up — on her own terms — with Daniel (Keean Johnson), her ex-boyfriend from sixth grade, who broke up with her after she gained 20 pounds from drinking “72 virgin piña coladas” while on vacation.

After Kat and Daniel have sex, she brings up their middle school romance, and he doesn’t remember it. You see it on her face — underneath the smudged lipstick and heavy eyeshadow — she’s experiencing rejection all over again. It’s a reminder that while Kat has this new sexual confidence, she is still very much on a journey.

“My dream for Kat is that she doesn't have to look for male attention to be able to get the validation that she needs and wants to be herself,” Davy says. “But I think for the time being, that's been the motive and has helped her make that transition.”

Although Kat's entire persona, and makeup, changed drastically throughout Season 1 of Euphoria, Davy makes it clear that she never wanted Kat's look feel like the stereotypical good girl-goes-goth.

"I think there's more to her than that, and I didn't want to just label her as [such]," she says, hinting that this is only the beginning of her journey. "The whole point is using the makeup to ebb and flow and evolve with the characters as they are changing and figuring out who they want to be, or who they feel like being, or who they need to be that particular day to survive."

More like this
A Guide To Overlining Your Lips, Straight From A Celeb Makeup Artist
By Olivia Rose Ferreiro
15 Must-Have September Beauty Launches, According To Our Editors
By Rachel Lapidos
This Week’s New Makeup Releases & More Beauty Headlines
By Audrey Noble
12 Bellissima Beauty Moments From Milan Fashion Week S/S 2023
By Olivia Rose Ferreiro
Get Even More From Bustle — Sign Up For The Newsletter