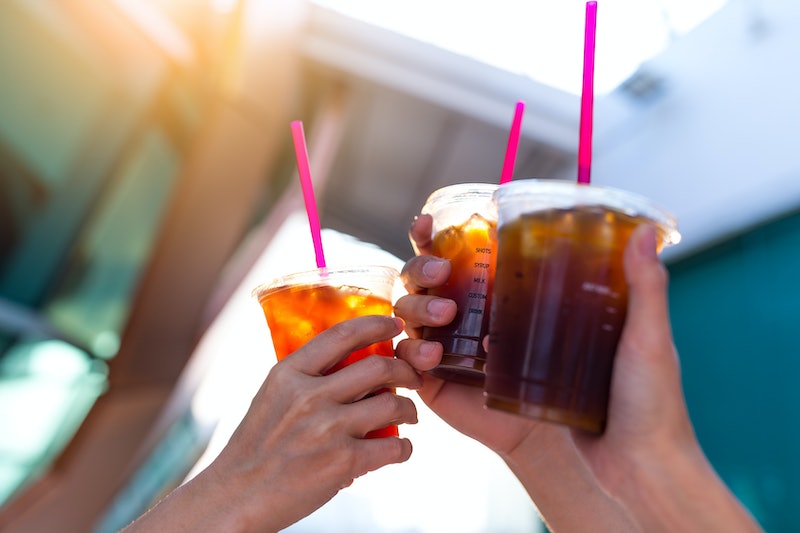 Over the past few years, public awareness of just how much single-use plastic we produce and discard has been rising, and out of that awareness has come policy changes to cut down on plastic waste. From California's wholesale ban on plastic grocery bags to McDonald's locations in the U.K. testing paper straws to Walmart Canada's decision to start charging customers 5 cents per plastic bag used at checkout, policies against single-use plastics are becoming more and more common. So it's not surprising that the European Commission is now proposing a ban on plastic straws, cutlery, and eight other single-use plastic items.

According to a press release from the European Commission, the proposed ban, if approved in its current state, will apply to plastic cotton buds, cutlery, plates, straws, drink stirrers, and sticks for balloons, which the commission said makes up 70 percent of marine litter in the EU. In the event of approval, these products of course wouldn't be totally wiped from the map; instead, they would "have to be made exclusively from more sustainable materials instead," the press release stated. In addition, "[s]ingle-use drinks containers made with plastic will only be allowed on the market if their caps and lids remain attached."

The legislation would also lay responsibility for waste management and cleanup for plastic products at the feet of the companies that produce them. And those producers will also have to participate in "awareness-raising measures" for a laundry list of single-use products that contribute to pollution, including "food containers, packets and wrappers (such as for crisps [potato chips] and sweets), drinks containers and cups, tobacco products with filters (such as cigarette butts), wet wipes, balloons, and lightweight plastic bags," according to the press release.

If the EU approves these proposed measures, they may have a big environmental impact, but also some unintended consequences. In a recent piece for Pacific Standard, writer David M. Perry said that proposed bans like the European Commission's "do, however, have the unintended effect of making restaurants less accessible for many disabled people, while revealing the ableism embedded in far too much consumer-based environmentalism." He added that straw bans "erode [...] easy accessibility," and that there is "a kind of implicit dismissiveness behind the idea that people who rely on plastic straws for hydration might not ever have considered alternatives."

Perry added, "While some disabled people can use or even prefer harder reusable straws, metal, wood, or glass straws can be dangerous, uncomfortable, or ineffective for others. Compostable straws made of vegetable matter have a similar feel as standard plastic straws [...], but they are vastly more expensive than plastic straws and raise concerns about food allergies."

The commission also took aim at plastic bottles with a measure that would require EU members to collect 90 percent of single-use plastic bottles by 2025, "for example through deposit refund schemes."

In its press release, the European Commission said the proposed legislation would "avoid the emission of 3.4 million tonnes [sic] of CO2 equivalent" (though it's not indicated if this is an annual total or a total based on a collective of years) as well as mitigate €22 billion of environmental damages by 2030. CNN estimated that the legislation could cost businesses more than €3 billion per year, but "could also save consumers about €6.5 billion [...] per year, [and] create 30,000 jobs."

Frans Timmermans, First Vice-President of the European Commission, said in the commission's press release, "Plastic waste is undeniably a big issue and Europeans need to act together to tackle this problem, because plastic ends up in our air, our soil, our oceans, and in our food."

Environmental association Rethink Plastic Alliance told CNN the proposed legislation is "a leap forward in tackling plastic pollution" but also pointed out that "the proposals do not set targets for EU countries to reduce the use of plastic cups and food containers," which "could result in countries claiming they are taking the necessary steps as long as any reduction is achieved, regardless of how small," the alliance told CNN.

The plastics industry weighed in as well, with Plastics Europe, a manufacturer representative for plastics-producing companies, telling CNN that "it supported the 'overarching objective' of the proposal but [...] there must be more resources dedicated to 'waste management' to ensure better collection of used plastic."

To pass, the legislation will need to be approved by all EU member states and the European Parliament, CNN reported, adding that "[i]t could take three or four years for the rules to come into force."