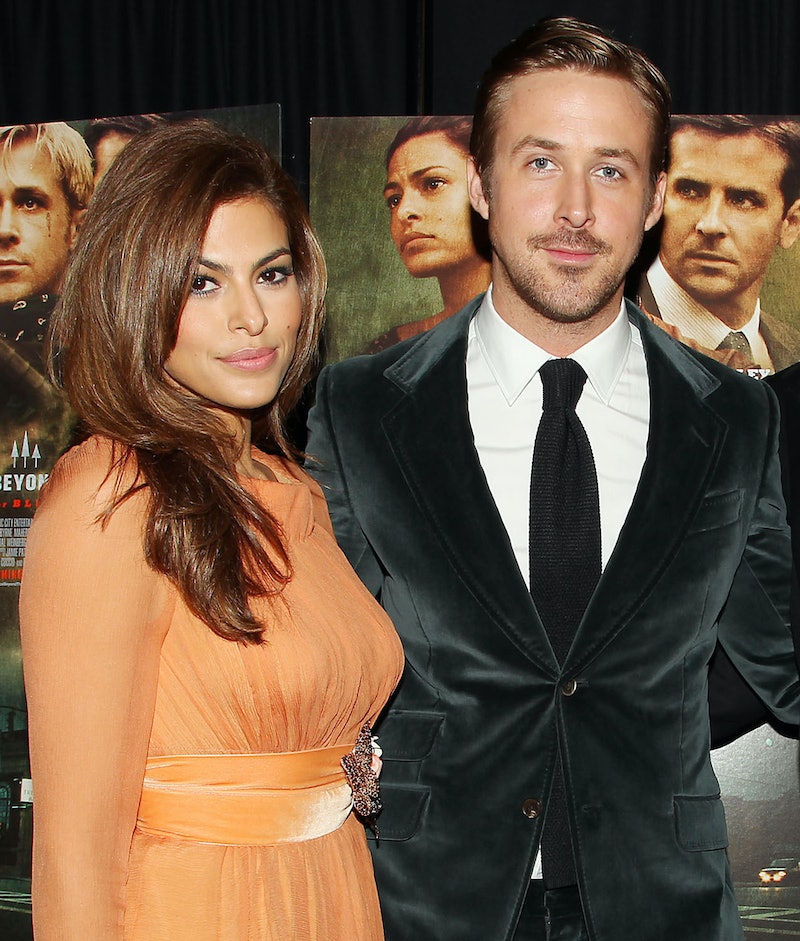 Some celebrity couples lay it all out there, and others are less revealing. Then there are the couples who are like, intensely private — the ones who hardly ever appear in public together or talk about their personal lives. Such is the case with Eva Mendes and Ryan Gosling. However, Mendes opened up about Gosling and their kids during a recent interview with Women's Health and gave fans a rare glimpse into her life as a mom.

Ever since they started dating back in 2011, both Mendes and Gosling have been notoriously private when it comes to talking about their relationship and their two children. Once in a blue moon, though, fans will get a flicker of insight into their happy family, and it seems as if a blue moon has fallen upon us today.

Mendes actually opened up a *lot* while speaking to Women's Health — particularly in regard to how and why she decided to become a mom. For a long time, being a mother "was the furthest thing from my mind," the actor told the outlet.

And then, "Ryan Gosling happened," she admitted. "I mean, falling in love with him. Then it made sense for me to have … not kids, but his kids. It was very specific to him." Ah, yeah. That checks out.

Winding up with Gosling was obviously a win, in and of itself. But it sounds like Mendes really hit the jackpot with his family, too. At one point, the couple had two daughters under the age of 2, and when asked by Women's Health how they survived, she credited "family" — both Gosling's and her own.

She explained to the outlet,

"We have an amazing support group: Ryan’s mom, my mom, Ryan’s and my sisters. It’s a village that helped us. My heart goes out to women who do this alone. I basically come from a single-parent household; although I love my dad, my mom mostly raised four of us on her own."

Of course, Mendes deserves plenty of credit herself, and Gosling has been more than happy to give it to her. While speaking to GQ in 2016, he called his longtime partner "the dream mother," and their two daughters are "dream babies." "And it's like a dream that I'm having right now," Gosling added. "I'm dreaming it all. So I feel so lucky."

Interestingly enough, in that same interview, Gosling admitted that having kids wasn't "something I really thought about, or even thought I wanted" — just like Mendes. "I didn't have a romanticized idea of it," he told the outlet. "It came about in a very surprising and kind of organic way. There was nothing kind of premeditated about it, you know. It just suddenly was: My life had changed. And thank God it did."

Despite the fact that they rarely open up about their private lives, every time they do makes it more and more clear that Mendes and Gosling are meant to be. Would fans love for them to open up even more? Probably. Sounds like keeping their family to themselves is working out pretty well for them, though.

More like this
Michelle Obama Opened Up About The "Discord And Discomfort" Of Marriage
By Stephanie Topacio Long
Jodie Turner-Smith & Joshua Jackson's Relationship Timeline Includes Her Proposing
By Jake Viswanath
J.Lo Wants To Make A Sequel To This Movie With Ben Affleck
By Jake Viswanath
Adam Driver & Joanne Tucker’s Relationship Timeline Starts With Cheese
By Jordyn Tilchen
Get Even More From Bustle — Sign Up For The Newsletter