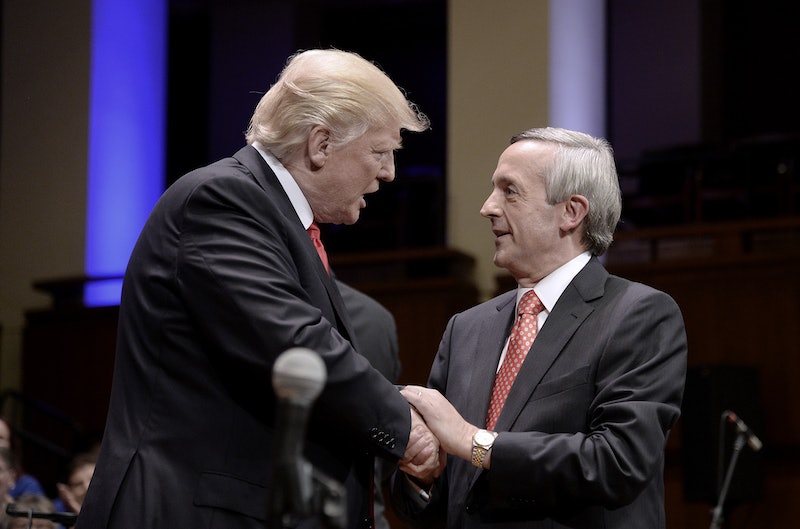 On Wednesday, adult film actress Stormy Daniels sued President Trump, accusing the president of trying to silence her over an alleged sexual relationship that they had in 2006 and 2007. The White House says that Trump denies having had an affair with Daniels — but one of the president's high profile religious supporters doesn't care either way. In an interview with Fox News, Trump adviser and evangelical pastor Robert Jeffress said that Trump's alleged affair with Daniels is "totally irrelevant."

Jeffress argued that what really matters is the policies Trump enacts as president, not his personal character or conduct. In addition, he pointed out that forgiveness is a fundamental Christian value, and as such, that evangelicals should forgive Trump for any sins he may have committed.

"Evangelicals understand the concept of sin and forgiveness," Jeffress explained. "Look, we are all sinners, we all need forgiveness. That forgiveness is available through Christ to anyone who asks."

Trump, however, has not asked — at least, not since 2015, when he said at a Christian event that he's never sought forgiveness from God.

"I am not sure I have," Trump said at the time. "I think if I do something wrong, I think, I just try and make it right. I don't bring God into that picture. I don't."

In any event, Jeffress' willingness to overlook Trump's personal adherence to Christian values is a something of a flip-flop for the influential pastor. In 2008, Jeffress condemned Christian leaders who prioritize policy over faith, saying that he's "not willing to trade people’s eternal destiny for some temporary change in the law."

“Christians need to remember that the kingdom of God is not going to come riding in on Air Force One,” Jeffress said at a debate with Jay Sekulow (who, incidentally, is now a lawyer for Trump) . “The danger in all of this discussion is that Christians sometimes are willing to sacrifice the temporal for the eternal, that in order to get their candidate elected, to enact those laws that they feel are crucial, somehow we fool ourselves into thinking we are going to bring about the kingdom of God here on earth."

But Jeffress, who also once warned that Barack Obama's support for gay marriage was "paving the way for the future reign of the Antichrist," said Friday that evangelicals should in fact be okay with any of Trump's personal transgressions as a Christian, because he's affecting the right policies.

"Evangelicals knew that they weren't voting for an alter boy when they voted for Donald Trump," Jeffress explained. "We supported him because of his policies and his strong leadership, and tonight, you saw another example — the result of that strong leadership — in the announcement from North Korea."

Daniels said in a 2011 interview with In Touch magazine that she had a sexual relationship with Trump beginning in 2006, and described the alleged affair in great detail to the magazine. Trump has denied the affair through his lawyer and the White House. It was later reported that one of Trump's lawyers paid her $130,000 in the weeks before the 2016 election in exchange for her silence. The lawyer in question, Michael Cohen, acknowledges that he made the payment, but hasn't said what it's for.

Daniels is now suing Trump, arguing that he never signed the non-disclosure agreement that Cohen presented her with and, therefore, that she should be free to speak publicly about their alleged affair. The White House hasn't commented on the lawsuit.

In his interview Friday, Jeffress said that he "will never walk away" from Trump, because "I'm his friend."