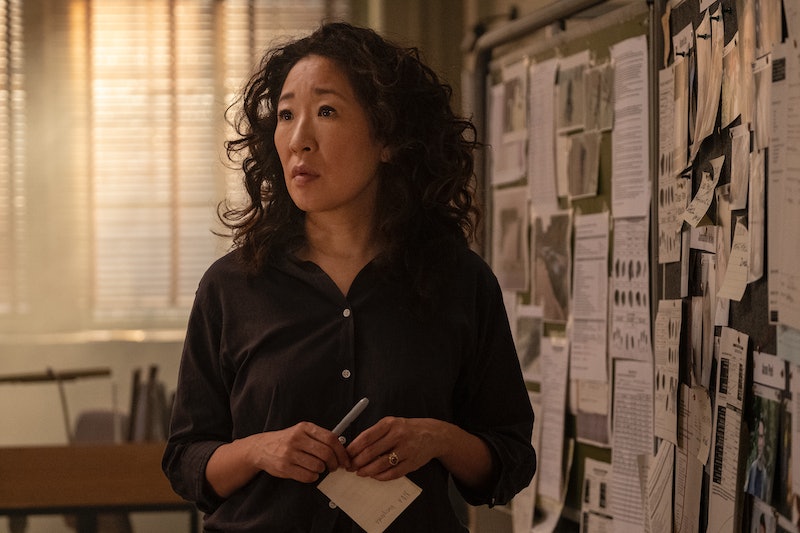 Spoilers ahead for Killing Eve Season 2, Episode 3, "Desperate Times." Villanelle has been fearing how things might change once Eve meets The Ghost on Killing Eve, and in the April 28 episode, it finally happened. The new assassin may be Villanelle's total opposite, but Eve seems addicted to the chase more than anything else, which means her attention hasn't exactly been on our Russian antihero. And it's making her lash out.

In the episode, Eve pores furiously over her Ghost research, all tacked up onto a bulletin board. "What about Villanelle?" Hugo asks. "What about her?" Eve replies, distracted. No one seems to notice her shifting attention except Carolyn, who sends Jess (Nina Sosanya) to Amsterdam to investigate a gruesome murder. Eve pipes up, "Are you thinking it could be Villanelle?" Carolyn responds, worriedly, "How are you getting on with The Ghost?" What's more, the MI6 department head intercepts the postcard Villanelle sends in this episode, which reads, "Dear Eve, I hope you haven't forgotten about me!!"

It's clear that while Eve was attracted to Villanelle for her sense of humor and narcissism, she's interested in The Ghost's thought-out and highly intelligent style of killing. When she realizes that The Ghost has murdered her latest victim by putting a chemical in his mustache cream, she marvels that the assassin wanted her victim's death to be painless. Eve concludes that The Ghost is a nurse, since she would have to know a lot about chemicals and medications, and they finally zero in on her. She is, like Eve suspected, a woman of color above 35. She's also a mom, a cleaning woman, and a nurse.

That said, her meeting with The Ghost is fairly commonplace, and they don't have the same sizzling chemistry as her and Villanelle. In fact, it's quite clear that The Ghost doesn't really care about Eve, while her competition puts on elaborate displays to impress her.

This also raises the question as to what the nature of Eve's attraction is to Villanelle, exactly. Hugo brazenly asks her as much, assuming it's sexual. And it very well might be, but it's also more than that. "What is it — do you like watching her, or do you like being watched?" Hugo asks. "Both," Eve answers readily. If that's really the case, then The Ghost likely won't satisfy the agent's desire to be the center of attention. It's likely why she almost kisses Hugo moments later, despite the fact that she's clearly repulsed by him.

In this sense, Villanelle and Eve's relationship is co-dependent. They both require attention from each other and lash out when they don't get it. As a result, Villanelle is furious that Eve never responds to her note, nearly killing someone in the women's restroom. This is the kind of dramatic infatuation that Eve craves, whether she knows it or not — and it's something that Niko never does.

Furthermore, The Ghost seems too vanilla to hold Eve's attention for long. After all, she would never don a weird, fetishized pig costume and kill her target with a crowd of people watching through the glass. But it remains to be seen whether or not Eve will come crawling back to Villanelle, or if a third assassin will pop onto the scene to divide her attention yet again.

We still don't know The Ghost's real name or how long she's been operating, but it's clear that Eve is nervous to meet her. She fidgets in a two-way mirror before decidedly putting up her hair, with Carolyn watching from the other side. As fans will recall, this is a reference to Eve's first meeting with Villanelle in Season 1, before she knew who the assassin was. This small gesture speaks volumes about her frame of mind — that she's decided to put Villanelle in the past, in favor of this new, interesting, seemingly kindhearted assassin. But Eve has a small attention span, and it's bound to break sometime soon.