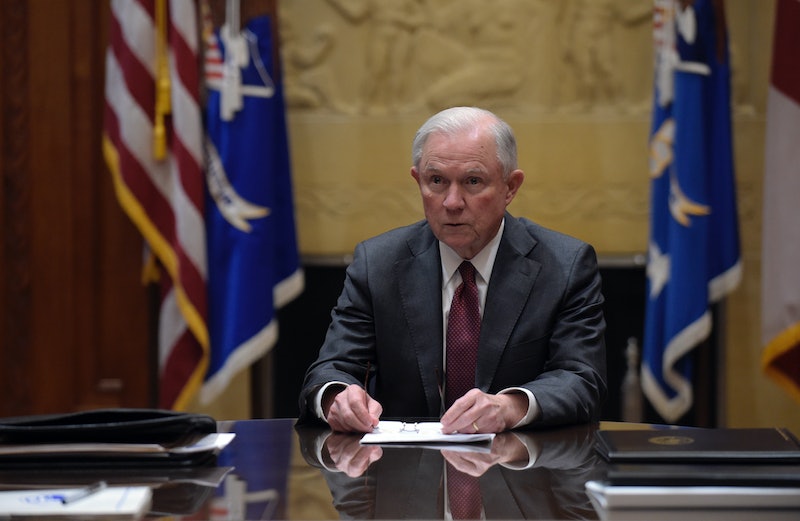 Congressional Democrats have demanded an investigation into alleged ties between Donald Trump and the Russian government, and they don't want Attorney General Jeff Sessions — a former advisor to the Trump campaign — to carry it out. Trump has repeatedly denied any connections with Russia. For a while, it was only Democrats making this request, but that changed on Saturday, when Republican Rep. Darrell Issa said Sessions should recuse himself and appoint a special prosecutor instead. So far, Issa is the only Republican in Congress to do so, but, nevertheless this a sign that the GOP may not continue to be as uniformly supportive of Trump as they've been so far.

The Washington Post reported Thursday that White House Chief of Staff Reince Priebus had asked a top FBI official to publicly dispute allegations that members of Trump's circle had been in contact with Russian intelligence agents during the campaign. Priebus had already acknowledged speaking to the FBI about the matter, and the White House later argued that this was not improper.

This was only the latest news, however, in a long stream of reporting on alleged connections between Trump, his team, and the Russian government. Earlier, Trump's National Security Advisor Michael Flynn resigned following revelations that he'd spoken to the Russian ambassador about lifting U.S. sanctions prior to Trump's inauguration.

The potential magnitude of this issue led 11 Senate Democrats to sign a letter calling for a special prosecutor to investigate possible communications between members of Trump's circle and the Russian government. Although a few Republicans agreed that some sort of investigation might be in order, none had supported a special prosecutor. Until Sunday.

“You’re right that you cannot have somebody, a friend of mine, Jeff Sessions, who was on the campaign and who was an appointee [lead the investigation],” Issa told Bill Maher. “You’re going to need to use the special prosecutor’s statute and office.”

The distinction between a special prosecutor and a congressional investigation is important. Lawmakers (and attorneys general, for that matter) are partisan officials who have to face reelection and are heavily incentivized to tow the party line, whatever it may be. A special prosecutor has far more independence from the political process, which is why they're often called on to investigate issues of potential malfeasance within the government. For Issa, who led several high-profile investigations into President Obama years ago, to call for a special prosecutor suggests that he's taking this issue a lot more seriously than some of his Republican colleagues.

“The American people are beginning to understand that Putin murders his enemies, sometimes right in front of the Kremlin," Issa continued. "He’s murdered people and taken down using cyber warfare in Georgia and Ukraine. This is a bad guy who murders people, who runs a gas station with an economy the size of Italy but is screwing up things all over the world ... we need to investigate their activities, and we need to do it because they are bad people.”

To be sure, Issa is but one Republican in a sea of many. But for a member of the GOP to call for a special investigation into its own president over alleged connections to a foreign government is ... well, it's something. At the very least, it suggests that this issue isn't going away anytime soon.