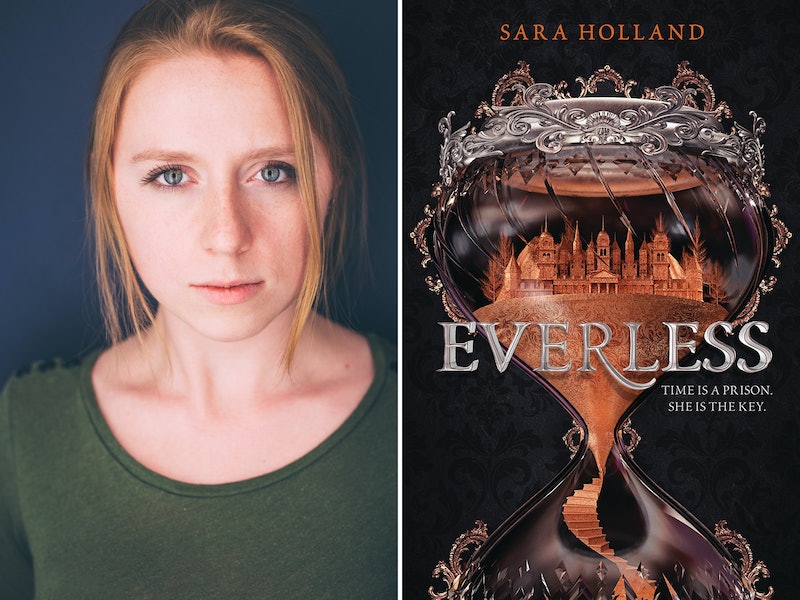 You've probably heard the phrase "time is money" more often than you can count. But chances are equally as high that you've not really thought about what the idiom means in our daily lives. But author Sara Holland clearly has, if her YA fantasy debut Everless is any indication. The book is set in Sempera, a world in which blood-irons — alchemical coins that extend people's lives by anything from hours to years when consumed — are the currency, and people will do anything to get it.

"In a way, it’s not all that fantastical a concept—because time does correspond to money in very real ways. At least in the US, we tend to view time as a resource to be spent or conserved," Sara Holland tells Bustle. "Lots of people have an hourly wage, which gives rise to the idea that an hour of your life is worth 12 dollars or whatever. And then on a macro level, there’s the fact that wealthy people tend to live longer — hello, inequality in healthcare. The structure of society in Sempera is not all that different from our own —historically, and today, it feels like we’re grappling with a lot of the same problems."

The structure of society in Sempera is not all that different from our own—historically, and today, it feels like we’re grappling with a lot of the same problems."

But the world of Everless matches the real world in other ways, too. In Sempera, members of the rich aristocracy — like the Gerlings family — tax the poor to the hilt, extending their own lives by centuries. And no one resents the Gerlings more than the book's heroine, Jules Ember. A decade ago, she and her father were servants at Everless, the Gerlings’ palatial estate, until a fateful accident forced them to flee in the dead of night.

When Jules discovers that her father is dying, she knows that she must return to Everless to earn more time for him before she loses him forever. But going back brings more danger—and temptation—than Jules could have ever imagined. Soon she’s caught in a tangle of violent secrets woven by a dangerous Queen, and finds her heart torn between two people she thought she’d never see again. Her decisions have the power to change her fate—and the fate of time itself.

But even as Jules is only beginning to struggle with the secrets and unknowns of Sempera and her new surroundings at Everless, she is also grappling with other issues scarily familiar to our own, one of which is all too relevant this year: misogyny and sexual harassment. From the very beginning of the novel we see that Everless is run with a firm misogynistic hand: Each female servant in the estate is chosen based on their perceived attractiveness, and the guards run the staff with fear and intimidation. Considering the #MeToo movement, Holland's male-dominated world is almost scarily current.

"I love reading about matriarchal worlds that don’t struggle with sexism in the way that we do. And I would love to write a story set in that kind of world, someday. But it didn’t seem realistic for Everless because the Queen of Sempera doesn’t make the well-being of her citizens a priority, especially the poor and the marginalized," Holland says. "She is pretty checked out of the day-to-day governance of the country, leaving that up to the heads of the wealthy families who control the actual land. So the worst impulses of the men who run the Everless estate are pretty much unchecked."

I love reading about matriarchal worlds that don’t struggle with sexism in the way that we do. And I would love to write a story set in that kind of world, someday. But it didn’t seem realistic for Everless."

"[But] once Jules gets to Everless, she’s sheltered from the worst of it by the company of other women," Holland adds. "Some might see this as a cop-out on my part, to shield my protagonist like that. But I found as I was writing that I just wasn’t interested in exploring pervasive sexism in Sempera, even if it existed there. I was drafting during the 2016 presidential election, where we also saw grotesque misogyny on display. And feeling barraged with it in real life, I didn’t want to dwell on it in my writing. Instead, I put in other women as counterpoints to the Queen — though they have less power and privilege, they use what they do have to protect others."

And it is this public versus private persona, privileged but protective, powerful yet powerless, that comes up throughout Everless, from every major character. There is this sense that we don't know everything about anyone, from Jules to Lords Roan and Liam, to the Queen and her heir Ina Gold. Everyone has secrets — parts of them that are split between who they really are and how they want to be perceived. It's another way that Holland's debut has been set apart from some of the most popular recent fantasies, which so often feel more like an escape from our world than a commentary on it.

"There are a couple of reasons I wanted that to be a part of the story: though I do love epic fantasy’s sweeping politics and large-scale political machinations, at the end of the day I’m more interested in interpersonal and intrapersonal conflict — and if the fate of the world hinges on those conflicts, so much the better," Holland says. "But if there’s to be any suspense in that kind of story, where the primary struggle takes place within the protagonist’s mind, there has to be some uncertainty what the outcome will be—which way will the character go, what choices will she make?"

"Though I do love epic fantasy’s sweeping politics and large-scale political machinations, at the end of the day I’m more interested in interpersonal and intrapersonal conflict—and if the fate of the world hinges on those conflicts, so much the better."

Everless tackles so many of the problems we're all facing in our own world, but with the sort of entertaining, all-encompassing, magical themes you can't help but lose yourself in. It's this great combination of authentic characters and a relatable world that will have you desperate to continue Jules's adventures after the final page is turned.

"People are shaped by their worlds before they can themselves shape the world," Holland says. "The initial idea for Everless arrived in the form of an image, of a girl kneeling by the side of a lake in winter, hurling a coin into the water. All I knew was that she was grieving, and angry. The connection between money and death and anger gave me the foundation for both the world and for Jules’ character."