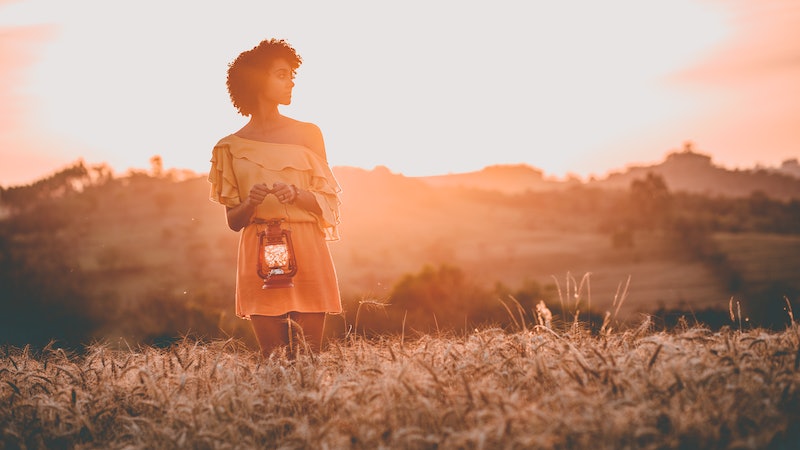 One story from one woman from every country in the world. It sounds like an impossible task, but that's not stopping the creators of Every Girl, a book that aims to promote empathy in children by exposing them to stories beyond their experience. The book, which is being crowdfunded on Kickstarter right now, will feature the true stories of women from all around the world, all collected through interviews. Read on for more information on how you can make the Every Girl book a reality.

The book was created by Sojourn Wallace, Claire Read, Sophie Beya and Alethea Pascoe, all of whom met while aiding in the refugee crisis in Lebanon. Wallace was inspired to create this project after a story about her work in Lebanon went viral and she began to receive hate mail.

"That was kind of the beginning of everything that made me feel like the refugee crisis wasn't just about what was happening in Syria," Wallace tells Bustle. "It was also a global phenomenon, a way of group-think, and people just deciding that they don't understand or they don't know, so they just hate."

However, the idea for Every Girl really came to fruition after Wallace's 30th birthday. As part of the celebration, her husband produced a video in which 30 of her closest friends wished her a happy birthday. A viewer remarked that she was amazed by the fact that Wallace had friends from so many different countries. "She said, 'Well, if more people had more friends from other countries maybe the world wouldn't be in the in shape that it was in.' That kind of resonated with me," Wallace says. "Maybe the biggest issue isn't that people just innately don't like 'the other,' but that they just don't have access or knowledge of the other."

So Wallace and her team launched the project, and set out to find women, interview them, and write their stories. In addition to the profiles on these women, the book will feature illustrations of each interviewee as a child, as well as maps of their country, their national flag, and a fact sheet about the world then and now.

During the interviews, the Every Girl team ask about themes that they believe define girlhood, no matter the country, such as mother-daughter relationships, sexuality, culture and how it relates to your gender, body image, economics, talents, ambitions, friendships, and insecurities. Wallace likes to begin with a simple question: "Tell me about the moment where you felt like your mother or your father were no longer the mystical creatures who could do anything and everything, but became human to you as a child." From there, the stories can go in many different directions.

One of Wallace's favorite stories was told to her by a half-Dutch, half-Greek woman who spent her entire childhood on a small Greek island. When she was 12 years old, her father was diagnosed with terminal brain cancer, and her family had to move to the Netherlands to get him the care he needed. "She talks a lot about how when you are half-Dutch, or when you're half anything, you become this like third-culture kid where you see the world through a lens that's not directly one or the other," Wallace says. "But the beautiful part about this story is more-so about her father, and how his disease kind of changed him into a child, and how all of the people who were dealing with him deteriorating, how it affected everybody differently."

The girl told Wallace that one night she and her sister convinced her father that they were Lady Gaga and staged a concert for him. "So he's like bright-eyed, he's sitting on the couch, waiting for the music to start, and [they] bust out into the living room and [they're] dancing, and at the end of it, he's so happy! He's standing up, clapping, and the mom comes: 'What are you guys doing? You can't trick your father like that. That is unacceptable.' After the father passed away, the mother really came to understand that was a happy moment for him and for the sisters, because they were able to make him happy. But for the mother, it was like watching her best friend turn into a child."

Wallace believes that sharing stories like this will build a more positive global community. "I hope to help foster a generation of kids who celebrate diversity and are not afraid of the other or people based on how they look," she says. "I feel like when you don't fear the other and you celebrate diversity, your life is rich."

She adds: "There's a saying... that when you read a book when you're a child, it becomes a part of your identity. I hope that can be true for this."

So, how can you get involved with Every Girl? If you or someone you know has a story to tell, you can fill out a form on their website to be considered for an interview. You can also volunteer to help Every Girl with their efforts to connect with women from around the globe.

And, of course, you can back them on Kickstarter. The team is offering plenty of rewards in exchange for donations, including handwritten postcards from the women they feature and a cookbook filled with recipes from cultures around the world. One of the most exciting rewards is the opportunity to meet the women featured in the book. "I feel like it is a real full circle," Wallace says. "You know how sometimes you watch a show or you read a book and then the person in the book or the show become kind of untouchable in a way? For me, that part of the book is really cool because we stay connected, and we are a real community."

More like this
Prince Harry Incorrectly Recites Christina Aguilera’s “Genie In A Bottle” Lyrics
By Jake Viswanath
Allegra Goodman Procrastinates By Reading Time-Management Books
By Samantha Leach
'That '90s Show' Star Callie Haverda Got Advice From Mila Kunis & Ashton Kutcher
By Brad Witter
I Read Prince Harry's 'Spare' So You Don’t Have To: 11 Highlights To Know
By Marina Watts
Get Even More From Bustle — Sign Up For The Newsletter
From hair trends to relationship advice, our daily newsletter has everything you need to sound like a person who’s on TikTok, even if you aren’t.