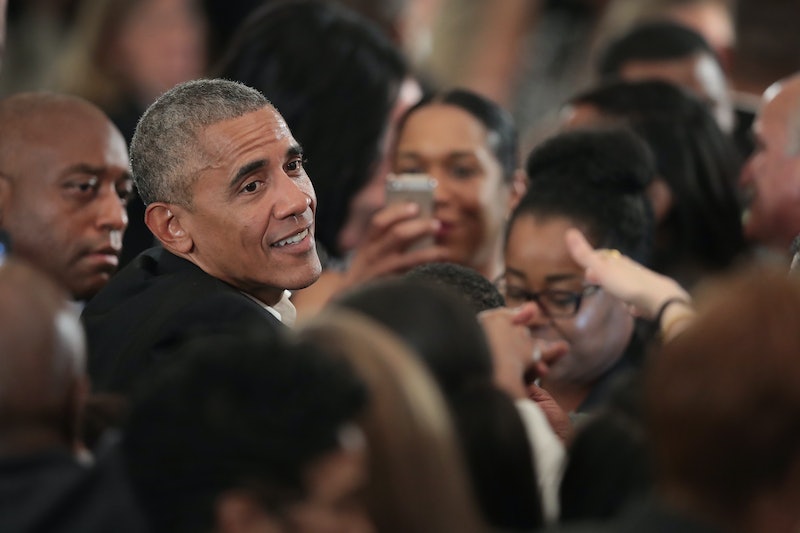 Here is some news that might bring a modicum of joy to the ever chaotic and perennially tense political landscape of America. Ever since January, former president Barack Obama's sense of style has seen a shift in tone. During his presidency, Obama was known for his sharp and tailored suits in neutral or dark shades. Nothing was ever out of line and everything was on the proverbial point. But recently, Obama's shirts are unbuttoned, and people are loving it. With each appearance in public, the buttons are little more relaxed and naturally, the internet's reactions — in inverse proportion — are getting crazier. The more casual Obama gets, the wilder the internet becomes.

The most recent reactions arrived after Tuesday when Obama attended the Global Food Innovation Summit in Milan, Italy. Although Obama was preoccupied with explaining his thoughts on the Paris climate agreement, the internet focused its attention on Obama's neckline. It wasn't just everyday netizens who found the former American president's unbuttoned shirt comment-worthy. CNN's political reporter Hunter Schwarz, too, shared his two cents on Obama's neckline by describing it as "three-buttons deep."

People have been keeping a track of Obama's gradual unbuttoning. Ever since Donald Trump took the office, Obama's style has undergone a casual transformation. During his time in the White House, Obama's attire has a specific element of practicality and, of course, elegance. Now it seems it's all about leather jackets, unbuttoned shirts, and a carefree air.

Allan Smith of Business Insider joked that each button represents the month Obama has been out of the office.

Others noticed that Obama appeared more relaxed and "glowing" compared to the time he was the president of the country.

My favorite reaction was a joke about how each button represents how close America was to a constitutional crisis. From former acting Attorney General Sally Yates' testifying before a Senate subcommittee to FBI director James Comey's sudden dismissal, the past few days have been intense, to say the least.

Of course, there were some who did not particularly enjoy the sight of a casual Obama. But the majority of reactions have been of people giving the former president a thumbs up for his new easy-breezy style. The message is clear: People miss Obama.