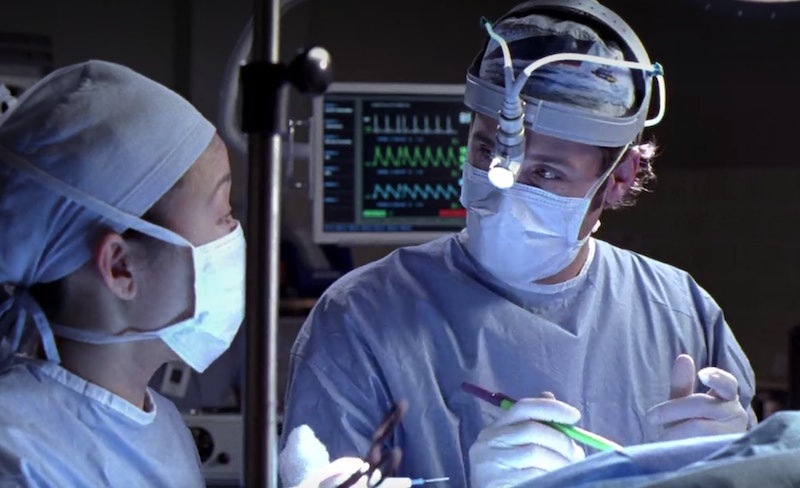 The Fray has been making you cry during your favorite dramatic TV show and movie scenes for over a decade, because their wistful melodies make for perfect soundtrack fodder. In 2005, the band released their debut album How To Save A Life, and the track of the same name found its way onto a 2006 Grey's Anatomy episode. Soon, ABC used the song to market Grey's Anatomy during commercials, and it became a must-listen hit, according to Hypable. But that's not the only show the song's been featured in. If you count up every time The Fray's "How To Save A Life" was used on TV, it adds up to eight episodes over six different shows.

Now that The Fray's second and self-titled album is hitting its 10-year anniversary on Feb. 3, it seems like an appropriate time to look back at one of the band's biggest songs — and all the ways TV adapted it for their melodramatic needs. Sure, it's not the only song of theirs to become a TV mainstay. Other hit Fray songs like "You Found Me," "Over My Head," and "Look After You" have also been television staples. But since TV really helped "How To Save A Life" propel the band to success, it's only fair to look at that song's impact specifically. Here are all the shows the tune has graced.

The song plays on the radio during a flashback of Nick suffering through law school before changing his life and working at the bar — instead of taking the bar.

The song plays during the final moments of the episode where all the bad guys go to jail and the the bereaved family of a missing teenager gets closure.

The tune plays over a montage of scenes like Nathan and Haley returning to their apartment, Dan thinking about what he's done to Keith, and the coach cleaning up the school after the students throw a party.

At the close of a tough court case, the lawyers get a drink and sort through the events of the day while the song plays.

The song plays as a series of organ transplant patients die despite all the doctors' hard work.

JD runs a montage of hospital hijinks in his head and says, "There's certainly been a lot of odd moments around here. And for some reason, whenever I think about them, The Fray is always playing." But after the song plays for a second, he clarifies he meant "She Is" by The Fray, not "How To Save A Life."

This song rightfully plays during a montage of surgery scenes on the show. It's basically the theme song for Derek Shepherd's catchphrase, "It's a beautiful afternoon to save lives, people. Let's have some fun."

During the musical episode, Grey's of course couldn't ignore the song it put on the map — especially when it fits so well into a doctor show. When Cristina is nervous to operate on Callie post-car crash, Owen starts singing the song to her to keep her calm. The rest of the cast joins in, and they do save her life.