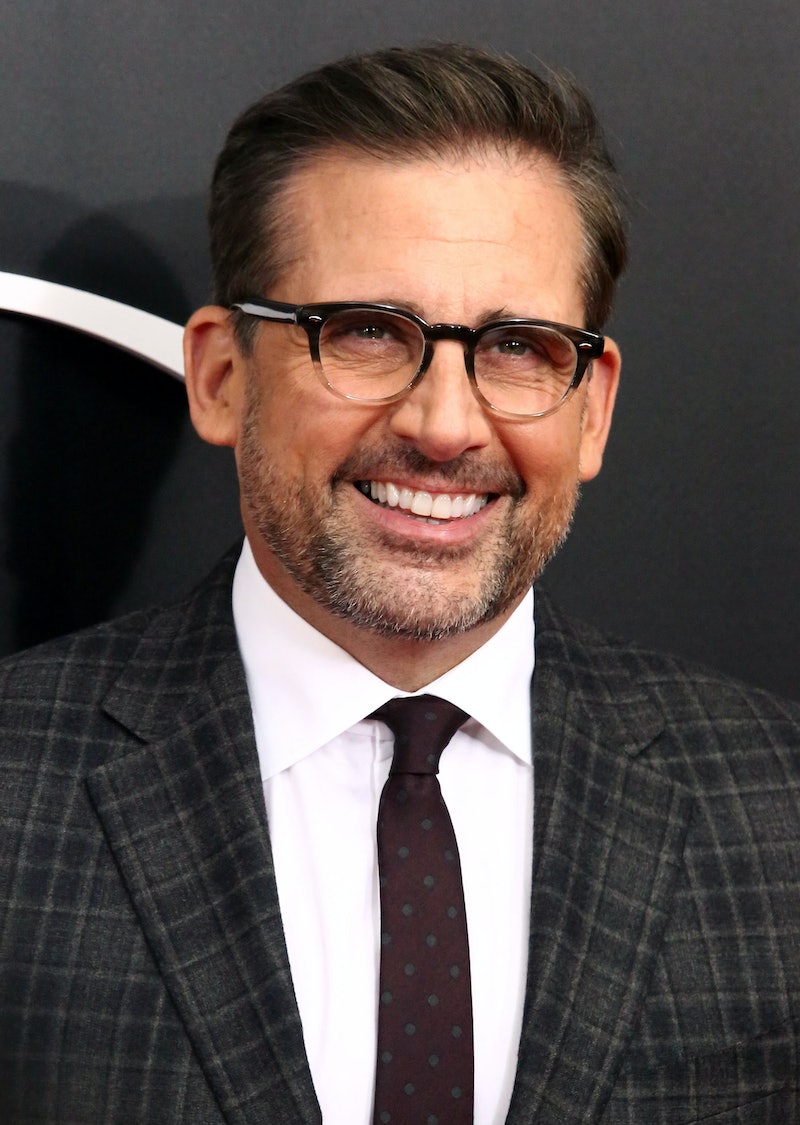 If you're only now jumping on the "Steve Carell is hot" train, then you've been missing out for years. According to the internet, Steve Carell is now super hot thanks to his full head of gray hair and his fashionable choice of clothing. Yes, he is now considered a silver fox. But, newsflash: Carell has always been hot, and for those who are only now just recognizing it, well, that's just plain insulting — and also, too bad for you, because you could've been enjoying his beauty for way longer than the past few days.

Last Wednesday, the 54-year-old was spotted in London promoting Despicable Me 3. In the photographs (below), the comedian can be seen wearing sexy shades, a fitted sweater with a collared shirt underneath, and, of course, some unforgettable silver locks. Basically, he was photographed walking around like the insanely attractive model he's been since, well, forever.

Thanks to these photos, many have taken to social media to express their newfound obsession with Carell — and his gorgeousness. As one Twitter user wrote, "Honestly take your Goslings and your Zayns Malik and give me 2017 Steve Carell." Another person tweeted, "Hot Steve Carell is your ex boyfriend who is honestly just doing better without you."

While chatting with Entertainment Tonight Saturday at the Despicable Me 3 premiere in Los Angeles, Carell responded to the reactions to his "new" hot look. In typical Carell fashion, he joked, "I am so sick of people just looking at me for my physical attributes. It's just genetic. There's nothing I can do." He then added, "I'm bursting with pride. That's very nice."

Yes, the above statements are true, but it's kind of unfortunate that people are now only becoming acquainted with "Hot Steve Carell." Hello, he's been attractive for all this time now. As you can see below, there are others who 100 percent agree with me.

See? This isn't really news to those of us who have been already swooning over Carell. If you need proof of his undying hotness, here you go.

When He Sported A Beard

Helllloooo, Steve. And, his beard is partly silver, which just goes to show you that gray isn't something new for him — and his hair.

When He Stole The Spotlight

Ryan Gosling and Brad Pitt, who?

When He Stole Ryan's Limelight — Again

Yes, Gosling is super ripped in Crazy, Stupid, Love., but Carell has it going on even more so. He is the definition of a DILF in the movie.

When He Almost Cried Because Of His Wife

As he told KABC at the 2015 Academy Awards after his wife, Nancy Carell, praised his work in Foxcatcher, "Honestly, that means everything to me. I'm going to start crying before I even get inside." Seriously?

The love he has for Nancy is beyond swoon-worthy.

When He Rocked It As Michael Scott

Who can wear a turtleneck so well? Steve Carell, that's who.

When He Starred In Little Miss Sunshine

It's almost too much to handle.

When He Originally Went Gray

It's time for those who haven't always found Carell hot to start reassessing, because he has (and will forever be) "Hot Steve Carell."