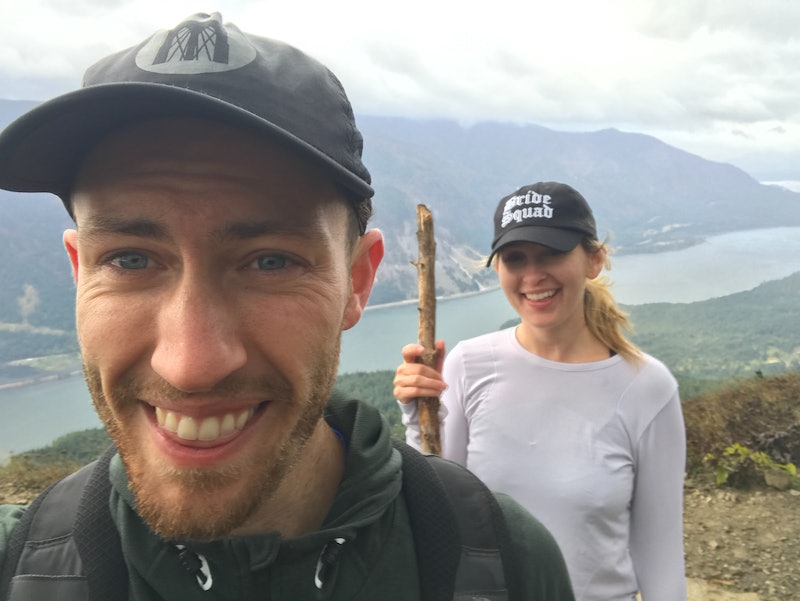 Last July, I dumped every single thing I owned on the floor of my apartment. These were the belongings that had made up my life since college — 30 pairs of shoes, 12 bras, 20 handbags, 13 stuffed animals, seven picture frames, 34 DVDs, three old iPhones — and they all had to go. I was about to give up the keys to my New York City apartment and hit the road indefinitely, staying (and working remotely) in a new spot each month with my boyfriend, as we began our lives as digital nomads. And that meant turning an apartment’s worth of stuff into a life that could fit into two suitcases.

Before my own digital nomad adventure started, I always wondered what people who ditched their things and drove around the country in a van, or bought a one-way ticket to a distant country and parked themselves there for a while, were thinking. The closest I had ever come to doing that was heading to Europe, post-graduation, with a friend from my sorority. Our trip lasted three weeks and we did laundry eight times. The nomad life looked nice in photos, but I questioned if it was something I could deal with in real life; I was more of a homebody and a planner than a ”pack up and go” kind of person.

But early last year, I was in a funk about turning 30. In New York City, things were feeling stagnate and inelastic. I walked the same blocks, over and over again, hardly venturing past my subway stop on the 6 train. Fights with my boyfriend seemed to be about the same thing, again and again — fear of moving in together and dealing with the chaos of both running our own businesses, in a city that isn’t kind to those who take a moment to rest. I had been living in the same spot for years, and felt like I needed a new adventure to enter my new decade.

But the biggest motivator was that my boyfriend and I decided to move in together. Six months into our relationship, we began chatting about how when our leases were up on the very same date, we would get a place together. But the idea of moving in with my significant other was something I had never even come close to doing before, and it terrified me. What would happen if I ditched my own home and moved in with my guy, and it didn’t work out between us? Then I’d have to start from square one and find a new apartment for myself. Or, what if we moved in together and it did work, and then we got engaged, planned a wedding, and I had a baby growing in my belly before next spring? That all sounds like a good long-term game plan, but speeding along to that kind of life change sounded like too much for me to handle in the throes of my turning-30 crises.

People say the best way to test a relationship is by going to Ikea together, moving in together, or traveling together. About a year into our relationship, my boyfriend and I decided we could do two of those three things if we became digital nomads, finding out if we were made to last and having an adventure together in the process. We’d spent a long time casually talking about how one day, we should ditch everything and just live on-the-go — so now, we decided, if we were going to figure out the rest of our lives together, we might as well team up on this nomadic adventure and see if we could make it through this first.

Perhaps their pushback is what made this decision easy. I thought to myself, why follow anyone else’s version of how I should live my life?

Other than the personality stuff, the idea of becoming a digital nomad didn't require making as huge a life change for me as it would for other people — I spent the last two years building my own business so that I could work from home, something I always wanted to do (because I liked the flexibility it offered, not just because the idea of mid-day naps seemed very appealing). My boyfriend had also spent the previous year building a business that allowed him to work from home. I realized that having our own businesses meant that our home could be anywhere — a bungalow on the beach in Southern California or a ship in the middle of the Atlantic (as long as there was Wi-Fi).

The nomad conversation evolved over the year. We first started chatting about the idea of buying a car, loading our stuff in the backseat and traveling around the country, stopping in a new city every few days. But then we realized that the idea of a nomadic road trip doesn't lend itself to keeping up with our work schedules and to-do lists. Plus, as a New Yorker, driving wasn’t my specialty and something I wasn’t eager to add to our new journey on the road together. Finally, about two months before it was time for our leases to expire. we decided that instead of traveling every week, we’d pick one place, one city, and be there for 30 days at a time. We decided that a 30-day timeframe would allow us to really immerse ourselves in that city, without feeling pressure to ditch our day-to-day work to cram in exploring.

We were excited about our decision, but a lot of people in our lives thought we were crazy. Most people see becoming a nomad as a 20-something adventure. Everyone says your twenties are the time for you to move and shake up your life, without all the consequences that come with having responsibilities (like bills to pay and the pressure of having your “stuff” together before you turn the big 3-0). A lot of people in both our lives argued that we were unwisely delaying a future of marriage, kids, and a mortgage by living like this. Others said that it might be too much stress to put on a relationship that wasn’t older than just a few years.

Perhaps their pushback is part of what inspired our decision. I thought to myself, why follow anyone else’s version of how I should live my life? I didn’t do that when I decided to start my out of the box business, Bridesmaid for Hire, and I certainly wasn’t going to start listening to them now. Why not instead do something that scares them, and me, at the same time?

On August 1st 2017, the day our leases expired, we’d already gotten rid of 90 percent of our belongings. We packed only the necessities, stuffed some other things (like photographs and keepsake items I wasn’t ready to ditch) into garbage bags that left at my boyfriend’s parents house, and hit the road, living in a new place every single month. We found places to live by looking on AirBnB, Facebook, and asking friends if we could house sit for them when they went on extended vacations.

On the very first day of our nomad life, when we settled into our first 30-day-home on a quiet street in Portland, Oregon, the severity of this decision and the complications of this lifestyle suddenly hit. This was more than the nerves I had before leaving for the trip. I stared down the facts: instead of settling down somewhere and building roots for the future, like most of my friends who were pregnant or who already had a couple of kids, my boyfriend and I were unpacking our suitcases and twisting picture frames to face the wall so that we didn’t have to spend a month staring at the faces of the people who usually call this house home. We wondered if all of this would one day make sense to us, or if we had just made a big mistake.

Every city has changed me a tiny bit, and changed my relationship with my partner a whole lot.

About a week into the journey, we realized we were doing what we should be doing. It all just felt right, in perhaps the same way as a person would say signing a lease for a year in an apartment complex would feel. We truly felt like we belonged to be exactly where we were.

The hardest part of this lifestyle is not knowing too much about where you’re going to live until it’s time to move in for the month. You open the door and smell the smells, touch the starchy sheets, see a cockroach in the shower or ants in the kitchen, and just have to find some way to look at all of that and breathe. But on the flip side, you’re entering someone else’s personal space for the month, and there’s something special about thumbing through their bookshelf, looking at the sweaters hanging in their closet, and using their choice of laundry detergent, that makes it feel exciting. It really feels like you’re living in someone else’s shoes.

Almost a year later, we’ve called cities like Portland, Austin, Venice, and Brooklyn our home. Every city has changed me a tiny bit, and changed my relationship with my partner a whole lot.

In Portland, I tried to go vegan and climbed mountains for hours longer than I imagined my legs could handle. My boyfriend and I talked about how we hope we’ll be as parents, together, one day, in the future. I didn’t fidget around the conversation like I used to.

In Austin I danced to live music and took care of two loving pit bulls that came with the apartment we were house sitting for a friend. My boyfriend and I figured out that disagreements can be conversations, and you must listen instead of being the first to rush and speak.

I look around and feel jitters in my heart, wondering where we’ll go next, and thinking about the friends I’ve made, and the stories I have to tell, and best of all, the kind of person I’ve become.

In Venice, California, I learned to surf and made an instant best friend in a workout class, the kind who made me feel like I’ve known her forever. My boyfriend and I took to the kitchen and cooked together for the first time.

There are some moments, like when we’re in between places to live, sitting at an airport or napping inside a rental car with our overflowing suitcases stuffed in the trunk and backseat, when I think to myself...it would be mighty fine to go back home now. To a place where my name is associated with the mailing address, where I can unpack my underwear from a mesh pouch inside a suitcase and snuggle up in sheets that smell like me.

But then I look around and feel jitters in my heart wondering where we’ll go next, thinking about the friends I’ve made, and the stories I have to tell, and best of all, the kind of person I’ve become. I've become the kind of person who no longer worries about packing her own kitchen utensils, no longer lets the sight of a dead cockroach (or five) in the shower get her all stirred up. I’ve become a person who can live out of a suitcase, wear the same thing almost every day, and love every single minute of living some place new every month, without missing any of the things that crowded a tiny space I once called my home. I feel free of so many things, and more ready than ever to embrace what comes next.