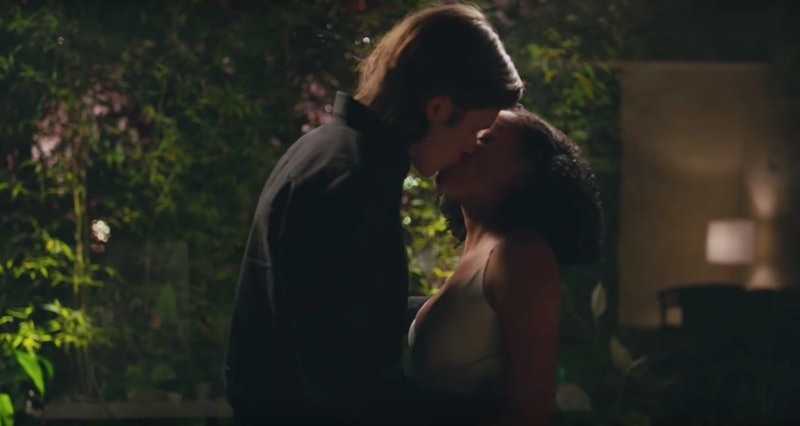 On the surface Everything, Everything may feel like a tearjerker the YA audience is familiar with: girl meets boy, girl (or boy) has life-threatening illness, they fall in love, there's inevitable tragedy. Comparable to The Fault in Our Stars or A Walk to Remember, Everything, Everything (based on the 2015 book of the same name) tells the story of a young girl (Amandla Stenberg) who falls in love with her neighbor (Nick Robinson), but can't leave her home without the overbearing threat of possibly dying. What makes the film different is that Maddy (Stenberg) is black and Olly (Robinson) is white. But what really separates the film from the pack is that the interracial aspect of the relationship is never addressed in the movie, not even once.

It may sound contradictory, but the fact that there isn't a point to be made about the colors of their skin actually makes a point in itself. Author Nicola Yoon says it's an intentional move, especially for the young teens watching this movie, to see when it premieres May 19. "My relationship is interracial, and it's not anything to talk about," she tells me on the carpet of the LA premiere. Yoon, who's Jamaican-American, has her husband David Yoon, who's Korean-American, by her side. "We're just people living our lives. When I wake up in the morning, I'm thinking about blueberry pancakes, I'm not thinking about, 'Oh, we're so different,'" Yoon says. "The fact is, I have more in common with my husband than anyone in my whole life." Hence, the inspiration behind Everything, Everything.

Up-and-coming stars Stenberg and Robinson both tell me that the lack of discussion about the interracial relationship is what drew them to the project to begin with. "That's the reason I did this movie," Stenberg tells me. "I saw the script and thought it was going to go to a white actress, it kind of skipped in my head... It's so important that we have this character, intentionally made for people of color."

The fact that a big studio was behind a story that's often untold was a huge draw for both actors. "When I heard this was the first interracial film made by a major studio in this genre, it kind of blew my mind a little bit," Robinson says.

Stenberg agrees. "The idea that I could be a part of this film that is being widely distributed as a piece of pop content but as a black role... was really powerful to me," she says. "We see these films, but I feel like we haven't seen something like this before. We haven't seen it in this way and I think that's really special."

Robinson reiterates his co-star's feelings. "The fact that it's not explicit in the film and is not even highlighted, I think, is a powerful message in itself," Robinson tells me.

Ana de la Reguera, who plays Maddy's aid Carla, admires that aspect of the film, too. "Because it's not an issue or thing, I think that's really cool. There's not even one word about it in the movie," she says. The actor further explains why it's an important message for young viewers to take home — apart from the romance.

"That's so important as a message [that] anyone can be the leading girl in a movie. An Indian girl, a Mexican girl, someone with a disability, anything," Reguera says.

Stenberg tells me that driving this point home is her mission. "It was a talking point between me and the director, we're both black women," the 18-year-old says. "The fact that we found ourselves in that environment to make this piece of content for a studio, we were really self-aware of how important it would be to push this mountain of diversity in Hollywood forward."

And as far as that larger-than-life love depicted in the film, Stenberg says she's experienced that and currently is now. "Honestly, the biggest thing about love when it's real is that it forces you to think selflessly and think outside of yourself. I have it currently, my boyfriend's here with me," she says.

I don't know what her boyfriend's race is, and I certainly don't feel the need to ask, because at the end of the day, love is love.

More like this
'Derry Girls' Creator Teases Exciting Spin-Off Starring These Three Characters
By Olivia-Anne Cleary
At 28, Minnie Driver’s Personal Life Was “Falling Apart”
By Kate Dwyer
Becky G Once Had A Fear Of Speaking Spanish. Now She's Topping The Latin Charts.
By Tess Garcia
Playing A Scrub Nurse On 'Grey’s Anatomy' Made BokHee An Instagram Royalty
By Brad Witter
Get Even More From Bustle — Sign Up For The Newsletter