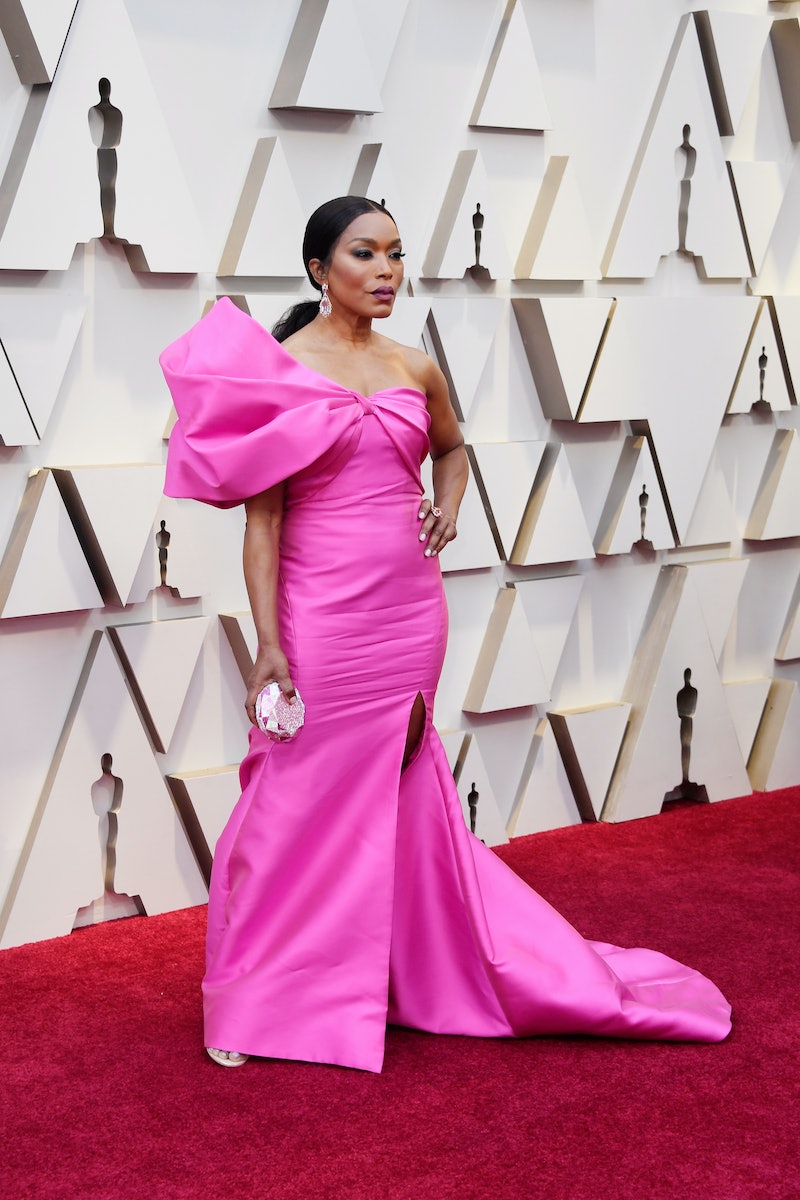 Queen Mother of Wakanda Angela Bassett said it best: "Show them who you are." The simple but powerful phrase describes exactly how the cast of Black Panther's Oscars red carpet outfits shook the pre-show. Individually and collectively, the cast is a vision of Black excellence — not to mention the group's look is a great visual for Black History Month.

Unless you've been ignoring social media for months, then you know the Marvel film and its actors have accomplished a lot since the film's trailer was even released. The film blew up box offices globally, earning over $1.2 billion and becoming the highest grossing superhero film of all time. It's also the first superhero movie to feature a predominantly Black cast.

At the Oscars,the film is nominated for Best Picture, and it's a milestone for the Academy as the first-ever Marvel film to be nominated. Not only has the film broken barriers to show more representation for people of color, but it's also a movie that revealed blatant differences in Black and African cultures.

The entire cast appeared on the red carpet to serve looks to compliment a potential win, and it's safe to say they're all stunting like winners regardless of if they achieve the Best Picture award by the end of the night. Peep all the looks for yourself.

One thing fashion lovers can appreciate about Boseman is that his red carpet looks are more than the average black tux. The actor sported a black-and-blue sequin blazer with black pants along with a black turtleneck with a floor-length tie detail. The actor also tied the look together with a matching pair of black dress shoes. It's tuxedo on a whole other level.

Bassett didn't come to play any games at this year's Oscars. Delivering viewers glam vibes, she came decked out in head-to-toe pink. The actor wore a fitted mermaid style gown with a slit in the front and a long train in the back. The top of the gown featured a wrap detail at the bust that flared off into a giant one shoulder bow. Bassett also carried the pink theme throughout her accessories. She matched the gown with a sparkly pink clutch and a pair of pearlescent open-toed heels. The actor stood with her hair in a middle-parted low ponytail style, letting everyone bathe in her queen mother status.

Gurira can kick butt with her wig on or off, and her Oscars look is just as badass as that scene in Black Panther. The actress donned a black and gold Brock Collection gown with a highly textured fabric. She complemented the look with a gold Leighton Jewels headband, a pair of gold dangling earrings, and wore her hair in braids. The whole outfit is so fierce and she looks ready to rule a nation of her own.

Letitia Wright came to the red carpet dressed in a beautiful peach and white textured gown. The actor wore a long leafy print dress with different hues of light brown, gold, and white in the details of the gown. Wright wore her natural hair slicked back and rocked to a matching pair of peachy floral earrings.

Although Jordan plays the antagonist in Black Panther, fans couldn't help but to fawn over his velvet suit. The actor has become more daring in red carpet looks since debuting a harness at the Golden Globes, and tonight's look was worth the risk. He dressed in an all blue velvet suit with a black bowtie and diamond earrings. It's super suave to say the least.

Winston Duke operated on the red carpet dressed as a classic gentleman. The actor wore a black blazer with the details of the lining, pockets, cuffs, and lapels outlined in white. His footwear was relatively similar to that of his Black Panther costar Michael B. Jordan's as both men sported a pair of shiny black dress shoes.

Many Black Panther fans are rooting for the film to take home the award for Best Picture, but regardless of what the Oscars envelope says, the cast's outfits are already wins in their own right.