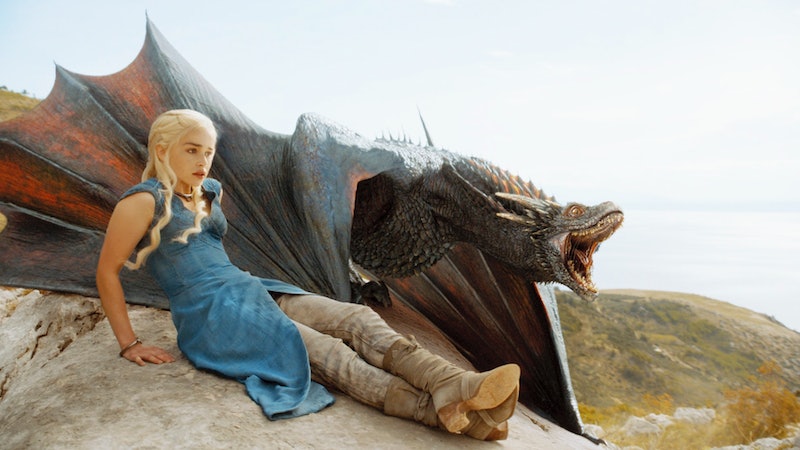 The final season of Game of Thrones garnered many Emmy nominations — 32, to be exact, which of course is a massive number even for the highly successful show. And now HBO is in the process of trying to recreate that magic again with spinoffs set in Westeros. There are two series that are close to happening, and below you'll find everything we know about the Game of Thrones prequels so far.

What started off as five potential GoT spin-off shows in pre-production with the network, has dwindled down to three, according to The Hollywood Reporter. Of those three, one has already filmed a pilot episode, and a second is inching closer to an official pilot order. There's currently no information about the status of the remaining projects.

One thing that fans do know for sure is that Jon Snow, Tyrion Lannister, and Sansa Stark will not appear in any of the potential series, as they're all prequels, with the two major ones taking place hundreds to thousands of years prior to GoT. Despite calls for a sequel about what Arya finds West of Westeros, there's unlikely to be a true sequel anytime soon. Casey Bloys, HBO programming president, told THR that picking up a sequel "doesn't make sense for us," so your favorite GoT storylines are really done for good. But don't fret, because the prequel ideas do sound intriguing.

How Many Spinoffs Are Currently In Production?

In May of 2017 it was announced that four spinoff shows were in contention at HBO, and then a fifth was added, as a way to capitalize on the massive success and obsession surrounding Game of Thrones. Of the three that remain, only one has been given a pilot order, with a working title of Bloodmoon, according to The Sun. The second was just announced as getting close to a pilot order as well, and that one is going to be all about the Targaryens.

What Will Bloodmoon Be About?

The only GoT spinoff that has completed pilot production is one currently under the name of Bloodmoon, and it will focus on a time period in Westeros way before the era that included Jon Snow, Arya Stark, and Daenerys Targaryen. According to the official HBO site, Bloodmoon will "chronicles Westeros' descent from the golden Age of Heroes into its darkest hour." It sounds like it will also give more info on the White Walkers, which is great since the final season didn't answer many questions about their intent and true origin.

It also promises to delve into more of what the East holds and about "the Starks of legend." HBO also wrote that the show will turn what you think you know on its head. As reported by NME, all of the pilot's filming spots were places GoT has used before including Belfast and Italy.

Who’s Going To Star In Bloodmoon?

The series has a star-studded cast. It was confirmed last October that Naomi Watts has a lead role in the spinoff, as reported by Variety. HBO also reported the other members of the cast including, Miranda Richardson (Harry Potter), Marquis Rodriguez (Manifest), John Simm (Strangers), Richard McCabe (Electric Dreams), John Heffernan (Dracula), and Dixie Egerickx (Summerland). Some other familiar faces include Josh Whitehouse (Poldark), Naomi Ackie (Lady Macbeth), Jamie Campbell Bower (Fantastic Beasts: The Crimes of Grindelwald), and Georgie Henley (Chronicles of Narnia), among others.

The spinoff is co-created and co-written by Jane Goldman and George R.R. Martin, according to THR and HBO. Goldman has a very impressive resume, which includes writing the upcoming adaptation of Rebecca, Disney's live-action The Little Mermaid, the Kingsman movies, and much more, via IMDb. Also, it was announced in January that S.J. Clarkson would be directing the pilot as well. She's known for her work on some really cool shows, including Jessica Jones, Succession, and The Defenders.

Is There A Release Date?

There isn't a release date, as it's only been ordered for a pilot so far. The pilot finished filming earlier this summer, according to THR, and the cast and crew are waiting to hear if they'll receive a series pickup from HBO. Bloys told Deadline that even once a series order is given, if it is, a launch date won't be on the horizon too soon, either. So basically, patience is very important right now, as all Game of Thrones fans know well.

So What's The Second Show About? Will It Include Dragons?

If you're a Targaryen fan, as many still are, then this is certainly the show for you. Entertainment Weekly reported on Sept. 12, that a second GoT spinoff series is heading to a pilot order as well. This series would include storylines about the 150 year history of the Targaryen family that Martin documented in his book Fire & Blood. According to EW, the series would focus on The Dance of the Dragons, aka the civil war within their house. So, yes, there will be many dragons in this series, and more "mad" Targaryens as well.

Who Is Involved With The Targaryen Spinoff?

As of right now, Colony co-creator Ryan Condal is writing the script for the pilot, but it's gone through many hands at this point, according to EW. Deadline reported that the show will take place 300 years prior to the events of Game of Thrones, and starts when House Targaryen takes up residence at Dragonstone, where Daenerys was born. Considering the massive fanbase Daenerys and the Targaryens still have, plus the added mystical aspect of dragons, this pilot has a good chance of making it to series.

There are a lot of uncertainties when it comes to these GoT prequels, but thanks to the massive cultural impact the original series had, at least one of these will likely make it to series.

More like this
'The Sandman’s Ending Is A Departure From Neil Gaiman’s Comic Book Series
By Kadin Burnett
The 'PLL: Original Sin' Creators Say A’s Identity Will Be “Very Clear” By The Season Finale
By Alyssa Lapid
Everything To Know About 'Evil' Season 4
By Meguire Hennes
How Lady Gaga & Adele Are Closer To The EGOT All Of A Sudden
By Jake Viswanath
Get Even More From Bustle — Sign Up For The Newsletter