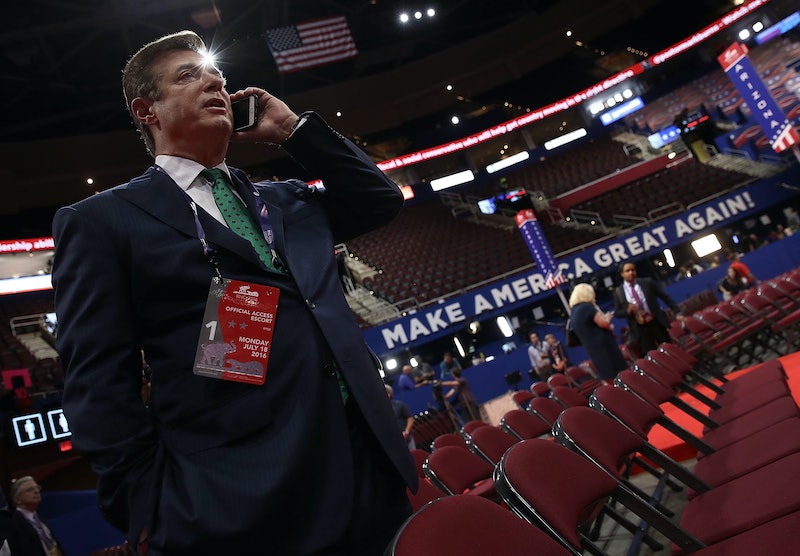 According to a CNN report, communications intercepted by U.S. intelligence agencies show Russians discussing coordination with Donald Trump associates in an effort to swing the election away from Hillary Clinton. CNN reports that the suspected Russian operatives referenced Paul Manafort, Trump's former campaign manager, in their conversations about working with the Trump team. The president and the White House deny that anybody on the campaign colluded with Russian officials during the campaign.

The FBI first began investigating ties between Trump and Russia in July 2016, former FBI Director James Comey said in testimony to Congress. That investigation has since widened to include possible financial crimes, CNN reports, as well as actions taken by Trump and his associates to stifle the original investigation that could potentially qualify as obstruction of justice. Multiple news organizations have reported that Trump himself is under investigation; the president's legal team has given conflicting statements as to whether or not this is the case.

Manafort joined Trump's campaign in March 2016 to lead its delegate-gathering effort in the run-up to the Republican National Convention. He later became Trump's campaign manager, where he remained until late August. He is reportedly one of a few central figures, alongside Flynn, being investigated by Mueller.

The CNN report says that Russians, in conversations intercepted by U.S. investigators, discussed working with the Trump team in order to influence the election, and that these conversations "included references" to Manafort.

Before joining the Trump campaign, Manafort worked as a consultant to former Ukrainian President Viktor Yanukovich, a staunch ally of Russian President Vladimir Putin. During the campaign, a handwritten ledger was found in Ukraine that detailed a previously-undisclosed $12.7 million in payments, allegedly to Manafort, from a pro-Russian political party. The ensuing controversy was in part what led to his departure from the Trump campaign, and the Associated Press later confirmed that Manafort's firm did receive at least $1.2 million from said political party — although this occurred years before he joined the Trump campaign.

In July, it was revealed that Manafort — along with Trump's son Don Jr. and son-in-law Jared Kushner — attended a meeting with a Russian lawyer and others at Trump Tower in June 2016 in order to receive incriminating information about Clinton. Emails released by Trump Jr. himself indicate that this is why he decided to take the meeting, and furthermore, that he had been told that it was part of a Russian government-sponsored effort to support his father. Soon thereafter, both Manafort and Trump Jr. were subpoenaed to testify in front of the Senate Judiciary Committee, which is investigating Russian meddling in the 2016 election.

Manafort himself has said that he "knowingly never talked to any intelligence official or anyone in Russia regarding anything of what's under investigation." When asked about the most recent allegations, a lawyer for Manafort told CNN that it "is becoming increasingly apparent that there was no collusion between the campaign and the Russian government."