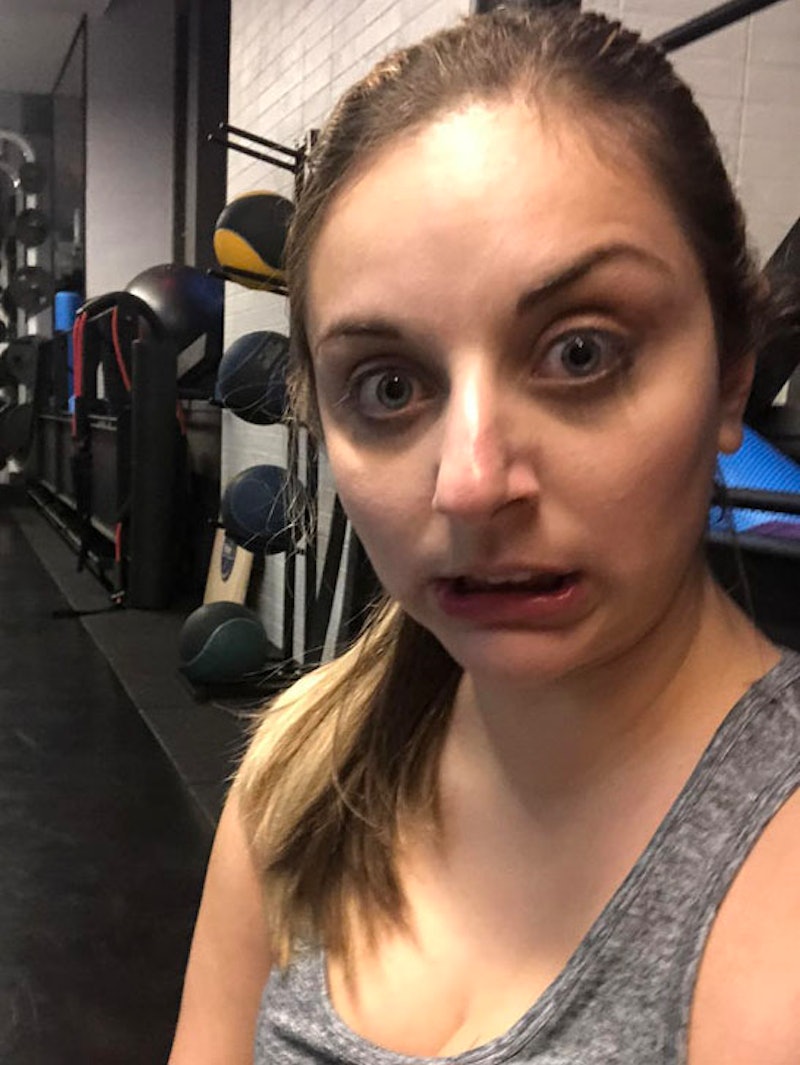 The thought of exercising has always made me anxious. I can still remember how humiliating it was to run a mile in my high school's gym class. My classmates, who had run laps around me with ease, watched from the sidelines while my cheeks flushed red and I tried not to pass out. Flash forward to adulthood, and the same intimidating experience took a new form. After college, I signed up for a gym membership, and told myself I would go regularly. But when I got there, the aspiring #fitfluencers expertly jogging on the treadmills, tackling the stair climbers, and maneuvering free weights reminded me of the same painful feelings of inadequacy I'd felt in gym class years ago. Exercise wasn't about doing something good for myself — it was an elite club I never felt I belonged to.

Now, after years of tackling my general anxiety through therapy, it was time to address my anxiety around exercise. But as determined as I was to view my fitness in a new light, I still needed to confront my fears. The first being that I simply couldn't do certain physical activities because my body couldn't yet handle it, and the second being the fear of embarrassing myself if I attempted them anyway.

I decided to just throw myself into it, no questions asked, and prove to myself I am actually capable. During the month of October, I aimed to tackle cardio, strength training, and fitness classes that were totally foreign to me, and move past my hang ups. Here's how it went.

In my 25 years on earth, few things have inspired such a heady blend of ire, dread, and nervous eye twitching in me as running does. You would think such an innate survival mechanism would come naturally to me, but I'd rather crab walk backwards around a track four times then get on my feet and go for a jog. So guess what I was going to do for a week? Run.

But since I had no idea where to start, I asked professional runner and Brooks Running athlete Gabe Grunewald to coach me through my first attempt at self-inflicted torture, ehem, running.

"I do think running can be a little bit scary at first," Grunewald tells Bustle. "One of the best ways to get into running is to embrace a training plan, but it doesn’t have to be anything too technical." She suggests starting with a walk/run program, which involves intervals of running followed by walking.

When she put it that way, it sounded extremely doable. There was still a nagging feeling that I was somehow taking the easy way out, but Grunewald assured me that's common. "I think that a lot of us have a tendency that we want our runs to go a certain way, we want them to be A plus efforts or else we think that they're worthless," she said. "But I definitely think that [it's worth it] just completing the work out even if it's not going great, [because] you're still getting benefits out of it."

And although it was still very TBD on how my running would go, I put on some sneakers and went for it. I headed to a park in my hometown, and started speed-walking around the track. As Grunewald suggested, I timed myself for five minutes, then switched to running for two minutes. I was surprised by my ability to continue to launch forward, despite the wind pushing me back. I didn't die per se, but it wasn't easy either. By the end of my run/walk — 30 minutes, can you believe? — I felt winded, and my lower back hurt a bit. My form was off, my breathing was definitely incorrect, but I did it. I wasn't feeling a runner's high, but more of a runner's afterglow. I did the damn thing.

I tried running twice more that week, and once more the following week. Hardly the rigorous regimen of serious runners, but I strove to build my way up. At first, I was surprised at how achievable a 30 minute treadmill run was. I continued on my two minute/five minute walk/run routine, until I upped it to four minutes/five minutes. By my last run, I found myself jogging for a full 15 minutes straight. This is something I could definitely keep doing.

I Discovered Strength Training May Be Harder Than Running

While running scared me, strength training intimidated me. I'd tried a few classes before, but often felt inadequate compared to the pros who attended class regularly. But far worse was the silent power dynamic that existed at a gym's free weights section: The swole men bench-pressing my body weight, grunting loudly, and staring daggers in my direction kept me far, far away.

I reached out to Equinox, which offered me a month-long membership and an opportunity to train with Tier 3+ personal trainer, Alessandra Scanga, for this story. I explained my fear around using the free weights, but she had some solid advice for me. "I think intimidation is a huge factor for women, when it comes to the weight room or the gym," Scanga tells Bustle. "And you kind of have to get yourself out of that mindset that people are watching you, or judging you, and you have to do it for yourself."

With that in mind, I threw myself into my first session. Scanga instructed me on the proper form during a few intervals of exercise. There were squats, there were deadlifts, there was walking across a gym floor with a band of death squeezing my thighs. But these were all things I wanted to learn, and Scanga was happy to show me how to do them correctly.

Then, bent over a bench, working on my triceps, my worst fear was realized. I started seeing spots in my vision, and suddenly felt like I was going to pass out. Feelings of embarrassment and immediate panic washed over me as the color drained from my face. Trying to act calm, I sat on the bench and told Scanga I needed a minute. She assured me I was doing the right thing by listening to my body, and she grabbed me a cold, eucalyptus-scented towel.

When I finally left the gym that day, dizzy and nauseous, I began to doubt myself all over again. Was I so profoundly out of shape that I couldn’t handle a full training session? My renewed sense of capability diminished to the size of a pea. It felt like there really were things I just couldn’t handle, and that knowledge began to spiral into every excuse to stop my experiment. I decided that to renew my determination, I needed to pivot to something else.

I Attempted To Take Classes While Also Trying To Move

Even when you have the best intentions, life still gets in the way. Launching into my last part of my experiment — taking classes I’ve never tried before — I also unexpectedly had to move. As a result, the stress of moving very last minute kept me away from my workouts, and I needed to make some adjustments.

Before moving madness began, I was given the opportunity to visit spinning studio FlyWheel's headquarters and take a live-streamed class on their at-home bike. Although I’ve never taken a spin class, I jumped at the chance of trying one remotely, so I wouldn't have to work out in front of a bunch of other people.

Although I only experienced 20 minutes, spinning felt like the perfect balance of challenging and invigorating. I left still nervous to try a full class, but I put spin on my list of things to explore once this experiment was over.

I Went For Something Familiar

Coming off my FlyWheel high, I was ready to try other classes I was previously too afraid to sign up for, but I was feeling overwhelmed by the demands I'd put on myself, between trying to treat my exercise anxiety with exposure and, now, moving. I felt like I only had myself to blame, but instead of pushing myself to the brink, I decided to treat myself.

Yoga has always been my comfort zone, and as much as I wanted to push myself, I needed help with my anxiety. ClassPass offered me credits to try out its service for this story, so I visited Reflections Yoga Center and took a Vinyasa class. I felt restored and more whole than I had in weeks. Yes, yoga may be nothing new for me, but it still felt like the only exercise I could do that not only didn't induce my anxiety, but helped relieve it. And I was starting to realize, that was perfectly OK.

In many ways, this experiment changed my perception of exercise, while also enforcing a lot of the things I already believed. Discovering a love for spin and a tolerance for running felt like mini victories in the face of my strength training setback. I could exceed the bounds of my personal restrictions, but within reason. I would have to build up to the rest.

Ultimately, my greatest takeaway was to not only try to be kinder to myself, but be kinder to my body. There is a lot of rhetoric that still exists in the world of exercise that will try to make you believe your body is somehow the enemy. Even though my goal was never to focus on numbers, I was weighed and given my body fat percentage. I was ranked compared to how others had performed in the same activity, and came in last. I tried to ignore it, but these numbers stuck in my head, fueling my feelings of inadequacy that had prompted me to start this experiment in the first place.

But as much as that voice, both internal and external, is still trying to make me feel incapable, my new goal is to press on. This experiment has taught me to be more open to challenging myself, but in a way that is defined by my own parameters. It also reinforced my feeling that exercise is an act of self-love, and I hope to have more compassion for myself when I’m having an off day. Some days I may feel like pushing myself, others I may curl up in child’s pose, and breathe through it. And there’s nothing wrong with any of that.