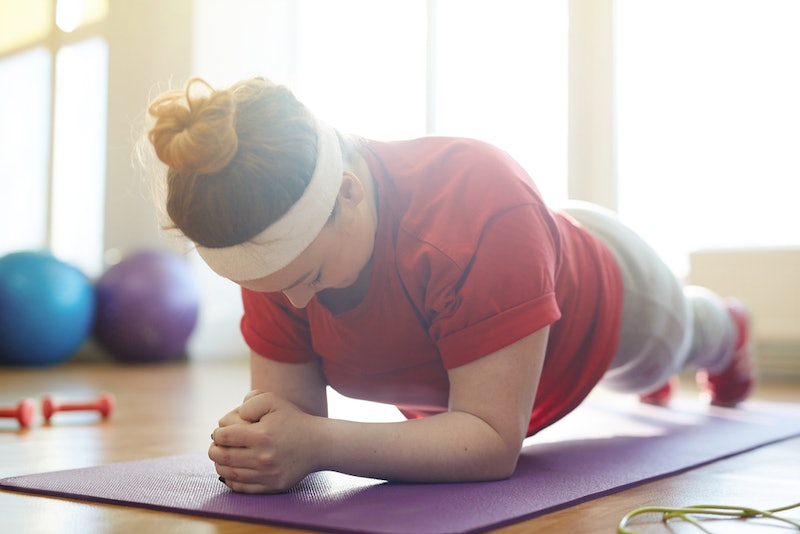 Have you ever been in an exercise class where the instructor just will. not. stop talking about "summer bodies," and it throws off your game for the rest of the day? As it turns out, a new study from Northwestern University found that exercise instructors' comments can impact your workout more than you'd think. The study, published in the Journal of Clinical Sport Psychology, discovered that instructors who made motivational comments that focused on strength and health versus things like weight loss helped improve the mind-body satisfaction of the women in their classes.

The assumption that everyone seeks out fitness as a path to weight loss is a dangerous one, and one that, according to science, now can mess with how your workout boosts your mood (which is, of itself, a major reason people work out). "Our goal was to determine whether the psychological outcomes of a fitness class might vary based on whether the instructor made motivational comments based on health verses appearance," Renee Engeln, lead author of the study and professor of instruction in psychology in the Weinberg College of Arts and Sciences at Northwestern, said in a press release.

The study reported that women felt happier with their bodies post-workout when the instructor said things like: "This exercise is crucial to developing strength in the legs; these are the muscles that truly help you run, jump, sprint like a super hero!" Um, yes please!

Women assigned to another class had a very different experience. In the second class women had an instructor who used language designed to shame them. Those who took this class did not leave feeling good about themselves, according to the study. After the classes, each woman was asked to list three words to describe how they felt about themselves. Women who took the positive class said they felt accomplished and strong while the women who took the negative class listed words like ashamed and disgusted.

"The women in this study all did the same exercises, in the same room, with the same music playing,” Engeln said in the press release. "Yet just modifying the script the fitness instructor used had a meaningful impact on the way they felt about themselves afterward." She added that people are more likely to stick to an exercise routine if they don't feel shamed, and instructors can attract more people to their classes by creating a positive environment.

Another study from the American College of Sports Medicine found that creating positive associations with exercise from a young age can help people develop lifelong fitness routines. And it all starts in gym class. According to the study, negative experiences in gym class make people less likely to pursue physical fitness as adults while positive experiences have the opposite effect.

This means that using motivating language during all types of fitness classes, from toddlers to adults, is a path to health, strength, and empowerment. If you think about it, this is true for pretty much everything in life. Shame is a barrier to success, and no one deserved to be shamed on their path to self improvement.

More like this
How Many Burpees Should You Do Per Day? Here’s What Fitness Trainers Say
By Carolyn Steber
The 11 Benefits Of Aerial Yoga, According To Trainers
By Carolyn Steber
How Often Should You Do Yoga? Here's What Trainers Say
By Carolyn Steber
How Ovulation Affects Your Sense Of Smell, Libido, & More
By JR Thorpe and Lexi Inks
Get Even More From Bustle — Sign Up For The Newsletter
From hair trends to relationship advice, our daily newsletter has everything you need to sound like a person who’s on TikTok, even if you aren’t.