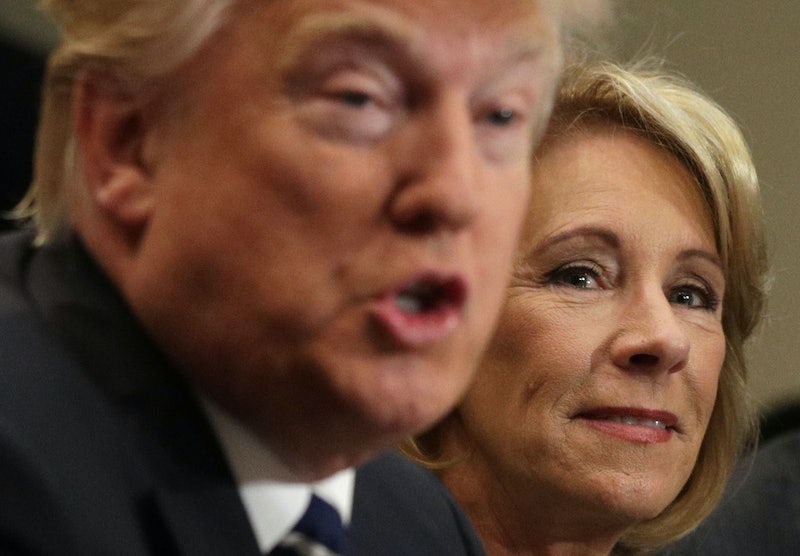 Despite an early executive order from Donald Trump vowing to protect LGBTQ rights for federal workers, reports surfaced Tuesday that the president plans to roll back Obama-era guidelines on transgender students’ bathroom use in schools. But alongside this story was a behind-the-scenes piece from the New York Times which presented an unlikely advocate for transgender students — Betsy DeVos, the newly and barely confirmed education secretary. The revelation was so surprising — and liberal expectations for the Trump administration are so low — that DeVos has been lauded for merely resisting.

According to the New York Times, which cited three unnamed Republican sources, DeVos, whose family has previously supported anti-LGBTQ causes, resisted signing off on the roll-back being pushed by Attorney General Jeff Sessions. Sessions, whose anti-LGBTQ efforts are well known, apparently fought DeVos on the issue, since the guidelines were originally jointly issued by the Departments of Justice and Education.

In the end, DeVos’ efforts were in vain. According to the New York Times, the education secretary was overruled by Trump himself, though the two departments are still in discussion over the final wording of the order; one source told the New York Times that DeVos is attempting to include the line “Schools must ensure that transgender students, like all students, are able to learn in a safe environment” in order to combat bullying.

As the New York Times puts it, DeVos was forced to choose between “resigning or defying the president, chose to go along.”

So, is DeVos a hero?

“Credit where credit is due,” says Mark Stern on Slate’s Outward blog. “Though we don’t know her reasoning, DeVos deserves praise for fighting Sessions’ outright hostility toward trans people.” While Stern has a point, it should be noted that this entire story hinges on the New York Times’ reporting — and that DeVos’ reported resistance to the order has all been backstage. On Wednesday, White House Press Secretary Sean Spicer said there was "no daylight" between DeVos and Sessions on the matter.

This seems in keeping with DeVos’ personal attitude towards LGBTQ rights — in a separate article by the New York Times, colleagues speak of her quiet support for LGBTQ rights. It’s an interesting story, except it appears to me that DeVos wants to be on the right side of history, as long as she doesn’t make a big deal about it.

While it’s certainly preferable to have a quiet advocate to no advocate at all, I worry that because of the lack of compassion displayed towards marginalized groups by Trump’s White House, we’re starting to mistake tepidity for actual warmth. Let's not forget DeVos is a hyper-wealthy white woman who wants to destroy public education as we know it, and a brief moment of unclaimed resistance — even if she is able to include her anti-bullying line in the final draft — will mean little to the trans children who are forced to use bathrooms which don’t match their gender identity.