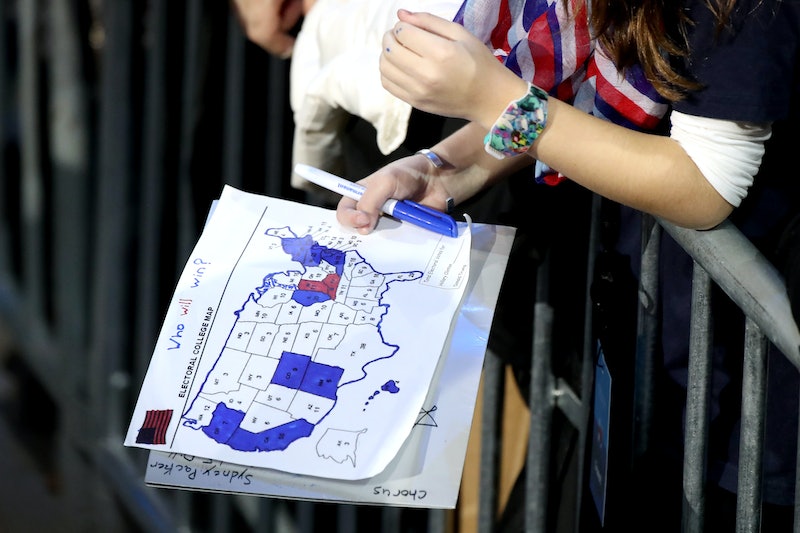 A presidential candidate who wins the majority of votes doesn't necessarily win the election — just look at how 2016 turned out. Instead, candidates play the electoral college game, focusing heavily on so-called swing states with the goal of winning over state delegates, and ultimately, the presidency. But while the 2020 swing states will likely get a lot of attention, at the end of the day, candidates themselves are still the most important factor in a race, polling experts tell Bustle.

According to Politico, pollsters can mostly accurately predict which way voters in most states will lean during a presidential election because those patterns have been established over time. California, for example, virtually always votes for Democratic presidential candidates; South Carolina almost always favors Republicans. But in 2016, it wasn't so clear which presidential nominee had an edge over the other in 11 states: Colorado, Florida, Iowa, Michigan, Nevada, New Hampshire, North Carolina, Ohio, Pennsylvania, Virginia, and Wisconsin.

"At this stage, I expect the [2020] swing states to look a lot like 2016, with a little more purplish hue put on some southwestern states such as Arizona and Texas," Patrick Murray, the Polling Institute director at Monmouth University, tells Bustle. "That’s driven by college educated women in those states, along with Latino voters."

Because campaigns generally consider the vast majority of states and their corresponding Electoral College votes to be predetermined, organizers prioritize campaigning in places where the election seems like more of a toss-up. This is because, as Al Jazeera reports, 48 states and Washington D.C. have winner-takes-all Electoral College systems. That means the candidate that wins the most ballot box votes will scoop up all of the electoral votes in that state.

But, experts tell Bustle, just because a state is considered "swingy" during one election doesn't mean that will always remain the case. Voter demographics, gerrymandering, and voter enfranchisement can play a role, they explain — but so do candidates and the issues they champion.

Murray says that to what extent swing states change in 2020 "will depend on who the Democrats nominate, so we won’t have a good idea until about a year from now."

Jason Mollica, a lecturer at American University who says he was a producer on Fox News' 2004 election coverage, agrees. He tells Bustle that while politics has definitely become more divisive in the last couple of years, candidate messaging will still play a big role in how successful a campaign turns out to be.

"In many ways, it does depend on a candidate, and that's still rings true," Mollica says. "If a candidate on either side does not really excite someone, if ... you don't feel that there is a connection, you're not going to vote for them."

Experts who spoke to Bustle had many ideas about how new swing states might develop during the 2020 presidential election. They pointed to Arizona, Nevada, Virginia, and Michigan as examples of states that might become or remain newly "swingy" in the upcoming year. But all agreed that it was a bit too early to know for sure, and underscored that candidates and the issues they campaign on will likely have the greatest impact on those kinds of shifts.

"That's what I'm looking at — just to hear what the candidates are talking about and seeing what message really resonates," says Spencer Kimball, director of Emerson Polling.

Kimball points to the recent string of abortion bans that have passed in states like Georgia and Alabama as an example of a galvanizing campaign issue. Topics like that, he says, can bring out new or unanticipated voter populations that can impact presidential elections. He says we saw this concept play out in 2016, when then-candidate Donald Trump did unexpectedly well in blue states in the northeast. At the time, the Trump campaign pushed "America first" policies, focusing on topics like immigration, border security, and rehabilitating the coal and gas industries.

Although Democratic candidate Hillary Clinton ultimately won New England states, the race was closer than one might expect given how that region traditionally leans, Kimball says. This suggests that Trump not only attracted people who don't typically vote, but also changed the minds of those who traditionally vote for Democrats, he adds — and that could happen again in 2020.

Like Mollica and Murray, Kimball notes it's a bit too early to determine exactly which states will be toss-ups in 2020. Democratic candidates, he says, will campaign accordingly, by throwing out ideas and seeing what resonates where.