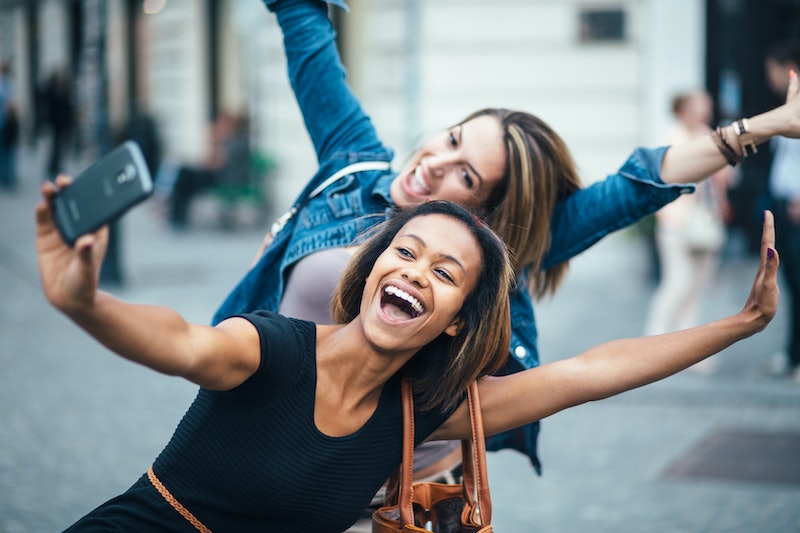 Are you one of those people who ruins every picture because you can't seem to take a photo with your eyes open? I am! One of our favorite social media platforms found a way to do something about it. Facebook can fix photos where your eyes are closed by sort of editing over them with your own eyes open, as long as they have other photos of you to reference, according to information shared on Facebook Research. They're calling it eye in-painting, and it's a tad bit freaky how real it looks.

Here's how it works. Facebook uses something called exemplar generative adversarial networks, or ExGANs for short, says the research. As The Verge points out, this type of machine learning can help to generate fake imagery, like faces — something accomplished by technology company Nvidia Corporation. This time, Facebook researchers used ExGANs to take photos where people's eyes are closed, and open them.

As The Daily Dot points out, it isn't 100 percent accurate — not yet, anyway. If the face in the picture is situated at a sharp angle, if the person is wearing glasses, or if long hair is covering their eyes, it will be harder for The Book of Face to replace their closed eyes with open ones. Still, the results are pretty amazing/weird.

Is it completely convincing? Well... yeah... kind of. If you were to glance at the pictures of the people with their eyes open, would you ever suspect the photos weren't original? I wouldn't. Sure, there could be cases where the eyes wouldn't be a perfect match. For instance, if — in the original picture of the person with their eyes closed — they're still smiling, if Facebook were to edit over it with open eyes from a picture where that person wasn't smiling, you could maybe (maybe) sense that something was off about their expression.

But honestly, probably not.

For now, it looks like this is merely something Facebook Research is working on internally, The Daily Dot notes, and not something you'll see on your own account — although at the rate Facebook is expanding and becoming more sophisticated, who knows what the future holds?

The technology seems to work a little too well, but let's be honest with ourselves: this is hardly the extent of Facebook's knowledge. Don't forget that long ago, Facebook was able to detect who is in your photos so you can more easily tag them. It understands who you're closest to so you're likelier to see their posts in your news feed.

It uses your habits and interests to figure out what ads you'll respond best to, and it suggests people you might want to become friends with. This must explain all the videos I see advertising meatless burgers and why my ex keeps popping up under People You May Know. How about no, Facebook?

This platform has been reading our minds and messing with us for years!

The technology is powerful and the applications are endless, but with great power comes great responsibility. ExGans could be of used for things like animated entertainment and advertisements, but seeing how good it is at creating faces out of nothing? That's pretty incredible, but also kind of unsettling. Just look at them.

To be fair, it's not all that different from the other capabilities Facebook already has. In the right hands and for the right reasons, it can be used in positive ways. Abuse it in any way, though, and we could have some trouble on our hands.

That point has been made quite obvious thanks to the concern over data and privacy, but that's a story for another article.