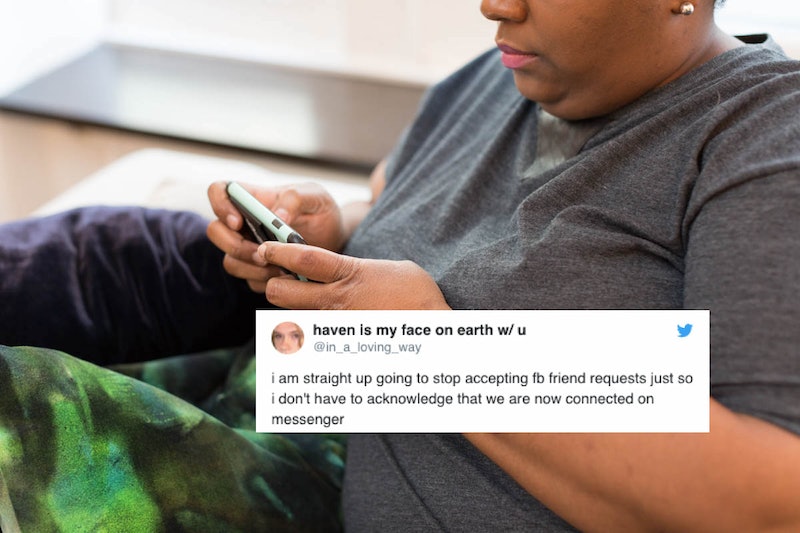 You've been through the rigamarole: you spy an old friend, or a new colleague, in that "People You May Know" window to the left of your news feed on Facebook. You add them as a friend, and wait a few minutes, maybe a few hours, for them to accept the connection. Then, you get not one, but two notifications: one, announcing that you are now connected on Facebook, but also that "You are now connected on Messenger," Facebook's separate chat function that exists as an independent but linked app on your phone. But now, that extra Facebook Messenger notification might be on its way out.

Facebook released a statement to TechCrunch indicating it may be planning to upgrade Facebook Messenger and scale back the number of alerts users are sent. "We’ve found that many people have appreciated getting a notification when a friend joins Messenger," a representative for Facebook told TechCrunch. "That said, we are working to make these notifications even more useful by employing machine learning to send fewer of them over time to people who enjoy getting them less. We appreciate all and any feedback that people send our way, so please keep it coming because it helps us make the product better."

The renewed interest in this seemingly-superfluous notification comes days after a June 6 BuzzFeed story that highlighted the scale of messages Facebook's Messenger app sends about how you and your new friends are now connected. As Katie Notopoulos wrote for BuzzFeed, "Facebook is overloading us with useless alerts at a very fragile moment in our digital lives." She described the excitement of getting the ping of a new message notification, assuming a friend wants to chat, only to realize the message is an auto-send from Facebook that doesn't actually give us necessary information. "Something is fundamentally broken about the way our brains are absorbing all these notifications," she said. "Alerting us when we’ve connected to someone on Messenger might just tip us into lunacy."

What these new, potential changes would do is see if you open these notifications, signaling that you find them useful, and scale back on sending the notifications for people who don't engage with them. As Tech Crunch put it, "If Messenger notices you never open those spammy alerts to start a chat thread, it will skip sending some of them." Of course, this plan would backfire for those of us who open chats just to get rid of the red notification bubble (hello), but it's a start. Facebook isn't exactly allowing users to opt-out of getting these notifications wholesale, but once their artificial intelligence catches onto the fact that you think "You are now connected on Messenger" notifications are less than helpful, it would in theory reduce the number of them you receive.

The Messenger app has had a contentious run, with pushback from users after Facebook stripped messaging capabilities out of the Facebook mobile app and separated Messenger into its own app in 2014. At the time, Facebook CEO Mark Zuckerburg explained the change-up in a live Q&A session reported by The Verge. "The primary purpose of the Facebook app is News Feed," Zuckerburg said. "Messaging was this behavior people were doing more and more. 10 [sic] billion messages are sent per day, but in order to get to it you had to wait for the app to load and go to a separate tab. We saw that the top messaging apps people were using were their own app. These apps that are fast and just focused on messaging. You're probably messaging people 15 times per day. Having to go into an app and take a bunch of steps to get to messaging is a lot of friction."

And it looks like Facebook's possible upgrades to Messenger will also be aimed to reduce friction among users. No planned timeline for the changes has been given, but if and when Facebook notes the release of Messenger upgrades, it's important you remember that Facebook's machine learning will only learn the depth of your displeasure with "You are now connected on Messenger" notifications if you don't engage with them. For some users, it sounds like that won't be a problem.