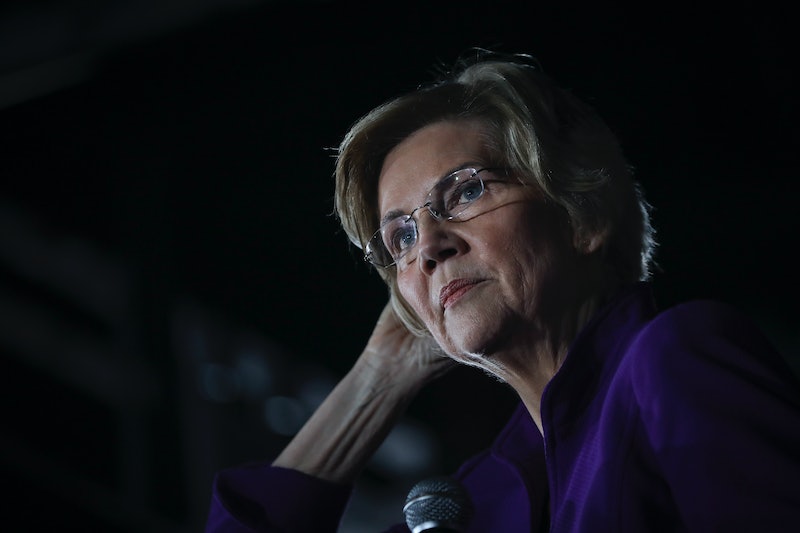 As the 2020 race inches along, one presidential hopeful is sounding the alarm on tech giants. After releasing a plan to break up certain big companies, Sen. Elizabeth Warren said Facebook censored her ads attacking the platform. Facebook said Monday that it was in the process of putting the ads back up after the backlash.

"Three companies have vast power over our economy and our democracy. Facebook, Amazon, and Google," the ads read, according to Politico, which first reported the story. "We all use them. But in their rise to power, they've bulldozed competition, used our private information for profit, and tilted the playing field in their favor."

Warren's campaign put the ads up on Friday — the same day she released her plan to break up the companies — and were soon removed. According to Politico, a message was placed on the images reading, "This ad was taken down because it goes against Facebook's advertising policies." The platform told The Guardian that its policy forbids use of the corporate logo in its advertisements, and other anti-big tech ads Warren published Friday were allowed to stay on the platform.

A company spokesperson told Bustle that Facebook put the ads back up on Monday afternoon "in the interest of allowing robust debate."

Warren slammed Facebook for temporarily taking down her ads. "Curious why I think FB has too much power?" the senator tweeted on Monday. "Let's start with their ability to shut down a debate over whether FB has too much power." Later, she added: "You shouldn't have to contact Facebook's publicists in order for them to decide to 'allow robust debate' about Facebook."

Warren's plan to break up big tech companies is meant to reinstate what she calls "healthy competition" in the market. She argues that some corporations have consolidated so much that they wield unjust amounts of economic and political power. She notes that many businesses profit off customers' private information and that monopolies make it harder for new tech companies to compete and innovate in the market.

Part of Warren's proposal addresses companies that own an online marketplace and also sell their own products in that marketplace. Under her plan, each of these businesses making over $25 billion annually would have to "structurally separate" its marketplace and products. Companies making between $90 million and $25 billion would not be forced to separate, but would face new regulations. If enacted, Google would not be able to use its search engine to promote its own brand items, according to The Verge.

The senator's plan would also prohibit companies from sharing user data with third parties and take steps to "unwind tech mergers that illegally undermine competition," according to The New York Times. That would include rolling back the merger of Facebook with Instagram and WhatsApp, as well as the merger of Amazon with Whole Foods.

"I want a government that makes sure everybody — even the biggest and most powerful companies in America — plays by the rules," Warren said in a statement after releasing her proposal, per The Times. "To do that, we need to stop this generation of big tech companies from throwing around their political power to shape the rules in their favor and throwing around their economic power to snuff out or buy up every potential competitor."