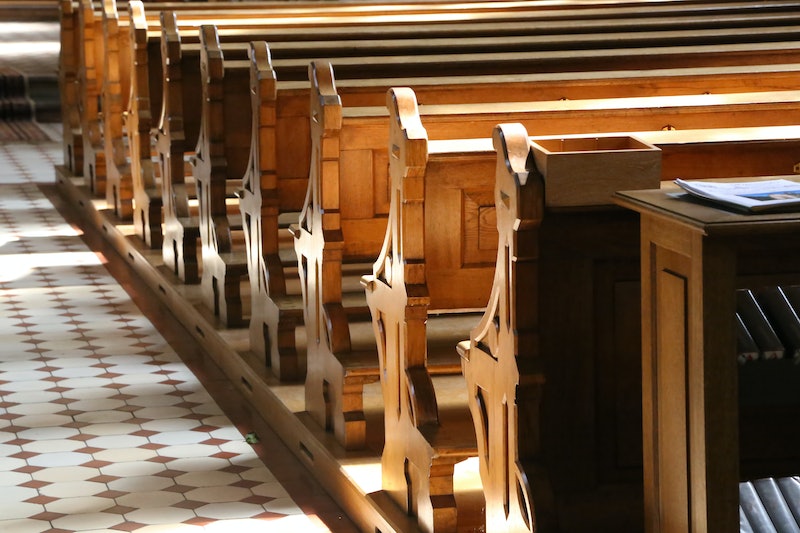 In Boston, Massachusetts, a few hours before Kol Nidre in September 2017, Tara found out the fetus she was carrying had a life-threatening condition. Although her previous two pregnancies had been met with concerns about growth, she tells Bustle they went on to develop without issue. But at her 28-week scan, the 34-year-old learned this time was different. She knew immediately she’d have to terminate the pregnancy. For traditionally observant Jews like Tara, it’s standard practice to discuss a decision like this with your rabbi beforehand. But because of the date — Kol Nidre is the evening service before Yom Kippur, the holiest day of the year in Judaism — her rabbi was unavailable. “By the time I could talk to her,” Tara says, “I was on a plane to Colorado,” one of the only states where you can get an abortion up to 34 weeks. They couldn’t connect until after she’d landed.

Over the phone, her rabbi reminded her not to cremate the body, per Jewish law, and made arrangements with funeral homes in both Colorado and Massachusetts. Rather than recite Kaddish, the traditional prayer of mourning, multiple times according to custom, they recited it just once. Tara sat shiva for one day instead of the traditional seven. “I was surprised how helpful I found shiva,” she says. “Our rabbi picked what she felt comfortable doing and designed a ceremony around that. It didn’t bring closure, but it was what I needed to do, and it made me feel like I had done the right thing.”

Many people will want to seek religious guidance before having an abortion, just like they would for other life issues. According to a report from the Guttmacher Institute, 62% of people who had abortions in 2014 reported a religious affiliation: 30% identified as Protestant, and 24% identified as Catholic. But despite this, religion has long been used to politicize abortion.

He loved me through my decision even if he didn’t agree with it.

In Washington state, Madison* actually leaned into her Catholic community for support. The twenty-year-old had initially planned to avoid the church when she found out she was pregnant unexpectedly last December, remembering the way her congregation had spoken out against premarital sex and abortion. A year earlier, she’d had an abortion to avoid raising a child with an abusive person. This would be her second.

Ultimately, she confided in her youth group, whose members connected her to the church pastor. “Speaking to him really did help me,” she says. “He offered to pray with me, and he loved me through my decision even if he didn’t agree with it.”

While Madison hasn’t returned to church since her abortion, she now attends bible study twice a month with college-aged students, who she says have never made her feel judged. “I feel much more comfortable with them, and I honestly feel we are raising a much more open-minded generation of young Catholics,” she says. She feels “very lucky” to have found her group.

Around the country, pro-choice faith leaders certainly exist. In San Antonio, Texas, Reverend Erika Forbes has counseled more than 50 women through their experiences with abortion. “I wouldn’t be a minister if I hadn’t had my abortions,” says Forbes, who currently serves as the Outreach & Faith Coordinator at Texas Freedom Network (TFN), a nonprofit that works to support religious freedom and personal autonomy in the state. Forbes chose to be a minister in part because she wanted to spread the message that people’s choices do not define them. Learning that lesson was “a turning point for me as a 15-year-old who had an abortion,” she says, and helped her feel comfortable having a second.

I asked Him to show me a sign that could tell me what I needed to do.

Now, in her work as a minister, Forbes performs healing blessings, release ceremonies, and spiritual counseling for people who are planning to have, or have already had, abortions. “I offer up opportunities to do healing rituals based on their experiences and where they are. I tell them I will be available to them for the rest of their lives,” she says. “Even though you feel it was the right decision, and you don't feel shame or guilt, you can still have other emotions that come up. I don’t have any pain, but I have emotions from [having my abortions] and this is why I do the work I do.”

About 300 miles north of Rev. Forbes, in Dallas, a 17-year-old was confronting an unintended pregnancy. Growing up, CoWanda, now 20, had been taught since childhood that sex before marriage was inappropriate. Her father was, and still is, a Christian minister, and she worried neither parent would support her decision. “My mom told me when I was 16 that if I ever got pregnant, I would have to carry to term,” she says. She was living independently from her parents at the time, but because she was a minor, CoWanda still needed parental permission to have an abortion. (According to Guttmacher, 37 states have laws requiring that a parent or guardian of a minor give permission for an abortion or be notified before the procedure.) “I started praying to God every day, and I asked Him to show me a sign that could tell me what I needed to do,” CoWanda remembers.

The sign came a couple days later from a friend, who told her about Jane’s Due Process, an organization that helps pregnant Texan minors get legal representation. The non-profit secured CoWanda a judicial bypass, meaning a judge could grant permission instead of her parents. She was able to have an abortion almost a week after finding out she was pregnant.

The following summer at a Christian youth camp, CoWanda shared her experience with her father, who was leading the group as youth minister, and her peers. “That’s what Christian relationships are about — sharing life experiences and testimony that reflect our faith,” she says. “I received love and care when I thought I wouldn’t.” Her father explained how the Bible is “full of decisions and choices,” she remembers, and he couldn’t fathom a God being against people having free will. Still, he agreed that had she spoken to him the previous year, he would have tried to change her mind. “But after hearing my story, he started relating some of my experiences to scriptures, fueling me with empowerment and supporting me with the word of God,” she says. “I believe God illuminated my father's eyes, ears, and understanding to embrace me as he should have, speaking to his daughter like I needed him to.”

Faith Aloud is an organization that provides free, compassionate counseling from clergy over the phone about all pregnancy options. People can call the clergy counseling line at 1-888-717-5010 to speak with faith leaders of diverse backgrounds who are trained to support all denominations.