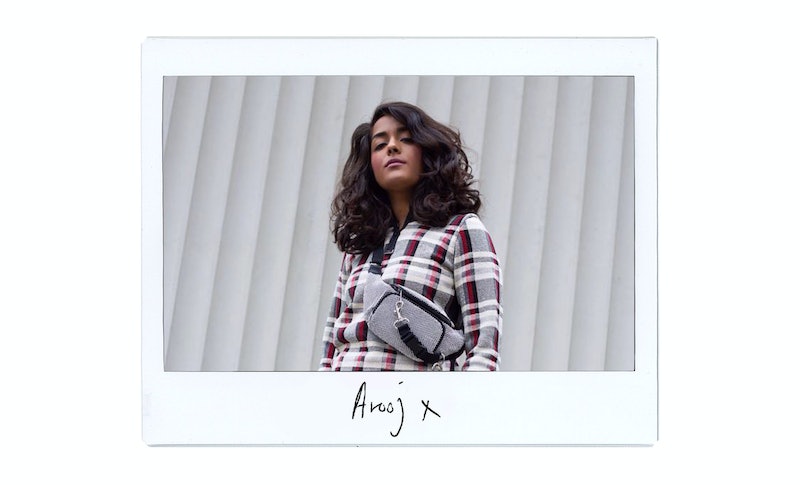 When celebrities hang out with Bustle editors, we want to give them the chance to leave their mark. Literally. So we hand them a pen, a piece of paper, a few questions, and ask them to get creative. This time, fashion blogger Arooj Aftab is leaving her mark in the Bustle Booth.

When fashion blogger Arooj Aftab first started posting her outfits on Twitter, she considered six retweets a pretty good response. "At that time, it was kind of a big deal," she tells Bustle. Things are a little different for the 23-year-old fashion blogger now: She shares her outfits to over 10,000 followers on Instagram, has led her own BBC documentary, and has a Cosmopolitan Influencer Awards nomination under her belt.

Aftab's style alone is enough to make her name. She is the Instagram authority on oversized outfits, expertly navigating layers and proportions to create effortlessly relaxed looks (a quick scroll through her feed will leave you ordering blazers and cargo pants in bulk.) Naturally, she works in fashion: until recently, she managed social media for a Manchester modelling agency, while she's also appeared in Vogue and Cosmopolitan.

But her style isn't solely a reflection of her fashion know-how: "I slowly transitioned into oversized fits as my body changed," she explains. Aftab has neurofibromatosis type 1, a genetic condition that results in the growth of tumours along her nerves. She concealed the condition under layers of loose clothing, hiding it from her followers online.

Until she didn't. "There's something that I want to share," she started an Instagram story in December 2018, her voice a little faint with nerves. "I'm here to be more authentic on my Instagram and really share my story. I'm going to share an image, which I'm really scared of sharing," she said. "My main aim is to raise awareness on this and really help other people who might be going through the same or similar." She proceeded to explain the genetic condition she's had since childhood, posting an image of the tumours on the side of her body.

With that disclosure, Aftab's career changed. The response was dramatic: she later wrote on Instagram, alongside a crying emoji, "I feel so light, like a weight's been lifted off my shoulders. I have so many people that have messaged. Did not expect this reaction!" She became an advocate for others with neurofibromatosis, working with the Childhood Tumour Trust and becoming a digital ambassador for the Prince's Trust. Shortly after her Instagram story, she appeared in the BBC Newsbeat documentary My Tumour Made Me Trendy, in which she shared her own experience of the condition and met with Adam Pearson, an actor and presenter who starred alongside Scarlett Johansson in Under the Skin and also has neurofibromatosis.

Now, Aftab's goals go beyond the fashion industry. "I’d like to have another documentary released, maybe go down the route of presenting," she says. Still, style remains central to her vision. She idolises Virgil Abloh, founder of Off-White and artistic director for Louis Vuitton menswear. "I like his values and what he stands for," she says. "I think I fell in love with him even more when he made the custom Off-White outfit for Serena Williams at the French Open." The style icon's style icons include Jayden Smith, A$AP Rocky, and Harry Styles ("I need all their wardrobes, pretty please!")

In the future, you'll see Aftab move from West Yorkshire to London. You'll see her taking "as many cool opportunities as [she] can," in fashion and beyond. And you'll see her developing her vital advocacy, "making a difference and continu[ing] to help empower people through clothing and fashion." One thing you'll never see her in, though? "Socks and heels," she tells Bustle. "It’s just not me, not vibing!"