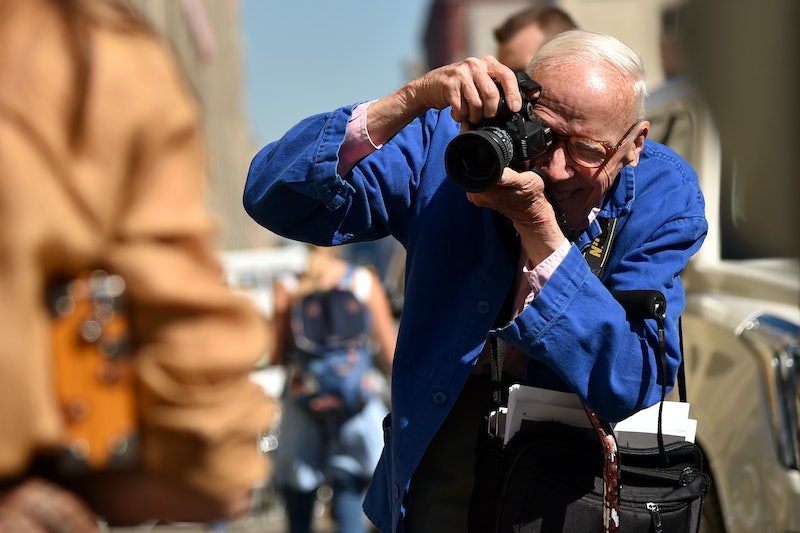 When street-style icon Bill Cunningham died in June of 2016, the fashion world mourned the loss of one of its most beloved designers and photographers. Now, two years later, fans of his famed "On the Street" column have a reason to rejoice, because according to a report by the New York Times published on Wednesday, Cunningham wrote a secret memoir before his death, and its hitting shelves this fall.

Aptly titled Fashion Climbing, Cunningham's memoir was discovered by his family who had no idea that their very private relative was even writing it. “Bill kept his family life in Boston and his work life in New York very separate,” Cunningham's niece Trish Simonson told the Times. “He told us stories over the years, but nothing that painted a full picture of what he did and how he came to do it. The drafts of the memoir we found, titled and edited and written in his own unmistakable voice, filled in a lot of blanks of how he made it from here to there, and what he thought along the way.”

After finding Fashion Climbing, Cunningham's family sold it at auction to Penguin Press, who will be releasing it this September ahead of New York's Fashion Week. According to the book's synopsis, it is the "untold story of a New York City legend's education in creativity and style." In the book's introduction, Pulitzer Prize-winning journalist Hilton Als describes Fashion Climbing as having a "Breakfast at Tiffany's Flavor," and I don't know about you, but that makes me want to read this newly discovered secret memoir even more.

Fashion Climbing: A Memoir with Photographs by Bill Cunningham, $17, Amazon

According to the book's publisher, Fashion Climbing includes little of Cunningham's personal adult life, but rather focuses on his transformation from a young boy in a Boston Catholic family to one of New York's most celebrated hat designers, and later, photojournalists.

In the Cunningham's own words, Fashion Climbing details a childhood spent wearing his sisters dresses and his stint in the Korean War, during which he famously decorated his helmet with flowers. It also follows Cunningham to New York, where he worked as a ladies milliner under the name "William J." before beginning his illustrious career in journalism in which he worked for the Times for nearly four decades. Although the book has little to do with his personal life as an adult — Cunningham was a notoriously private person with his friends and his peers — Fashion Climbin does offer fans a rare glimpse at the life of New York City's most legendary fashion and society photographers.

“Bill was a true original,” Christopher Richards, the editor at Penguin Press responsible for acquiring this promising gem of a memoir. “For me, this book is really for those of us who came to New York with a dream and saw New York City as a real oasis of creativity and freedom, a place to be who we want to be. It’s a really beautiful story about a young, artistic man finding his way in the city, in a particular kind of bohemian world that doesn’t quite exist anymore.”

Fashion Climbing, the book's title, is a reference to Cunningham's journey up the ladder in the fashion world, one he never fully expected to reach the top of. On one page of the discovered manuscript, there is even a little doodle of a young Bill climbing a latter. Next to reads "What will the neighbors say?," a line from the book the author attributes to his mother.

Fashion Climbing is scheduled to hit shelves in Sept. 4.