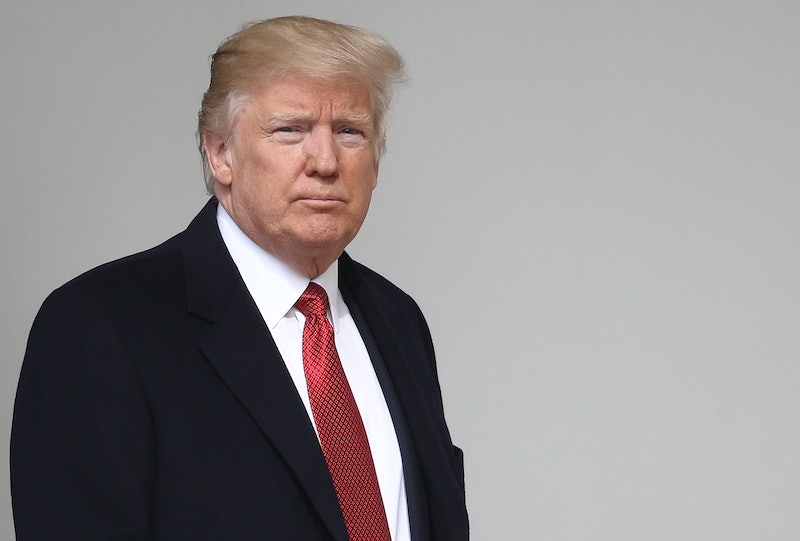 People have found a lot to criticize Donald Trump about since the real estate mogul officially announced his presidential campaign in June of 2015. But among the rebukes of his rhetoric, policies, and behavior, a new trend has emerged: memes that fat-shame Trump.

The list of instances in which Trump body-shamed someone is long -- too long for me to include here, as it reportedly goes back as far as the mid-'70s, when he would shame a female employee of his with an unflattering photograph of her looking "fat." But when Democratic nominee Hillary Clinton brought Trump's criticism of 1996 Miss Universe winner Alicia Machado's weight up in one of the 2016 presidential debates, people began clapping back at the real estate mogul's body-shaming ways.

That same week, The New Yorker parodied Trump as a fat, failed beauty queen, complete with thick thighs and running mascara in a cover illustration.

And on social media, it's not hard to find memes, tweets, and even entire accounts dedicated to poking fun at Trump's figure.

However, just because Trump prefers to deal in insults, stereotypes, and degradation doesn't mean you have to do the same. While some might attempt to justify memes centered on fat-shaming Trump as an attempt to shine a light on the hypocrisy of the president's own statements, all they really do is continue to perpetuate the idea that fat-shaming is a valid way to criticize people.

Similarly, such eye-for-an-eye fat-shaming reinforces the negative stereotypes about fatness, beauty, and fat people that birthed Trump's comments in the first place. Shaming another for their body or physical appearance is wrong. This is the foundation of criticisms against Trump's body-shaming and we must hold ourselves to the same standard we're asking him to abide by.

Moreover, it's hard to see Trump learning a lesson about the dangers of fat-shaming by having the tables turned on him, as his comments about women's bodies stem not from an honest concern or disgust for any added pounds but from a desire to exert his power over a woman by policing her body.

While there are plenty of things, large and small, for which one could choose to criticize Trump for, his weight should not be one of them. Attempts to fat-shame President Trump serve only to reinforce the idea that a person's weight or body shape somehow contributes to their value as a human being.

But guess what, it doesn't. Being fat is not a sin. Fatness has no relation to whether a person is trustworthy, intelligent, kind, disciplined, or confident. Rather it is merely a physical descriptor. So, let's change the conversation.