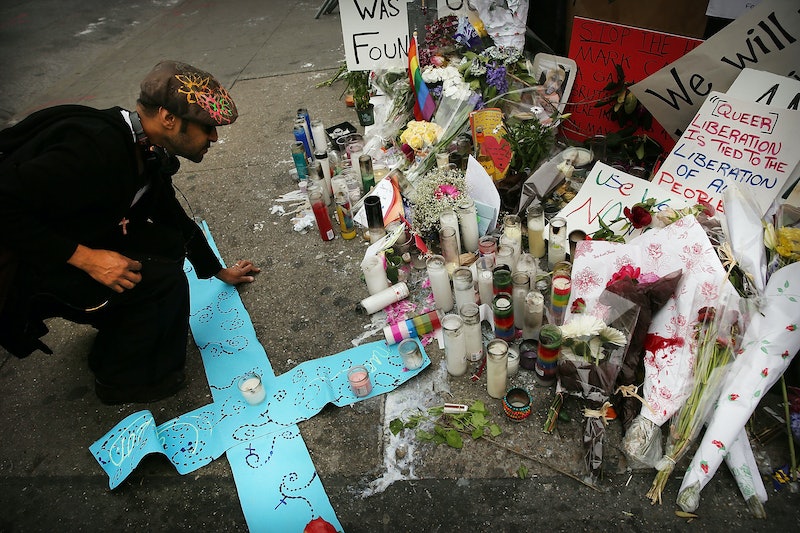 Even before a Trump presidency gave us an executive order barring immigrants from several Muslim-majority countries and a ban against transgender troops serving in the military, hate crimes in the United States increased in 2016, the second year in a row. According to a new FBI report released on Monday, there was an uptick in hate crimes against Jewish, Muslim, and LGBTQ people last year — and there was a 25 percent rise in hate crimes in the final three months of 2016, following Trump's election.

Although the Department of Justice estimates that 250,000 hate crimes are committed per year, the majority of those crimes go unreported. According to the FBI data, there were 6,100 reported hate crimes in 2016, up from 5,800 incidents in 2015 and 5,400 incidents in 2014. The majority of victims were targeted because of their race or ethnicity, the report says, with crimes against African-Americans by far the largest share in that category. Of the hate crimes motivated by religion, the report found 55 percent of the incidents were due to anti-Semitism, followed by 25 percent that were sparked by anti-Muslim views.

Several civil rights groups believe that hate crimes increased last year, in part, because people were energized by the anti-Muslim and anti-immigrant rhetoric President Trump used when he was on the campaign trail. Daniella Gibbs Léger, vice president for communications and strategy at the Center for American Progress, tells Bustle, "It's not surprising with the rhetoric you heard coming out of the Trump campaign, the things you saw at the rallies, the things [Trump] would retweet ... There are many actions that have taken place over the past few years that show why you see people being emboldened by hate crimes in the country."

The Southern Poverty Law Center (SPLC), which has documented 917 hate groups that are currently operating in the United States, believes that Trump has impacted the rise in hate crimes. "The words of our political leaders have consequences," Richard Cohen, the president of the SPLC, said in a statement. "President Trump has energized the radical right with his xenophobic rhetoric and has given bigots a license to act on their worst instincts. The most vulnerable people in our country are paying the price."

Since the election, discrimination against Muslims has increased and more Muslims say they fear for their place in American society. The Council On American-Islamic Relations (CAIR), which also collects its own data on hate crimes separate from the FBI's, reported that anti-Muslim incidents increased 9 percent from the previous year in 2016. So far for 2017, CAIR has recorded 195 anti-Muslim hate crimes.

"We have all witnessed the anger and prejudice that characterized last year's election season, and that is growing nationwide in the current political environment," Corey Saylor, director of CAIR's National Department to Monitor and Combat Islamophobia, said in a statement. "To reverse this disturbing trend toward increased hatred and societal division, we must stand up to bigotry and the targeting of minority groups."

The number of hate crimes motivated by bias against a person's race or ethnicity also increased last year, from 3,310 incidents in 2015 to 3,489 in 2016. Half of the hate crimes were motivated by racism against black people, according to the FBI data. One in 6 people were also targeted because of their sexual orientation, the report said.

"Rhetoric becomes physical violence unless you do something to change it. I think you seen a rise in Neo-Nazism and fascism grow in the country and when the president says they are good people on both sides, that creates an environment where if you are a person of Jewish descent, then you may be increasingly targeted," Michele Jawando, vice president of legal progress at CAP, tells Bustle. "Earlier this year we've seen the targeting of mosques and Sikh temples, we've seen black churches burned across the country so it all leads to the performance where people are acting out the physical violence against people who are different or not like them."

A wave of bomb threats against Jewish day schools, community centers, and synagogues earlier this year also illustrates the rise in hate crimes motivated by anti-Semitism. During the first three months of 2017, the Anti-Defamation League recorded 541 anti-Semitic attacks, compared to 281 incidents in the same period in 2016. The Anti-Defamation League attributed 34 hate crimes to the election alone.

In a statement Monday, Attorney General Jeff Sessions said that “no person should have to fear being violently attacked because of who they are, what they believe, of how they worship.” Sessions said that the Justice Department’s Hate Crimes Subcommittee will continue to “explore ways to expand and improve training for federal, state, and local prosecutors and investigators; improve data collection of hate crimes; and to create even better partnerships with local law enforcement and affected communities.”