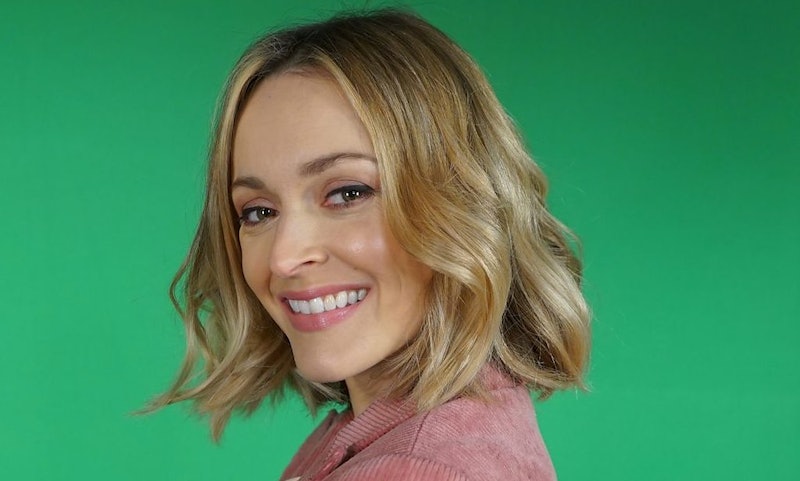 “My fashion was utterly horrendous, I was obsessed with [TV show] Blossom so I wore velvet hats,” laughs Fearne Cotton. Ahead of our conversation, the TV and radio presenter posted four throwback pictures to her Instagram page, each more '90s than the last. She hit all the key trends of the time: we’re talking crimped hair, highly-tweezed eyebrows, and Bacardi Breezers. But all this nostalgia is for good reason — Fearne Cotton's new BBC Sounds show is all about a defining era of her life. Sounds of the 90s sees her sit down with celebs that graced bedroom wall posters across the UK (Jet from Gladiators, anyone?) to spin some classic '90s tunes. With a lockdown in place across the UK due to COVID-19, she's staying at home with her family, and what better time to rifle through old photo albums and music collections? In these unprecedented times, reliving an era of Spice Girls and cassettes (remember those?) provides much-needed light relief.

The two-hour program is undoubtedly feel-good. Few music programs can successfully mix Prodigy's Firestarter with cheesy classics by the Vengaboys, but it's music the 38-year-old spent her teenage years listening to. Although the huge Spice Girls fan admits she wasn't at all cool back then. She started her career in 1996 aged 15 on children's TV, interviewing everyone from B*Witched to Samantha Mumba. She then progressed to documentaries, live television and, of course, fraternising with Keith Lemon on ITV2's Celebrity Juice. In recent years, she’s re-emerged as an "Earth Mother" (or at least that's what friend and fellow presenter Dermot O’Leary calls her), and her award-winning podcast Happy Place delivers wellness tips and relatable conversations. Sounds Of The 90s, though, is all about the music. I spoke to Cotton about her experience of lockdown, her hopes for the new radio show, and her stand-out '90s memories.

L'Oréal Blackett: Firstly, how are you coping with self-isolation?

Fearne Cotton: It’s just so strange, isn’t it? We are attempting home-schooling right now and it is absolutely relentless. My house currently looks like a jumble sale sh*t-show. I want to clean [everything].

LB: Now, your new radio show 'Sounds of the 90s’ is very feel good. What can we expect each week?

FC: The show was planned way before all this [coronavirus] happened. It’s very celebratory of what was an extremely interesting decade. Even more pertinent now, it’s a light relief from the current news cycle, and all the round-robin fear mongering texts. And we’ll keep it really feel-good and entertaining. We look back on the '90s with curiosity, examine all of those question marks — like, what on earth were we wearing etc? It’s a cultural celebration and music is at the heart of it."

LB: The first episode you had Jet from Gladiators and Jason Donavon — any other flashback heroes to listen out for? And who else would you like to invite on?

FC: So we had Jason Donavon, Melanie Black from All Saints, Keith Lemon, and Molly King from The Saturdays reminiscing about growing up. Then there's [actor] Will Mellor and [DJ] Trevor Nelson. I’d like to do some detective work, do bit of digging — for example, what's the actress from Blossom up to now? Or we could find the cast of Dawson's Creek.

FC: I don't think we always appreciate how diverse the music was. Every genre had its moment and it was musically extreme, from the poppiest pop to the grungiest grunge. We had the Brit-pop era and it was beyond cool. Bands were seeped in Britishness, in a way that we don't always see now. Of course in the mainstream, we had American bands like Nirvana and TLC who I loved so much. Yet, there was so much British talent. Just look at Spice Girls and Oasis. We can be proud of those bands and look back and know we were part of something.

FC: Well, we've had the Spice Girls and All Saints, so Hanson, for sure. I was a massive Hanson fan. I wonder what they're up to nowadays? That'd be a weird one. Yes, I think they've cut their hair.

LB: You've interviewed so many celebrities in your career but are there any '90s stars that leave you a bit starstruck?

FC: I watched a lot of Fresh Prince of Bel Air, so Will Smith. I've interviewed him before and he's as wonderful as you can imagine. Yet, if I met him now I'd still be a little starstruck. I was also completely obsessed with Thelma and Louise and Susan Sarandon.

LB: The '90s are know as one big fashion faux-pas — care to share yours?

FC: My fashion was utterly horrendous, I was obsessed with Blossom so I wore velvet hats. Then there was the waistcoats, platform trainers, crimped trainers, halter neck tops, boobs tubes and those awful Jelly shoes. They were dreadful.

LB: Can you recommend any feel '90s feel good tracks to listen to during lockdown?

FC: Well, my kids are seven and four and, I had on Spice Girls' Wannabe. My son had never heard of it and loves it. We have an Amazon Alexa, so he's got it on every two minutes, back-to-back, all day, if you can imagine what that's like. But it's bringing him so much joy. And we're keeping things simple. We're lucky to have a garden so we've filled it with obstacle courses. Weirdly, we're being forced to get back to basics. It's a difficult time right now but [that part of it] is no bad thing.