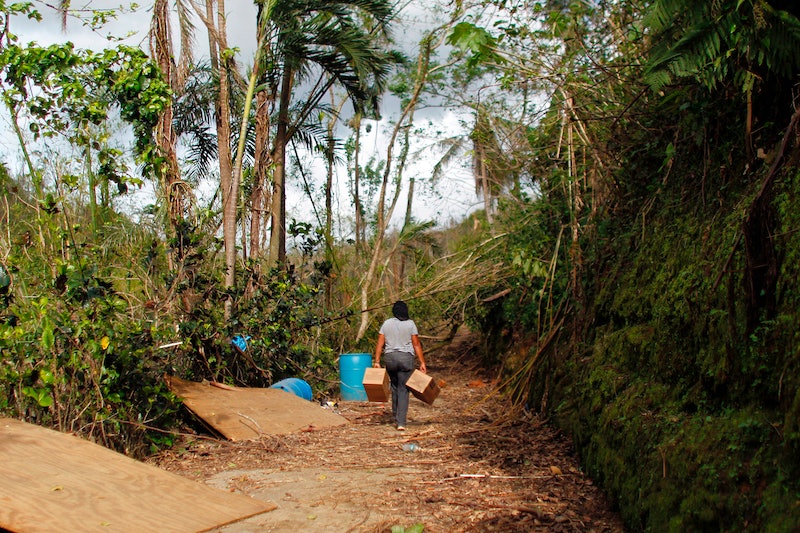 President Trump has faced waves of criticism over his administration's response to the catastrophic damage that Hurricane Maria wrought in Puerto Rico in September. According to a new report in ProPublica, the Federal Emergency Management Agency has for years had a 100-page plan for dealing with a potential hurricane on the island — and yet FEMA refuses to release its Puerto Rico hurricane plan to the public, citing "potentially sensitive information."

ProPublica writes that the report — officially referred to as a "hurricane annex" — was commissioned after FEMA was criticized for its handling of Hurricane Katrina in 2005, and it addressed what it and other government agencies would do if a large storm hit the island. The watchdog site further said that, while FEMA originally promised to provide a copy of the annex last week, the agency ultimately reversed its position and said that it would not do so.

“Due to the potentially sensitive information contained within the Hurricane Annex of the Region II All Hazards Plan, there are legal questions surrounding what, if any, portions of the annex can be released,” FEMA told ProPublica. “As such, the documents that you seek must be reviewed and analyzed under the Freedom of Information Act (FOIA) by FEMA.” It's unclear why the FEMA document would include "sensitive information." When ProPublica pressed further in regard to the supposed legal questions, FEMA replied, "We aren’t able to speak for DoD or the State of Hawaii.”

Until FEMA releases the plan, no one will know whether or not the Trump administration handled the crisis according to the books. Two weeks after the storm hit though, Trump boasted on Twitter, "Nobody could have done what I’ve done for #PuertoRico with so little appreciation"; however, not everyone is so confident.

Since the hurricane hit, 73,000 Puerto Ricans have fled the island to Florida, according to Florida Gov. Rick Scott. And as of this writing, over a month after the storm hit, over 73 percent of the U.S territory is still without power. Although it's too soon to assess the totality of the storm's devastation on the island, it's been estimated that Maria's damage to Puerto Rico could ultimately top $100 billion. Furthermore, the Trump administration also refused to extend a shipping waiver that had helped expedite aide to the island in the immediate wake of the crisis.

According to Trump, Puerto Rican officials are the ones botching the disaster response. After the hurricane hit, Trump complained on Twitter that local officials on the island "want everything done for them," criticized the "poor leadership ability by the Mayor of San Juan," and highlighted the country's debts to Wall Street — "which, sadly, must be dealt with," the president said.

More recently, a small two-person company with links to the Trump administration was awarded a $300 million contract to rebuild the island. That company, Whitefish Energy, was soon criticized by the mayor of San Juan, who accused it of being insufficiently transparent; Whitefish responded on Twitter by threatening to withdraw its aid workers from Puerto Rico. "We’ve got 44 linemen rebuilding power lines in your city [and] 40 more men just arrived. Do you want us to send them back or keep working?" the company asked on Twitter. It later apologized for the message. The House of Representatives as well as several U.S. Senators are currently investigating how and why Whitefish was awarded that contract.

ProPublica noted that, despite FEMA's refusal to release its Puerto Rico hurricane annex, it has publicly posted a similar preparedness document that it crafted for use in Hawaii. And that plan involved in-depth directions for restoring electricity — something that could have been of great value after Puerto Rico's power grid was wiped out.