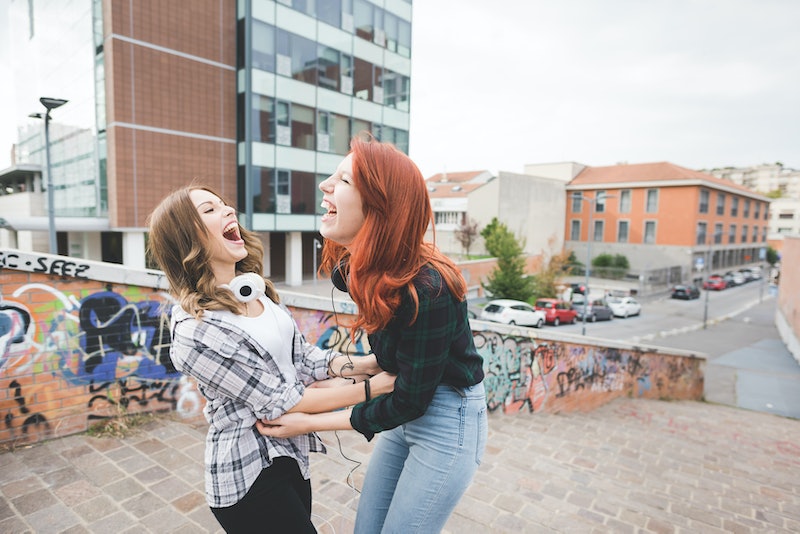 It's been awhile since a sexuality study was so roundly dismissed by so many people (sex-havers and scientists alike), but that particular dry spell is over. A paper out of the University of Nicosia in Cyprus argues that female bisexuality exists as a biological imperative because men like it. Lead researcher Menelaos Apostolou made this conclusion — surprise, surprise — by analyzing the survey responses of men. Even more cringeworthy? The paper, published in the journal Personality and Individual Differences, was titled "The Evolution of Female Same-Sex Attraction: The Male Choice Hypothesis." Gross.

He theorized that female bisexuality evolved because men were sexually interested in women who experienced low-key same-sex attraction. Women, in other words, are only bi to land a man. Apostolou also theorized that men liked women who were sexually interested in other women, because it decreased the likelihood that she'd seek extra-relationship sex with other men, assuaging their cuckolding fears.

There are obviously reaches aplenty here and the internet was swift to poke holes in all of Apostolou's theories. Diana Fleischman, a psychologist at the University of Portsmouth, commented on the study to IBT, saying, "The paper totally ignores a lot of other possible hypotheses and makes claims that are really not supported by the evidence they provide."

Plus, casual conversation with any queer woman will reveal a gaping inconsistency in Apostolou's conclusion: although straight men are typically quite chill with women's casual interest in other feminine women, as soon as a woman expresses attraction to a masculine-of-center woman, toxic masculinity tends to rear its ugly read. Bisexuality does not exist in a femme-on-femme vacuum, and if that study were repeated showing men photos of potential same-sex sexual partners for their partners across the gender spectrum, I bet there would be very different results.

Women's sexual identity doesn't exist in the service of male desire, no matter how men feel about it.