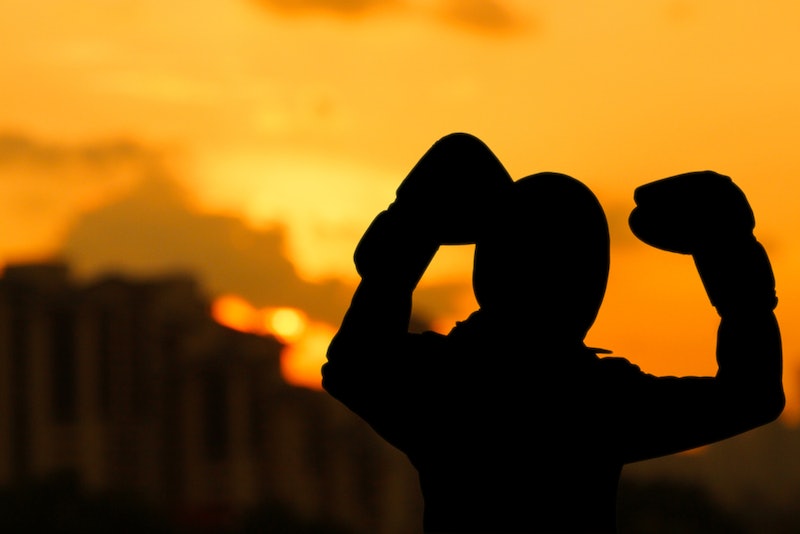 The International Boxing Association (AIBA) has made some major changes to its uniform rules. Female boxers can now wear hijabs and full-body uniforms for religious reasons, the Associated Press (AP) reports. AIBA said in a news release that the uniform rule change highlights the organization’s “commitment to gender equity and religious tolerance.” The organization said previous objections to wearing hijabs and full-body uniforms were “due to the material, which was not designed to fit the body and had potential to come off and interfere in the competition.” AIBA also said that today’s uniforms offer athletes options “that do not compromise the competition and, therefore, the health of the boxers, which has always been the priority for AIBA.”

The ban on wearing religious attire in boxing was just lifted in the United States in 2017, according to Bustle writer Claire Warner. The effort was led by Muslim teen boxer Amaiya Zafar, who wears a hijab, leggings, and long sleeves during boxing matches, says Warner, but had been disqualified from several matches because her clothing was considered in violation of uniform standards.

"As a Muslimah, I cover my body to show self-respect and my faith in God," Zafar says on her website. "Even after being told that I will not be allowed to compete in my Capsters sports hijab and Under Armour underneath my uniform, I have kept up my training. I train as if I have a fight every day."

According to NPR, USA Boxing initially said Zafar’s uniform posed safety concerns. “If you're covering up arms, if you're covering up legs, could there be preexisting injury? And then if someone got hurt during the event, the referee wouldn't be able to see it," Michael Martino, then-executive director of USA Boxing, told Minnesota Public Radio (MPR) in 2015.

Back in 2015, Martino told MPR that the rules of the international federation limited what officials could do about the uniform dress code and that, "we have 30,000 amateur boxers in the United States, so if you make allowances for one religious group, what if another comes in and says we have a different type of uniform we have to wear? You have to draw a line some place."

Zafar gained the support of the Council on American-Islamic Relations, a Washington-based civil rights group, which said sporting bodies like the International Weightlifting Federation and the International Federation of Association Football have lifted their bans on religious headgear, including hijabs, ABC News reports. In April 2017, USA Boxing granted Zafar a religious exemption to wear a hijab and full-body uniform in local matches, says ABC News.

Back then, Zafar had her sights set on the 2020 Olympics, but AIBA’s uniform rules hadn’t changed yet. "The [international] rule has to change eventually," Zafar told NPR in 2017. "Even if I don't get to compete in the next Olympics, I'm still young enough to compete in the one after that, and the one after that. [...] I'm only 16, so it's not like my time is almost up. But if I don't get a chance to compete, the little girls that I'm coaching right now — they'll get a chance."

Well, Zafar and so many other women and young girls just like her got their wish. The international boxing body has finally caught up, so it’s open season for anyone who wasn’t able to compete before because of these uniform restrictions. If you can dream it, you can do it, right?