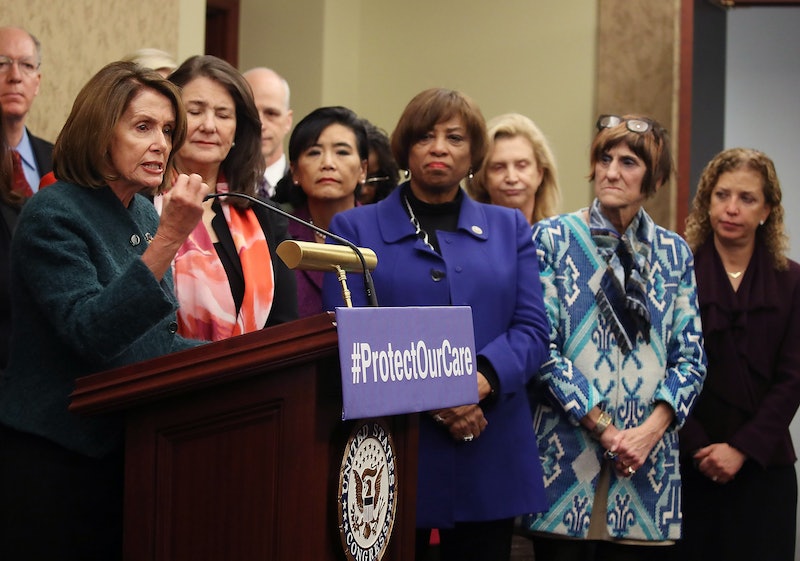 Since President Donald Trump's election, many women decided to run for office. Indeed, recent data revealed that so many women have chosen to place their names on the ballot in 2018 that female House Democrats could outnumber white men following the midterm elections. If Democratic women do surpass white Democratic men in the House post-midterms, this would mark the first time in history that this legislative arrangement has existed. And you can help make it happen.

The aforementioned data was collected by Legistorm and the Pew Research Center and recently visualized in a report from the bipartisan government relations firm Mehlman Castagnetti Rosen & Thomas. The report includes a visualization showing that, since the 1960s, the amount of men serving as House Democrats has significantly declined, while the amount of women serving as Democratic members of Congress has substantially increased. It notes that, in 2017, 39.7 percent of House Democrats were white men and 32.7 percent were women, demonstrating a relatively small gap between the two groups.

As The Hill reported, there is a record number of women running for seats in the House of Representatives this year. This means that, should these women succeed in their electoral races, there is a chance that women representatives could outnumber white male representatives among House Democrats for the first time ever.

Bruce Mehlman, the founder of Mehlman Castagnetti Rosen & Thomas, tells Bustle that the potential election of a significant number of Democratic women legislators highlights the changing nature of the Democratic party.

"The Democratic Party is increasingly reflecting the broader American population, a welcome diversification from the past and one that will surely enhance their ability to understand and represent the whole nation," Mehlman asserts.

As NPR reported back in April, 309 women are running for seats in the House of Representatives in 2018. As the outlet further noted, this represents a near-90 percent increase in the number of women running for House seats when compared to 2016's congressional elections (163 women ran in 2016). Moreover, the vast majority of these women candidates are Democrats. In fact, there are 127 percent more Democratic women running for Congress in 2018 than in 2016, compared with only a 28 percent increase among Republican women congressional candidates.

Thus, Democratic women outnumbering white Democratic men as congressional representatives in 2018 is something that is far from guaranteed, despite the vast increase in women's candidacies. Indeed, if you wish to help ensure that more women are elected to office in the 2018 midterms, there are several ways you can help achieve this aim.

First, you can consider donating to organizations that help support women's candidacies, like EMILY's List, She Should Run, and the National Women's Political Caucus, among others. These organizations encourage women to run for office and typically also provide resources and support during their campaigns.

Moreover, you can also advocate for women candidates by volunteering to campaign for your own congressional candidate, if applicable. You can use Ballotpedia's "Sample Ballot Lookup" to find out who is running for Congress in your district. You can then typically go on a candidate's website to discover ways to support them and/or volunteer for their campaign.

And, finally, you can also support women candidates by simply ensuring that you vote in the 2018 congressional midterms on November 6 — and by encouraging others to do the same.

Overall, this year Democratic women seem to have a serious shot at surpassing white Democratic men in the House of Representatives for the first time. If you wish to see this happen, your support for women candidates could play a crucial role in helping determine whether or not congressional history is made.