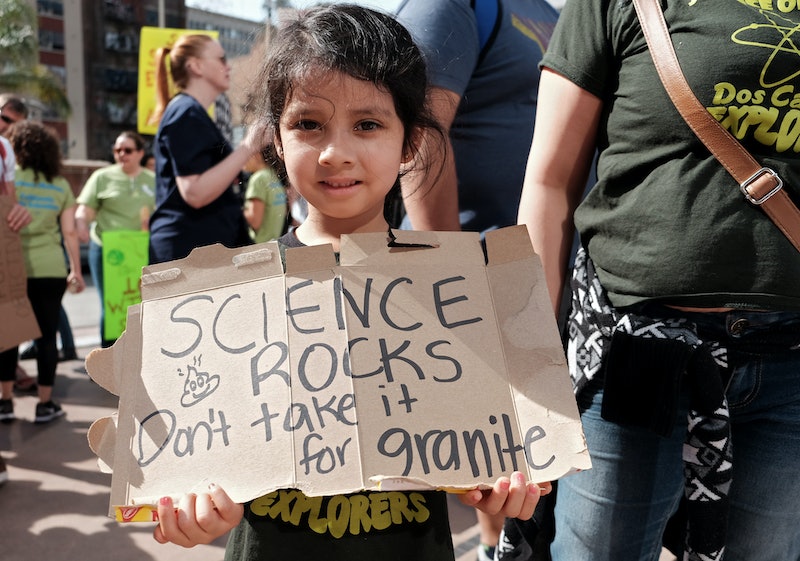 Many young girls dream of being scientists, following in the footsteps of Marie Curie and Dorothy Hodgkin to scale the heights of research and leave a lasting discovery or idea. But female scientists who have children often face rigid barriers to advancing their careers — and a recent study shows just how ingrained that problem is. The analysis from the Universities of Bath and Turin looked at the careers of 262 male and female scientists over a 10-year period, including citations (how much of their work is quoted by others), funding, and publications. And they found that female scientists often experienced a "motherhood penalty" that sounds a lot like sexism.

To be sure, this is a phenomenon across all industries, especially in countries that are less gender-equal, or where support for working mothers isn't as readily available. But in looking at mothers in one particular field, this study was able to quantitatively show the affect of having children on the individual level. When scientists became mothers, the researchers found, they weren't cited as often as their peers — possibly, the people behind the study say, because their assumption of childcare responsibilities mean they can't network as effectively or travel for conferences. But that wasn't all. Women overall, according to the numbers of the researchers, received less funding from big science organizations than men did, whether they had kids or not.

The researchers found a few possible explanations for this drop-off. One, the world of science funding continues to be very old-school, and the organizations that give out money are often much more likely to give out money to favorites, high-ranked people, and heads of laboratories. Two, the higher you go in the scientific disciplines, the fewer women you see. The combination of these factors, the researchers say, means that women rising through the ranks can't get the funding they need to make big scientific discoveries. Even if they're doing it unconsciously, places with money to give out in science often give it to men instead of women.

But having a kid is stressful, you might say. Of course new parents would be likely to see some drops in their professional output while they cope with a radically changed family dynamic. Not so fast. The study found that when male scientists became fathers, their work started to be cited more by others, reflecting more networking and more publications. The researchers think that this could be down to "the desire to provide for their new offspring". Hello, gender roles.

So what's happening here? Female scientists are being penalized if they decide to have a child and a career at the same time, because the world still expects women to carry the burden of the childcare. One 2016 study found that women do 40 percent more childcare and household chores than men on average, and another in 2015 found that 27 percent of women in senior business positions still said they did significantly more childcare than their husbands (44 percent of more junior women said they did). In contrast, male scientists who become fathers are given the freedom and space to pursue more work.

What needs to happen for there to be change? Well, for a start, universities and scientific institutions need to step up and give more help to female researchers with young kids. Travel funding, better paid maternity leave (or any, in the U.S.), flex-time; whatever it takes. But the world in general also needs to stop expecting one gender to do all the work when it comes to child care. Once we move past that, then perhaps we'll really make some progress — and stop losing out on the discoveries scientist moms could be making,