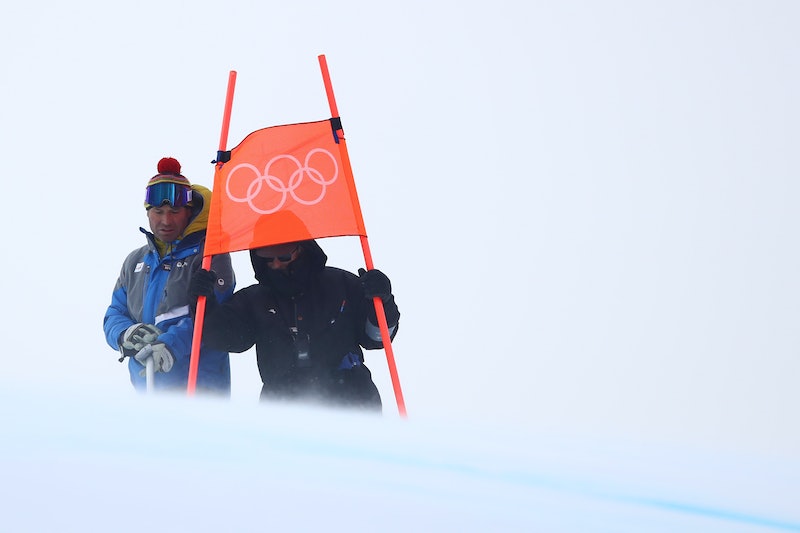 Competitions scheduled during the winter can be unexpectedly tough. On Monday, Olympic organizers faced criticism for allowing women to compete in harsh, brutally cold, and unrelenting winds during the games in PyeongChang, South Korea.

According to NPR, the region has been experiencing violent gusts of wind as competitors gathered for the women's slopestyle snowboarding game. This particularly daunting form of snowboarding requires favorable weather conditions that, ideally, don't leave athletes terrified for their well-being. Unfortunately, the gusts had gone up to a rapid and intense 45 m.p.h., knocking competitors' balance off, forcing them to resort to easier landing tricks in order to avoid getting throttled in the air by strong winds.

The organization that is under special criticism is the International Ski Federation (FIS), which athletes say forced them to play in dangerous conditions. One athlete from Austria, Anna Gasser, told NPR, "We tried to speak to officials but the Olympics put us under pressure to do it today."

Another athlete from Norway, Silje Norendal said to NPR, "All I wanted to do ... was sit up top and cry."

According to AFP, FIS has so far defended its decision to conduct the games in such challenging and potentially dangerous weather. "FIS always aims for the athletes to be able to stage their best performances, which some athletes have expressed was not the case today. But the nature of outdoor sports also requires adapting to the elements."

In another statement on Monday, FIS added, "The first priority is the safety of the athletes and FIS would never stage a competition if this could not be assured. The FIS Jury monitored the weather conditions closely throughout the day, including consulting with the coaches, and considered it was within the boundaries to stage the competition safely."

In a yikes-worthy compilation made by NBC News, videos show just how terrifying and treacherous the winds proved to be for the women competing. Gusts of wind threw heavy snow in the air while various athletes attempted to gain balance for landing. In one particular instance, an athlete can be seen losing her balance not once, not twice but a solid three times in the air as the wind hits her. Most athletes tumbled to the bottom, covered in snow.

To really understand how intense the conditions were, consider the words Jeff Passan, Yahoo! sports reporter, used to describe the situation:

The whipping wind — the same wind that prompted the International Ski Federation earlier in the day to cancel an alpine-skiing event — flung snowboard riders about the course at Phoenix Snow Park and impelled others simply to pull up before jumps, lest they subject themselves to shattered bones or shredded ligaments.

Passan also added that the "riders were convinced their well-being was sacrificed to the altar of the television networks that pay billions of dollars to program the Olympics." That doesn't sound too pleasant.

On a larger scale, the issue of harsh winds and allegedly poor decision-making by the FIS points to the danger women athletes were put into to perform for the Olympics audience. It stunned veteran athletes like Jenny Jones, from the United Kingdom, who participated in the 2014 Sochi Olympic Games.

Speaking the Mondy crashes with The Guardian, Jones expressed shock and criticism at the organization. "It was a total lottery. I wonder what went on in those conversations and why somebody didn’t say 'let’s postpone this.'"

She concluded that "Of course it’s not safe. It’s an extreme sport. You’re jumping off a 60-foot kicker and you’re almost sailing on your board. Luckily nobody was badly injured. I’d be asking why this whole thing carried on."