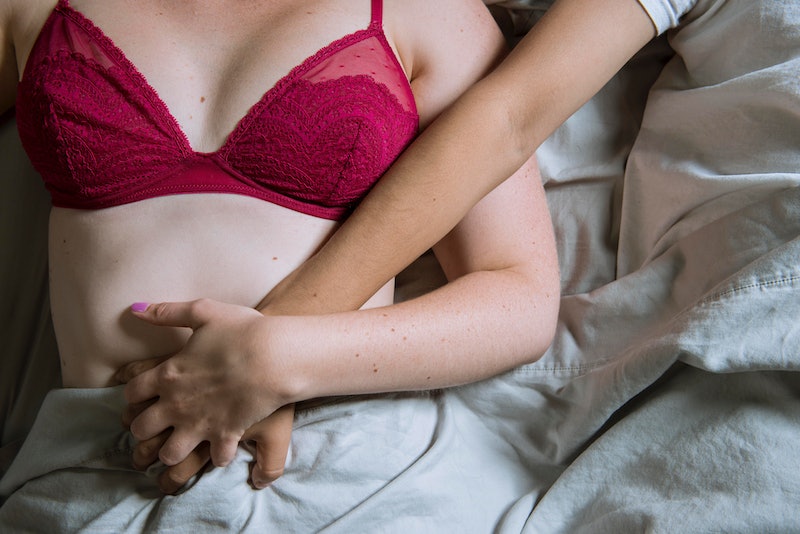 If you've ever been plagued by the nagging feeling that a massive relationship fight you just had with your partner isn't really over — even after you tried to process it! — then you know how miserable the feeling of instability that follows is. It might be worth knowing how experts define a fight you can come back from with your partner, so you can gauge whether or not suffering through that feeling is worth it.

One thing experts agree on, of course, is that physical violence in a fight is always a threat to someone's safety and it should never be tolerated. "Hitting, shoving, or grabbing your partner, or throwing something at or near them, obviously makes them feel unsafe, because now they are unsafe," licensed marriage and family therapist Jill Whitney tells Bustle. If you can't contain your anger in one situation, they'll always have the worry in the back of their mind that it might happen again."

Similarly, sex educator Domina Franco tells Bustle that it's incredibly important to remain mindful of the content of each argument. "Was the fight a disagreement where both folks were overall respectful of each other's base level humanity? Was it a case of not seeing the other person's perspective and getting heated?" Franco asks. "Or was it emotionally or physically violent, or based on a deal-breaker issue for one of you? Was the person demeaning and abusive, and was their approach a big *ss red flag telling you to quit this before you invest any more time and effort into the relationship?"

Ultimately, what defines a fight you can come back from, says Whitney, is whether the fight has fundamentally damaged the trust in your relationship. "Trust gets undermined if fighting gets really nasty, like mean, below-the-belt comments," she explains. "If they're awful enough, your partner might have trouble feeling safe with you, and emotional safety is essential for healthy relationships."

Knowing your triggers and being mindful of your secondary emotions — those beyond anger or frustration — is equally important, according to licensed marriage and family therapist Alana Ogilvie. Fights about division of labor or your partner not standing up for you in a conflict with a third party are rarely about the surface level issue.

"You argue about the dishes because when your partner doesn't do them, it may leave you feeling exhausted and unappreciated," Ogilvie says. "You fight about how your significant other talked to your mom because you may have loyalty to both of them and it tears you apart to see them not getting along. If you know why the issue really bothers you and you share that with each other instead of fighting, you get to a whole new level in the conversation."

And once couples reach that level, they frequently end up deepening their relationship — or, conversely, learning that the partnership is not compatible, but at least coming to terms with that in a more peaceful, accepting way. It's often much easier to grieve and move past a relationship when you can know definitively the reasons why it was wrong for you.

"A fight can be incredibly horrible and stressful but lead to a deeper understanding of your partner and the partnership," Franco says. "I think the fight itself is less material than how you feel after the dust settles."

It may be useful to keep in mind that the goal of a relationship isn't to avoid conflict at all costs; it's to find a partner who can skillfully and empathetically hear your feelings and take accountability with you in ways that help you grow.