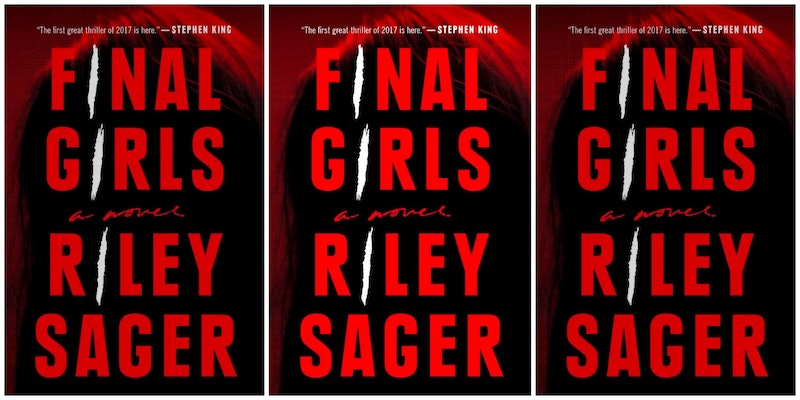 If the idea of steamy romances or sweet contemporaries taking over your summer reading list makes you want to gag, and you're looking to turn your beach trip into a chilling summer thriller where the lifeguard may be up to something and you wouldn't dare go in the water alone...well, Final Girls is definitely the book for you this season. (According to Stephen King, it's the "first great thriller of 2017.")

Author Riley Sager's book starts 10 years ago, when college student Quincy Carpenter went on vacation with five friends and came back alone, the only survivor of a horror movie–scale massacre. In an instant, she became a member of a club no one wants to belong to—a group of similar survivors known in the press as the Final Girls. Now, Quincy is doing well—maybe even great, thanks to her Xanax prescription. She has a caring almost-fiancé, Jeff; a popular baking blog; a beautiful apartment; and a therapeutic presence in Coop, the police officer who saved her life all those years ago. Her memory won’t even allow her to recall the events of that night; the past is in the past.

That is, until Lisa, the first Final Girl, is found dead in her bathtub, wrists slit, and Sam, the second, appears on Quincy's doorstep. Blowing through Quincy's life like a whirlwind, Sam seems intent on making Quincy relive the past, with increasingly dire consequences, all of which makes Quincy question why Sam is really seeking her out. And when new details about Lisa's death come to light, Quincy's life becomes a race against time as she tries to unravel Sam's truths from her lies, evade the police and hungry reporters, and, most crucially, remember what really happened at Pine Cottage, before what was started 10 years ago is finished.

The book will hit shelves on July 11, 2017...more than enough time to get your summer thrills in. But until then Bustle's got the exclusive first look at the book's trailer. Be prepared for some serious chills.