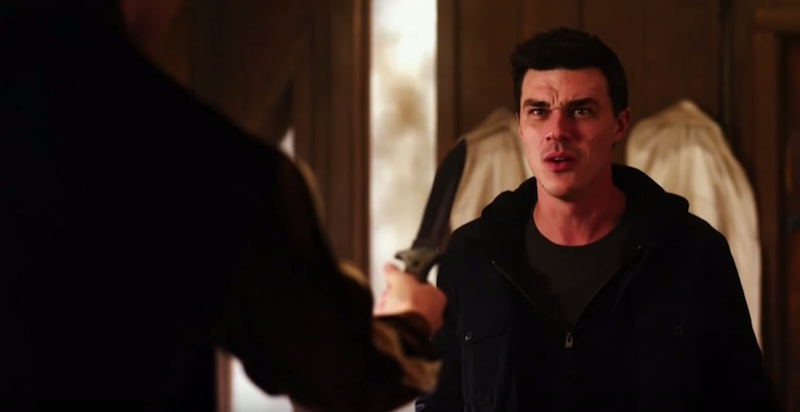 Spoilers ahead for Episode 8 of American Horror Story: 1984. American Horror Story loves to save its best surprises for last; Finn Wittrock's AHS: 1984 character is proof of that. As the promo for the upcoming Season 9 finale indicates, Wittrock will find himself immersed in the horrors of Camp Redwood when Montana and Trevor begin spooking him with some of their ghostly tricks. (Asking complete strangers to stab you is Redwood etiquette 101.) But this character is no random individual. In fact, he could very well hint at yet another significant time jump in the story and share an important connection to one of the central cast members.

In the brief moments Fittrock appears in the finale promo, he seems to be wearing modern day clothing. (Nothing says 2019 like a good zip-up hoodie.) Even his hairstyle appears to mimic a popular 21st century look for guys. This aligns with a recent spoiler that circulated a few weeks ago, when a makeup artist for the show posted an Instagram story that mentioned her work in the season spanned over multiple decades, including 2019. Given that there's only one episode left in the season, if there is another time jump, it would have to happen now.

What remains unclear is who this person from the future is (or even what his name is) and why he would come to a place that has been the host to so many horrific murders It's possible he's just another big horror fan hoping to catch a glimpse of a ghost or two (wish granted, if that's the case), but some fans think he'll serve a much more important purpose.

Multiple viewers are starting to suspect that Wittrock's character will be Bobby Richter, aka Mr. Jingles' adult son, who has come to the camp seeking answers about his family's dark past.

After his wife was murdered by the Night Stalker, Mr. Jingles left his son on someone else's doorstep, knowing that distancing himself from his child was the only way to keep him safe. Since then, Mr. Jingles has been determined to kill the Night Stalker in order to keep his son out of harm's way. Is Wittrock proof that he was ultimately successful in that mission?

Given that Jingles' son was born around 1989, he would be around 30 years old in 2019, which aligns perfectly with how old Wittrock's character looks to be (in real life, Wittrock is 35, which is close enough). It also makes sense that he would be curious about what happened to his biological parents and go to the camp seeking answers. However, if he isn't careful, he could end up following in his dear dad's footsteps and wind up in Redwood's ghostly army.