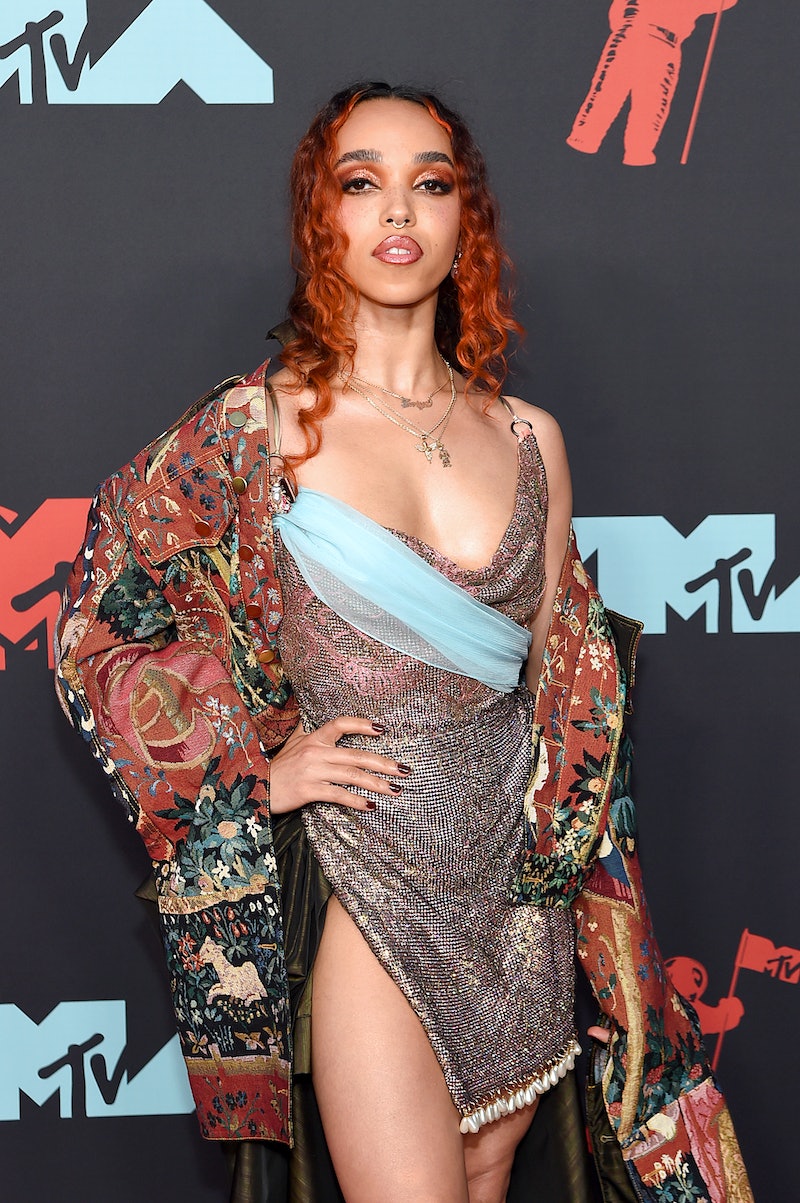 FKA Twigs looked like a literal work of art at the 2019 MTV VMAs, and wore custom Ed Marler to the red carpet. While decked out in a chain-mail dress and a Middle Ages-like cape, FKA Twigs wore her VMAs outfit to the mall after the show wrapped. The artist and her styling team drove straight from the VMAs ceremony in Newark, New Jersey to Brookfield Place, which is a Manhattan mall. FKA Twigs was craving a vegan burger, and so she hit up the food court in her custom couture.

As you can imagine, the artist turned a lot of heads. The mall is usually a place filled with shoppers in yoga leggings and messy top knots, so FKA Twig's custom Marler design was an unexpected look.

Matthew Josephs was FKA Twig's stylist, and broke down the details of the outfit on Instagram. Marler has done a series of outfits for the artist before, whether that was for her concerts or for editorial shoots. But the important thing to note here is that Marler loves opulence and is inspired by classical art — his Instagram is filled with it.

For FKA Twigs' VMA look, Marler created a crystal chain mail dress with a gilded lace overlay. The hem had a row of Victorian teardrop pearls hanging from it, and there was a turquoise chiffon sash draped across the mini. To clinch the look, Marler added a dramatic silk taffeta train.

But that's not all. Marler also created a custom "Lady and the Unicorn" tapestry jacket to put on top of the dress, which wrapped the singer in a museum-like outerwear piece.

"The look was custom made by Ed Marler, who is a close collaborator of Twigs'. The look was inspired by 'The Lady and the Unicorn' tapestry, and it was supposed to be a modern depiction of the lady in the imagery," Josephs tells Bustle. "The jacket was actually made from reproductions of the tapestry."

Marler posted a photo of the "Lady and the Unicorn" tapestry onto his Instagram. The tapestry is part of a series of six tapestries woven from wool and silk in the Middle Ages. The designs were drawn in Paris around 1500, and its known as everything from "the Mona Lisa of the Middle Ages" to a "national treasure of France."

So FKA Twigs took this Middle Ages-inspired outfit, packed herself into a car, and went to the mall to get a late-night dinner with her glam team. And luckily for us, Josephs captured the artist's strut in the food court as passerby turned their heads.

"Getting a burger was my idea, I’d been desperate for an Impossible Burger since we got into New York!" Josephs shares. Impossible Burger is a plant-based, vegan patty. "We don’t have Impossible Burgers in the UK yet, and Twigs is vegan and I’d just stopped eating meat a couple of months ago, so it’s all I’d been talking about for the last four days."

Josephs confirms that FKA Twigs made a splash while in the food court. "Twigs definitely turned heads. The dress is made from crystal chain mail with a lace overlay, so it really sparkles when she moves. You couldn’t not look at her!"

While out of place, FKA Twigs owned her unique outfit among the crowd of jean and T-shirt wearing shoppers. But then again, this isn't the first time that the artist dressed like an oil painting, so she's probably used to it.

In May 2019, she wore another custom Marler look while on her Magdalene tour. FKA Twigs wore a taffeta oxford shirt and an 18th-century inspired robe.

Then when FKA Twigs was performing in Berlin that same month, she wore a custom look made by Marler called the "Princess in the Tower" tracksuit. It had a Victorian ruff, puffy sleeves, and even glowed neon.

Throwing it even further back, FKA Twigs looked like a woman of the high court back in 2017, when she wore a baroque Versace gown.

FKA Twigs is art personified, both on the red carpet and in line for fast food.