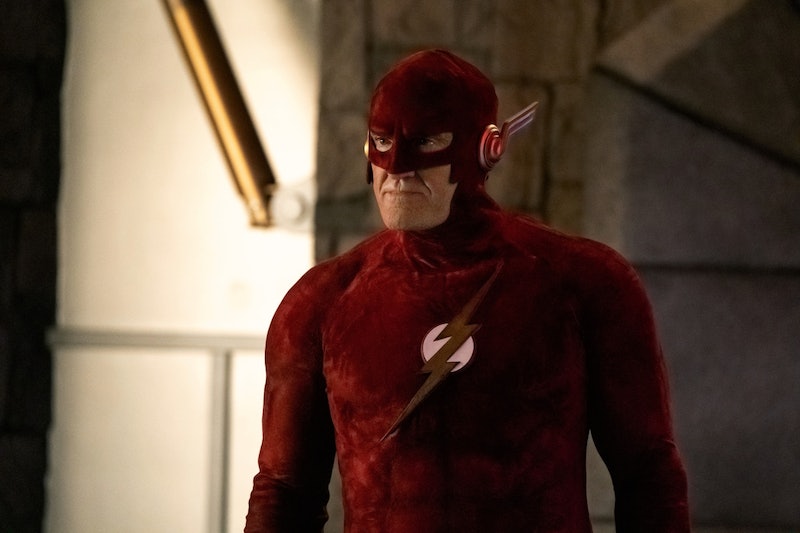 Warning: spoilers for "Crisis on Infinite Earths Part 3" ahead! Just as the Monitor had foretold, The Flash met his demise during the Dec. 10 installment of the Arrowverse crossover. Only it wasn't the Barry Allen anyone had expected. Earth-90 Flash, played by John Wesley Shipp, sacrificed himself in order to save the multiverse, but his courageous act didn't just end there. The Flash's death on "Crisis" saved Earth-1's Barry Allen (Grant Gustin) from having to make that sacrifice himself.

For quite a while now, Barry has known that the Flash's destiny was to mysteriously vanish. So when a speedster was needed to hop on the cosmic treadmill and destroy the Anti-Monitor’s anti-matter cannon from wiping out the multiverse, he knew the time had come to fulfill his tragic fate. However, Earth-90 Flash decided to take the burden on himself, temporarily stealing Barry's speed and taking his place.

And while hopefully these CW superheroes will be able to find a way to reverse a great deal of the destruction the Anti-Monitor has caused, Earth-90 Flash's death felt particularly permanent, especially given the very touching tribute the character received just before he vanished into dust. This included a brief throwback clip from Shipp's 1990's show of The Flash.

If this Flash's death remains permanent, then The Flash's Barry no longer has a grim destiny to fulfill. It's basically the one good thing to come out of this terrible tragedy. Flash showrunner Eric Wallace and executive producer Marc Guggenheim opened up about their decision to kill off Shipp's Flash during Entertainment Weekly’s after-show Crisis Aftermath, which aired on The CW immediate after the episode. “You have gotta come up with a way to honor what was said with the Monitor in [The Flash] 601 saying the Flash must die," Wallace told Crisis Aftermath host, Kevin Smith. Earth-90 Flash allowed them to do that, because as Shipp's character pointed out — the Monitor never specified which Flash needed to die.

As for the actor himself, Shipp was grateful to see his character get a proper ending, even if he had to wait 30 years to see it happen. Shipp's own show of The Flash was canceled after its first season and was never given a proper series finale. "Crisis" allowed Shipp to finally see his speedster's story come full circle. "John, he told us I think afterwards, ‘Thank you for giving me this opportunity to close a chapter,'" Wallace added.

That certainly makes it sound like Shipp will no longer be popping up in Central City moving forward. But as heartbreaking as that is, it bodes well for Barry's fate. Though, considering that Iris just crumbled into dust and the Anti-Monitor is still at large, he isn't out of the woods completely just yet.

More like this
Netflix Shut Down 'Bridgerton' S3 Rumours About A “Very Dark” Storyline
By Bustle
This 'Gossip Girl' Wardrobe Error Has Gone Viral On TikTok
By Alyssa Lapid
'The Last Of Us' Has Officially Been Renewed For Season 2
By Darshita Goyal
The 2023 Super Bowl Commercials Feature A 'Breaking Bad' Reunion & Missy Elliott
By Alyssa Lapid
Get Even More From Bustle — Sign Up For The Newsletter
From hair trends to relationship advice, our daily newsletter has everything you need to sound like a person who’s on TikTok, even if you aren’t.