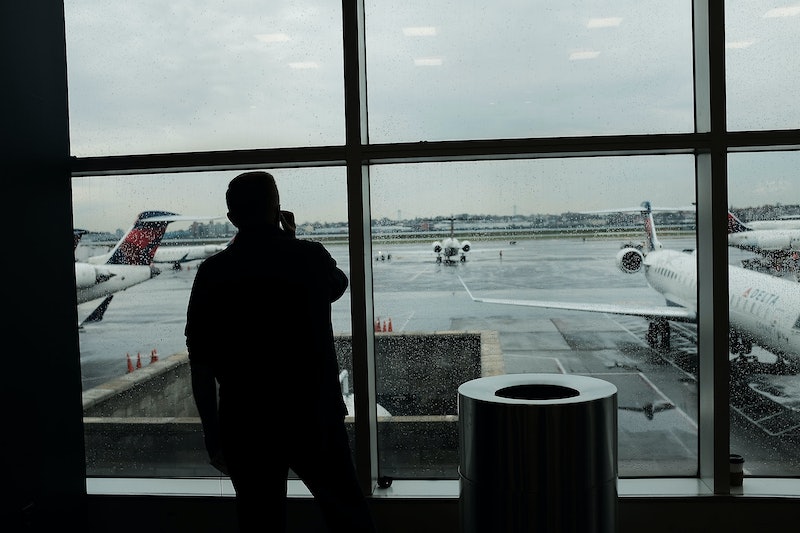 In the past 35 days, the ongoing partial government shutdown has affected federal workers, federal courts, national parks, and those who rely on government assistance to name only a few. Now it's reportedly impacting air travel, too. Staffing issues potentially related to the shutdown caused flight delays at two major airports Friday.

According to flight delay information made available through the Federal Aviation Administration's (FAA) website, air traffic at New York City's LaGuardia Airport and New Jersey's Newark Liberty International Airport experienced gate holds and taxi delays on Friday due to staffing issues. At one point, the FAA temporarily halted flights into LaGuardia due to the staffing shortage, The Washington Post reported. Bustle has reached out to the Port Authority of New York and New Jersey for comment.

A slight increase in the number of employees reported to be out on sick leave at two air traffic control facilities had caused the FAA to adjust its operations, Bloomberg has reported the agency said in a statement. Operations at impacted air traffic control facilities were reportedly adjusted to match available staff resources and ensure minimal impact to efficiency while maintaining consistent levels of safety, the agency said. The FAA encouraged travelers to stay on top of flight status updates via either their airline or fly.faa.gov.

The delays come just days after a number of unions warned that the ongoing government shutdown had put the aviation industry at a level of risk not calculable. "In our risk averse industry, we cannot even calculate the level of risk currently at play, nor predict the point at which the entire system will break," a joint statement released Wednesday by the National Air Traffic Controllers Association, the Air Line Pilots Association, International, and the Association of Flight Attendants-CWA said. "It is unprecedented."

The unions said the shutdown had spurred a "growing concern" regarding the safety and security of not only its members and the airlines they worked for but for the traveling public as well.

In response, the FAA issued a statement of its own claiming that air travelers "can be assured that our nation's airspace is safe" as the agency "continually reviews and analyzes its performance to assess its safety and efficiency."

On Friday, President of the Association of Flight Attendants-CWA Sara Nelson said the staffing shortage was "exactly what AFA and other aviation unions have been warning would happen."

"The aviation system depends on the safety professionals who make it run," she said in a statement. "They have been doing unbelievably heroic work even as they are betrayed by the government that employs them." Nelson urged lawmakers to end the shutdown and re-open the government immediately, arguing that, "Our country's entire economy is on the line."

Although neither the FAA nor any airport has explicitly connected the staff shortages to the ongoing partial government shutdown, thousands of air traffic controllers, Transportation Security Administration (TSA) officers, safety inspectors, and air marshals have been forced to work without pay as a result of the shutdown.

"It is simply impossible to maintain an elite level of safety and security with a workforce that is exhausted, hungry, and financially anxious," Bloomberg reported American Federation of Government Employees National President J. David Cox said in a statement Friday. "Members of the traveling public should ask themselves: Is the system more or less safe when TSA officers, air traffic controllers, and others are coming to work stressed, distracted and exhausted?"