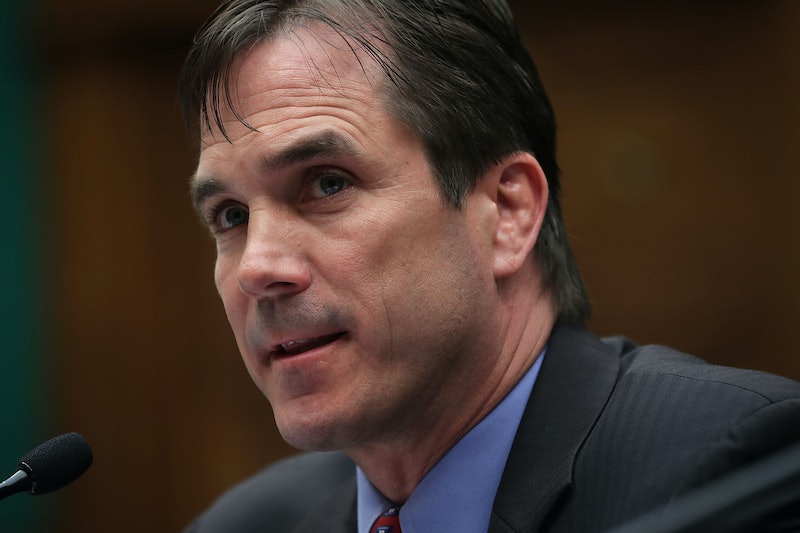 It's been out of the mainstream news for a while, but the consequences of the Flint, Michigan water crisis are still coming out. As the city works to replace its old pipes, there's still the question of accountability for the whole crisis — but now, the courts have taken a step towards working that out as well. The Michigan health chief will go to trial for several felony charges, including involuntary manslaughter, over his role in Flint's problems.

The Detroit News reported that Nick Lyon, the head of Michigan's Department of Health and Human Services, will soon face trial, after Judge David Goggins ruled that his behavior had been "corrupt."

"I do find based upon the totality of all the evidence ... I find this behavior over this time period of withholding information corrupt based upon misconduct in office for probable cause standards," Goggins said, The Detroit News reported. He was referring specifically to Lyon's role in handling an outbreak of Legionnaire's disease in Flint, which, according to NPR, was caused by low levels of chlorine in Flint's water. Lyon is being charged with two counts of involuntary manslaughter over two of the men who died in the Legionnaire's outbreak, and one count of misconduct in office over his alleged obfuscation of information in the case.

According to the Associated Press, over 90 people contracted Legionnaire's disease in the county where Flint is located, and at least 12 died. Judge Goggins, according to the AP, said that Lyon could have prevented those two deaths if he had informed the public of the outbreak, but he failed to do so — which the judge found to be "corrupt."

“It’s a long way from over,” Lyon said to the AP, after the judge announced his decision.

The decision prompted a number of reactions, from the attorneys on both sides and from activists who have been pushing for government officials to be held accountable.

“He withheld the truth. There’s no excuse,” Karina Petri, an activist, told the AP. “He could have changed hundreds of lives.”

Lyon's defense team, however, was not pleased with the result. According to The Detroit News, the defense attorney believed that the judge's decision was based too much on the prosecutor's evidence, leaving out much of what the defense laid out.

"(Lyon) is not vicariously liable for all 14,000 employees in the Department of Heath and Human Services," Lyon's defense attorney said, CNN reported. "He certainly is not vicariously liable for the actions of the DEQ or even the governor's office. To put all the blame at his feet is just ignoring the problems that were inherent in this whole mess."

Back in February, The Detroit News published the results of a study linking the Legionnaire's outbreak directly to Flint's change in water quality. Even at the time, they wrote that this finding would hurt Lyon's defense — which has now turned out to be correct.

“We’re not looking at today as a win or a loss. We’re looking at today as the first step and the next step for justice for the moms, dads and kids of Flint,” said a spokesperson for Michigan Attorney General Bill Schuette, whose office initiated the investigation, the AP reported. "The attorney general is very proud of the work done by Mr. Flood [the special prosecutor] and our Flint water team, and we're continuing to press forward in this case and several others."