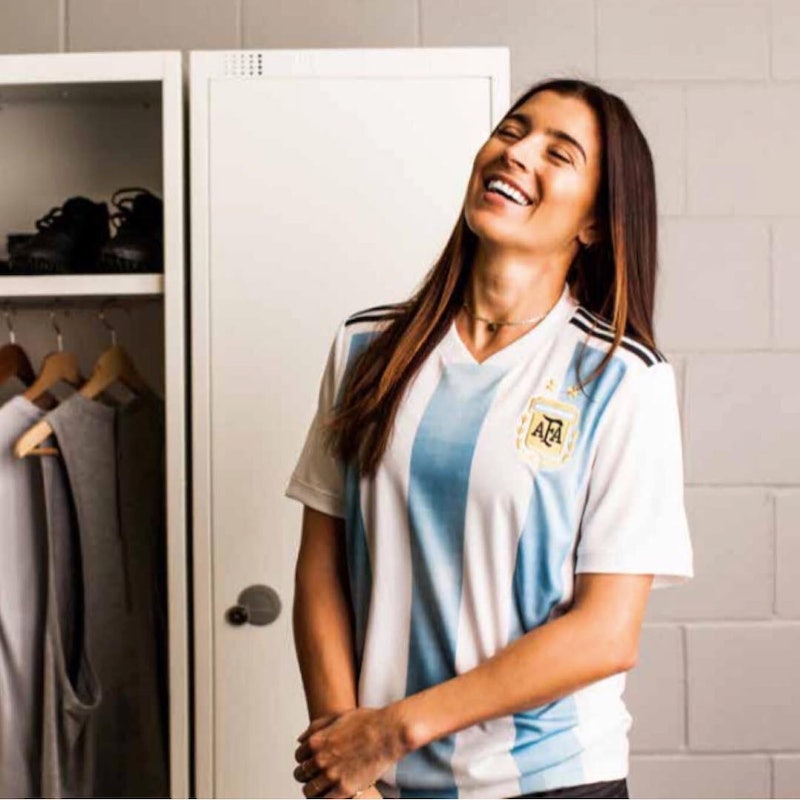 My first sport was actually swimming when I was three years old. I started playing tennis when I was very young as well because I looked up to Gabriela Sabatini and Steffi Graf, all those amazing athletes. But when I got to play soccer on a team with a bunch of other girls, I thought it was rad. I remember being seven years old and playing in Miami and just thinking, now I have 15 sisters, and we get to kick a ball around and have fun. I remember thinking, I want to do this forever.

I was born and raised in Miami, but my family was very adamant that I travel to Argentina, where we’re from, every single year. Soccer is pretty much our number one sport. In Argentina, soccer is a religion — you eat and breathe soccer. So I grew up seeing and hearing about soccer all the time. I became obsessed. I played for West Kendall Optimist Soccer Club when I was seven years old, and I played with the Olympic Development Program in Florida when I was in high school. I ranked in the top 100 youth players in the United States.

Then, when I turned 17, I totally destroyed my ankle. I was heartbroken because I was just so focused on going to college and going pro. I just stopped playing. My parents told me that I didn't have to play soccer, and that I should just move on.

No boy could break my heart the way that soccer broke my heart.

So because of that injury, I shut it out of my life. No boy could break my heart the way that soccer broke my heart.

I decided to go to design school in New York instead, and I went to FIT for advertising and marketing. I started interning at NYLON Magazine in the fashion department and I thought that world was really cool. I started to DJ as well, and I DJ’d for Kanye during the Watch The Throne tour. I became a very well-known DJ for the 10 years when I wasn't playing soccer.

But I missed being an athlete. I need to run, sweat, kick a ball. So when I turned 29, I decided to run the New York City marathon after not being athletic for a decade, except for practicing yoga. But I did it. After running the marathon, I thought about playing soccer again. I was 30 when my soccer career just got back into line, onto the path I was supposed to be on.

Four years ago, I went pro, and made Argentina’s women’s national soccer team.

Going to training camp for the first time felt just like being at the Olympic Development Program, because you know you're going into something amazing, but you don't know what to expect, and you don't know how you're going to perform. It's a dream to be called back to each training camp. My family in Argentina was floored, especially my dad. Growing up he wasn't around too much, but in this second part of my life, he's become my number one fan. He's watching women's soccer now because I'm playing at this level. Even though I'm not traveling with the team to the World Cup this year — the 23 athletes going have all been working toward this since Argentina last qualified 12 years ago — the door is still open.

We're lucky that we have these women who are ballers and win World Cups and Olympic games, but soccer is still seen as a man's sport. When I was a tan Floridian blonde-haired little girl playing soccer with the boys in Argentina, people would question why I wasn't playing field hockey. I would just say, "Because I’m a soccer player." I'd never let them make me feel bad. And I've never felt bad about playing soccer or sports ever in my life.

To this day, I’ll have a taxi take me to the training camp for the national team in Argentina, and the driver will ask why I'm going there, or if I'm a massage therapist. I say I'm on the women's national soccer team. And they're like, wow, there’s a women's national soccer team? They have no clue. [The culture] is starting to shift, but it's still very old school. People are still very closed off to the idea of women playing soccer.

Argentina has always been top five in the world for soccer. We've won the World Cup twice. We've had the best soccer players in the world, like Diego Maradona and now Lionel Messi. But now we're just not winning anything. Everyone obviously expects Argentina to be number one, but the men's soccer team is a heartache. Now, the women's team is finally getting minimal shine. This year, the Argentine Football Association (AFA) granted the league professional status — we used to be considered amateur. Now that we're going to the World Cup, we're thankful to be moving forward, but we know that we might not win because we've never had proper training. We might not do well, but it's a start.