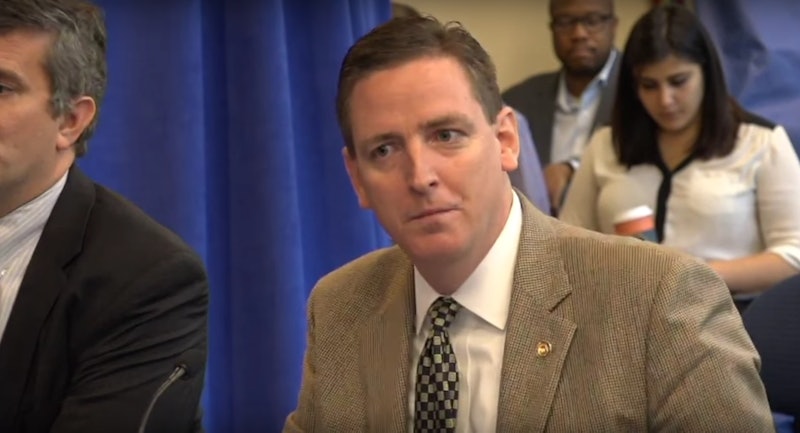 Less than three weeks into the job, Florida Secretary of State Michael Ertel has resigned after photos of him mocking Hurricane Katrina victims while wearing blackface were published in the Tallahassee Democrat. The pictures show Ertel, who was appointed to his position by Gov. Ron DeSantis in December, with blackface, fake breasts, hoop hearings and a shirt reading "Katrina Victim" at a 2005 Halloween party.

“Secretary Ertel submitted his resignation effective immediately," a spokesperson for the Florida Secretary of State's office tells Bustle in a statement.

At a press conference Thursday, DeSantis called the scandal "unfortunate," as Ertel has "done a lot of good work." He said that he accepted Ertel's resignation because he doesn't want to "get mired into kind of side controversies," but he didn't denounce Ertel's actions.

Ertel was not a private citizen when the photos in question were taken; rather, he was the supervisor of elections for Seminole County, a position he'd been appointed to by then-Gov. Jeb Bush.

DeSantis himself has faced widespread allegations of racism due to several unrelated comments and actions he took during his 2018 campaign for governor. In August, he warned voters not to "monkey this up" by electing his black opponent, then-Tallahassee Mayor Andrew Gillum. In another incident, DeSantis accepted and refused to return campaign donations from a man who'd once referred to Barack Obama as a "Muslim n***er," while in another, he defended a supporter who said that Florida should "bring back the hanging tree."

“I’m not calling Mr. DeSantis a racist," Gillum said during a debate. "I’m simply saying the racists believe he’s a racist.” DeSantis responded accusations of racism by saying that he's "not going to bow down to the altar of political correctness."

Although Ertel had been in the secretary of state's office for less than a month, his resignation may further complicate Florida's implementation of Amendment 4, the ballot measure passed in November that will eventually restore voting rights to as many as 1.5 million felons in the state.

DeSantis has argued that Amendment 4 shouldn't be implemented until he signs a bill doing so. Other officials, including the Republican president of the Florida state Senate, say that the amendment's language made clear that it was self-implementing, and that it's already the law of the land.

As secretary of state, Ertel was in charge of overseeing elections and voter registration in Florida, and he had instructed his office to implement Amendment 4 immediately and begin accepting registration forms from eligible felons. It's unclear who his successor will be, or whether they will adopt his stance on Amendment 4.

In his resignation letter, Ertel wrote that it "has been an honor to serve you and the voters of Florida," according to the Tallahassee Democrat.