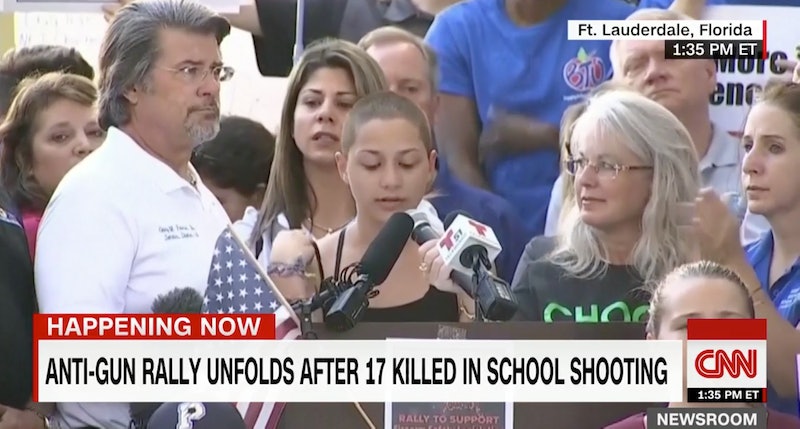 Just days after a gunman at Marjory Stoneman Douglas High School killed 17, most of them students, senior Emma Gonzalez is speaking out for gun control. She spoke at a gun control rally in Fort Lauderdale, Florida, on Saturday and called on President Trump and Congress to act. Gonzalez promised that she and her entire school community would work together to change the law and ensure that this is "the last mass shooting."

Much of her speech was directed at President Trump. She called out his tweet that blamed the Florida shooting on the shooter's mental health. "So many signs that the Florida shooter was mentally disturbed, even expelled from school for bad and erratic behavior," Trump tweeted in the days after the shooting. "Neighbors and classmates knew he was a big problem. Must always report such instances to authorities, again and again!"

She took issue with his solutions, particularly his implication that the students hadn't reported the shooter's behavior and it was somehow their fault. "We did, time and time again, since he was in middle school," Gonzalez said, noting that it was no surprise who the shooter was.

"We know that they are claiming that there are mental health issues, and I am not a psychologist, but we need to pay attention to the fact that this isn't just a mental health issue. He wouldn't have harmed that many students with a knife."

Gonzalez said it's time to stop blaming the victims for what happened. "How about we stop blaming the victims for something that was the shooter’s fault?" she yelled into the crowd. Rather she blamed those who sold the shooter the gun in the first place. "Those at the gun shows, the people that encouraged him to buy accessories for his guns to make them fully automatic," Gonzalez added.

The student didn't shy away from one of the biggest complications to the gun control debate, money:

If the president wants to come up to me and tell me to my face that it was a terrible tragedy and how it should never have happened, and maintain telling us how nothing is going to be done about it, I’m going to happily ask him how much money he received from the National Rifle Association. I already know — $30 million.

She did some math to confront the president with too. "Divided by the number of gunshot victims in the United States in the one and a half months of 2018 alone, that comes out to being $5,800,” she told the crowd. “Is that how much these people are worth to you, Trump?"

The crowd was with her, chanting "Shame on you!" after her attack on Trump's election contributions from the NRA.

In addition to calling out the president, the NRA, and other elected officials, who she said "sit in their gilded House and Senate seats funded by the NRA," Gonzalez called on her classmates and community members to take action.

With new voices like Gonzalez's, the dialogue on gun reform may actually go somewhere.